To whom should the finger of blame point? 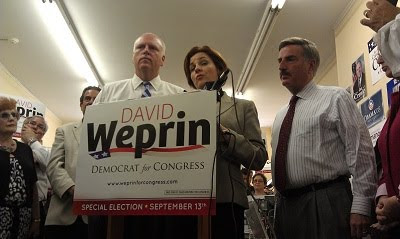 So whose fault was the Weprin loss?

My guess is all of the above, plus the candidate himself.

And who is the biggest loser in the whole Dem debacle? The Forum says it's Crowley.

True News from ChangeNYC.org has this to say:

In addition to the Democratic Campaign Committee taking over the election the last week and sinking over $600,000 in the dummy Weprin campaign, the local consultant group Parkside was mostly responsible for the poorly run campaign. In addition to making over $2 million last year from the State Senate Democrats for losing control of the senate, Parkside, who is joined at the hip with corrupt Boss Crowley, has more power to make money from government than any dictator anywhere in the world.

The good news for all of them is that the 2 hacks that were chosen for vacant assembly seats both won in landslides and that Allen Jennings was beaten back again.

Photo from Capital New York.
Posted by Queens Crapper at 12:11 AM

The democratic party has really lost its way.

The democrats primary objective is to make middle-class families as dependent on the government as possible.

Maybe their self serving ways are starting to be noticed.

"..corrupt Boss Crowley, has more power to make money from government than any dictator anywhere in the world."


Has this writer ever traveled, or even read about the world's dictators?

Whatever some two-bit borough pol could amass is lunch money for the (mostly rightwing) dictators of the world.

Tell me whose going to beat him, nobody who's running so far.

It was Parkside's race to lose and they did!

When will the black Queens Dems make a move and oust this loser already?

Goodbye Joe Crowley - start looking to be CEO of Parkside since you won't have a job soon enough nor will your club members. Even Elizabeth can beat her cousin - at least she works hard to make the community better - unlike what Joe has accomplished in the past - nothing.

Its the systems fault plain and simple. A loss is a loss because the people came out and voted as should be the case.

good bye joe, liz and the dykie one...

Elizabeth works hard to make her community better? The Parks Dept told us yesterday that they haven't been pressured by the electeds to make a park out of St. Saviour's, they have been pressured by members of the community. She also promised to fund the effort this year and didn't put a dime toward it.

What work is she doing?

Queens Democrats will be doomed until they end the pay-to-play game that makes it so that if you hire Parkside Group you get the Democratic party endorsement?

Evan Stavisky lives in Rockland County but still controls the District Leaders by getting elected using an empty apartment in North Flushing.

The Parkside hacks are dooming the Queens Dems!

we are stuck with the staviskys
there are no individuals that are WILD to enough to challenge them.

I am a Democrat and when you saw weprin on the news with christine quinn screaming at the top of her lungs it made me realize that maybe it was time to vote for a republican.

It's time for Evan Stavisky to go. Queens Democrats deserve a district leader who does not have an obvious conflict of interest, is independent and actually lives in the district.

While we're on the topic of living in the district, what about Joe Crowley? He admitted he lives in Virginia with his family, but uses his mother's Woodside address. Isn't that against the law? How can he dictate what's best for Queens when he doesn't even live here? Time for Joe to Go! When will the press, the Board of Elections or someone in authority investigate this matter?

In the real world, if my boss knew I was taking time off my job to look for another job, I would be fired without question. If I lost a campaign, I'd be laid off too.

Both Joe and Elizabeth Crowley are totally incompetent elected officials. They both have a big hand in the decline of Queens County. It should be everyone's mission to rid Queens of the Crowleys before they can do irreparable damage.

This hurts Crowley in the big national picture. He wants to get into the House leadership on the basis of his ability to deliver Queens and Bronx, and keep all the Queens Dems in line with the party. This was a test of his political ability and competence in which he failed. It lessens his chance to follow Rangel on Ways and Means when Rangel retires/dies, or otherwise climb the Dem ladder in the House.

This hurts the parkside group.
looks like joe addabbo is gonna have a viable race next year.and the parkside dream of controling state senate will be in jeopardy.
Gay Marriage may be an agenda for bloomberg and co. but not for the voters in howard beach. i wanna see a coumo robocall get addabbo out of that mess. ha ha better yet send the queens young dems sent there sandals and nose rings to rally voters on crossbay blvd. addabbo and tony avella are toast next year.

Give 'em all the finger!

Could this be the beginning of the end
of the Democratic dictatorship of Queens?

we should be that lucky

This hurts the parkside group....

Nothing hurts The Parside Group. They still get paid, not matter what the outcome of the election is.

In your dreams, bub. The Governor is more popular than ever, and, in any case, there's no recall system on the books in New York State and Avella and Addabbo are going to get reelected. And you know it.

"When looking for faults, use a mirror, not a telescope!" (1980, Rev Dr John Poulos, NYPD St Paul Society)

"The fault, dear Brutus, is not in our stars, but in ourselves, that we are underlings."