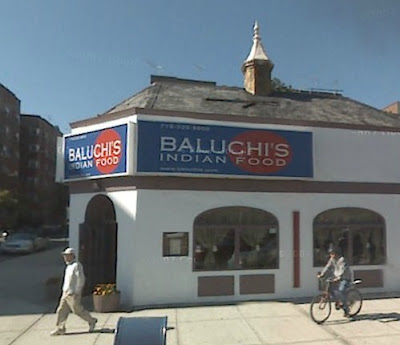 Two patrons filed suit against the Baluchi’s restaurant chain yesterday over claims that their bill was illegally padded with an “automatic” 18 percent gratuity reserved for South Asian customers.

Abe Shah and Hema Virani also charge that they were physically attacked by a worker after leaving Baluchi’s eatery in Forest Hills, Queens, without paying the alleged ethnic surcharge.

According to court papers, Shah, who is of Pakistani descent, and Virani, who is Indian, were slapped with the mandatory gratuity when they got their check on May 12.

Shah demanded to speak with the manager, who admitted that the restaurant added the charge for “Indian, Pakistani and Bangladeshi customers because ‘they never tip,’ ” the suit says.
Posted by Queens Crapper at 12:51 AM

I thought this place was closed several times by the board of health??

Ah: so we're caught between cultural mores and workers' rights? Seems to me all restauraunt workers should get minimum wage - that would make tips what they're supposed to be: rewards for explary service, rather than a requirement.

I can think of at least one more group they should put on that list.

Just raise prices and tell people the tip is included and end this nonsense.

The fact that this story is coming from Rupert Murdoch's New York Post makes me suspicious - they would grab onto and hype any kind of story that would play into any type of bigotry.

If his story is true, more likely than not some staff members are responsible for this and it is not 'company' policy.

And I agree with Anon #2, restaurant workers should get minimum wage.

Wiki has a good article. Some USA states allow "gratuity included" on the bill. The 1986 tax reform law stiffened tip reporting so much that most restaurants began pooling tips.

People need to STOP thinking tips are mandatory! They are a reward for good service and the amount is at the patrons discretion!!!!

At least the restaurant was trying to protect it workers.
Yea, raise the prices and "tip included" post a sign on the menu and on the front door.
Restaurants had to do this in Great Neck due to the influx of Persian Jewish doctors from North Shore LIJ hospital.
...Like the South Asians they are notoriously cheap as well. Perhaps worse, they really hate American's and the culture.

Isn't Baluchi a South Asian name? Maybe this is a question of they know their own kind.

Tips are not a "reward" they are how servers get paid. While it may be necessary to tip less or in extreme cases not tip at all because of egregious service, thinking that a standard 18% gratuity is a reward for anything above standard service is a shitty way of thinking.
If you think it is ok to regularly tip less than the standard 18%, you should make it a point not to return to that restaurant. A good rule of thumb is don't piss off people who handle your food. This also goes for people who talk down to wait staff or otherwise treat them like shit.

@Joe - how racist can you be

"...Like the South Asians they are notoriously cheap as well. Perhaps worse, they really hate American's and the culture."

As a someone of South Asian decent - I really resent that comment. Contrary to your baseless stereotype, I am proud to be an American, but am not proud of racist filth, like you. Your racism is also how the rest of the world perceives us Americans. It's terribly ridiculous the amount of ignorant stupidity that's written on the Queens Crap comment section. It takes away from some of the articles that are posted.

I agree that a lot of racism on this site is posted by hacks to scare away the typical Queensite who is frightened by their own shadow.

But if you take a look at the news coming from Asia, you see a degree of racism embedded in that part of the world that is undreamed of here.

If Hindu fights Moslem, if Persian fights Turk, and Arab fights black, then all this disappears as soon as they are in the hedonistic West.

With all respects, you, good sir, are full of Crap.

But his stereotypical comment is still racist and still offensive. And regardless of what they do in other countries, as a Queensite and an American, I am offended by this fellow American and his racist generalizing and demeaning comment.

Waiters and waitresses should be salaried as seen in some european countries. They take pride in their work. Any outstanding efforts should be rewarded with a tip. If the job is salaried, there will be better applicants vying for the position. There should not be fear in eating in a restaurant simply because you are afraid to complain about the service. Why should the owners and chefs of the restaurant be punished if the server is a lazy idiot.

Meli, no one held a gun to your head and forced you to come here. If you don't like us, you can always leave. No one is keeping you in the USA against your will. how about you show some gratitude that our open society allowed you to come and live here in peace in the first place, instead of whining, complaining and calling names. Next you will say someone on this board called you a nigger.

the article is important because it highlights the disrespect many illegal aliens have for working class and those that they see as lower class. the invading forces from third world countries are importing bad manners, disregard for workers and unethical business practices.

Meli, Joe is NOT a racist he's a SOCIOLOGIST, a perceptive commentator on contemporary Queens society - the "Max Weber of Queens Crap".

If you "loved" free speech so much why are you so offended when somebody exercise that right? I guess for you free speech only means the freedom to pander to racists such as yourself.

This country is in the throes of transferring trillions of US dollars into the hands of Communists: namely by US companies producing goods in China and US consumers buying them. If you're such a patriot why don't you do something about THAT?

Go home? What are you implying?

I was born here. I am home.

@Auntie Invasion - if you're worried about the influx of immigrants from third world countries, perhaps you should consider moving out of NYC and into a small rural town in Kansas.

You obviously don't belong in a diverse place like NYC.