NY now a city with too many condos 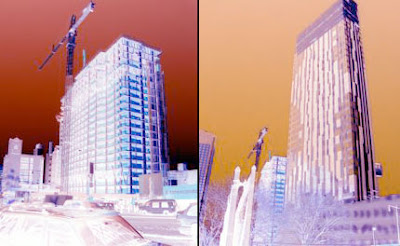 But as New York City's economy rapidly worsens, people wonder how many of these new condo apartments will languish vacant. Precise numbers are difficult to come by, but government leaders and housing industry experts agree: The condo market is in serious distress.

It is not just the vacant units that are worrisome. In many neighborhoods, half-built projects sit stalled and land cleared for development shows no signs of activity, creating a nuisance for residents who now must live indefinitely with deserted construction sites.

All of this is expected to have a dramatic impact on New York City. But how bad is it, and how might policymakers, housing advocates, developers and financial institutions respond?
Posted by Queens Crapper at 12:10 AM

In 1975 a friend of my Father had the developer call about a project that was going up on east Madison Ave in the low 80s. He was disparate to show the bank some sales and avoid foreclosure on the new high rise condo tower.
He was offering 2 BdRm @55K -less if you took two (or more).

I don't have to tell you what those are worth today. And there were plenty of similar offers around the city. Several major projects just stopped in the skeletal stage and remained dormant for 2-3 years.

New York City was in -alot- worse condition back then, but everything eventually got finished and sold.

And yet, no affordable housing anywhere. Could it be that 90% of the housing can't be built for 1% of the populations?

I was born in 1968, raised in Flushing, and spent part of my childhood in Bay Terrace, going to PS 169. Our favorite place to play was an hulking concrete shell that stood incomplete for years. The lot was rolling, muddy, hilly, and growing ghetto palms and other fast-growth trees. Being so unstructured, it was much more appealing to adventurous kids than parks. Part of the fun was being chased off by the one grumpy security or construction employee who'd chase us away. Sometimes it seemed the site was entirely unattended. Getting inside the building when the man was on duty was a boasting point, like slipping into the dragon's lare.

But of course this blight for adults wasn't always great for kids either. Once a man (or late teen?) took my glasses and told me he'd return them only if I went into the building with him. A group of Asian teens saw what was happening and one came over to demand them back. He told me to run, and so I did. I called my mother from the local bowling alley. She called the police and came down. The would-be molester, went from door to door of the bowling alley to check me and perhaps prevent my escape. I told the managers as well. He fled the scene before the cops arrived.

Of course even standard parks were magnets for crime. My brother and I were held up by knife in Kissena Park for a bicycle when we were 5 and 6. I learned to run and climb fast, and my brother biked better than he ever had! That allowed us our first ride along in a police car - caught the would-be thief the next day. He was even wearing exactly the same clothes - obviously, in retrospect, a kid who probably had little shot at decent parenting.

Still, the ingredients are there today for a toxic brew: empty lots and a reduction of police. The unthinking greed of the builders in the bubble was, the penny pinching is pound foolish: it costs so much more to reclaim a neighborhood from criminals than to keep order through a few hard years. We can't go from one kind of predator to another.

I am not opposed to towers in some districts - they are more efficient and can be humane. I do know many community-oriented people living in the LIC waterfront towers. Not enough, but perhaps in no lower proportion than in the low-rise areas I have known.

But, if you're going to build big, you have a special obligation to build beautifully and built SMART!

And they're not paying their taxes, either, thanks to the 15-year abatements.

and they're still thinking about developing willets point?

Now I hear most of the big developers are looking for concessions from the union contractors. This is so they can stuff more cash into their fat wallets. The deveopers are greedy beyond compare. IF there are no concessions - they wont build, hence no union jobs. The developers say say they will wait it out.