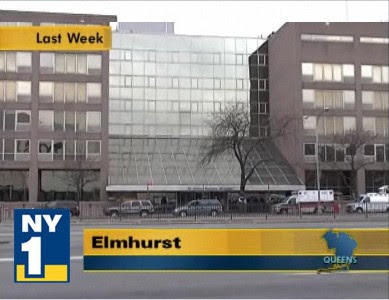 Two hospitals in Queens are set to stop accepting patients Saturday night at midnight as they prepare to close for good.

Workers are expected to hold a vigil Saturday night outside St. John's.

The hospitals are closing because their operator, Caritas Healthcare, recently filed for bankruptcy.

The move will leave about 2,500 people out of work.

The candlelight vigil will be at midnight tonight in front of St. John's.

“Despite numerous calls from the various stakeholders to prevent or delay the hospital closures, the State has failed to keep Mary Immaculate and St. John’s Queens hospitals open. Without putting a plan in place, the State has left many unanswered questions about how Queens residents will be able to get their health care needs met. The New York City Fire Department, which oversees Emergency Medical Services, also has not addressed how the closures will impact the health and safety of area residents including transition plans for ‘911’ emergency medical response and treatment services.”

Over the past several months, Thompson has been advocating to prevent or delay the hospital closures. Additionally, in 2006, Thompson issued a report “Emergency Room Care: Will It Be There?,” detailing how the proposed closure of five hospitals could overwhelm emergency rooms at neighboring hospitals, reduce ambulance availability, and require New Yorkers to travel farther to reach an emergency room. With the closures of Mary Immaculate and St. John’s hospitals, Western and Southwestern Queens have lost three hospitals within two years. 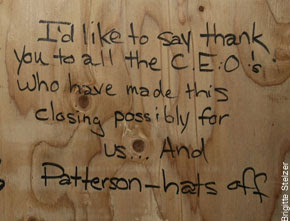 "Someone needs to investigate why this is happening," Beidell said. "We have always been packed with patients who have insurance. How is it we were unable to stay viable? Its all politics and its very shady."

Staff were shocked the closure actually happened, adding that less than a month ago the hospital was at capacity.

EMT Brigitte Smalley said patients have to wait too long for beds under normal circumstances, and was grim about what could happen with two less hospitals in the borough.

"There are no beds. These closings are going to shorten life spans," she said.

"Governor Patterson is going to try to save money by killing the residents of Queens," he said.
Posted by Queens Crapper at 4:53 PM

and lets spend 500 million for willets point makes alot of sence. i guess those 2500 workers could jump on the willets point bus and get retrained too hah?

lol. two hospitals that took so many charity cases now out of money. wonder why???????????

Next time you see Shulman, Marshall, et al, be sure t ask:

Will your Willets Point plan set aside land for a new hospital?

Most of these employees should quit complaining they have become casualties of their own actions. As long as they were getting a pay check they did'nt give a dam They thought the union would protect them until retirement. Many will not be able to find another job because after all "they may have to do some work"

Pleaseeeeee you are the same staff
who would walk off the job when your union organizer tell you to, and disrupt the entire work flow of the hospital. How many of you stood up and said "NO" this is not right. Ha! Ha!. No matter what you did you always got a pay check. Most of you are a part of the problem not the solution That's why the hospitals have to close. There is no more gravy just the TRAIN. Seeing you are all so great you should'nt have any problem finding another job, After all Employers are always looking for good help.

For the people who complain because hospital orderlies and other poorly-paid people actually have to receive enough money to pay landlords for the hovel where they live:

When the hospital is shut down, be sure to have Bloomberg and Patterson find someone to take our your appendix. The free market can raise you from the dead also.

As someone who has slept on a gurney in a hall for more than a day while waiting for major surgery (the Catholic Church gave me last rites that time, but fortunately I'm still here.) I can only shudder at what is coming next.

America has become an embarrassment as everyone has embraced this "me first" begger-thy-neighbor mentality. Even Cuba seems to be able to provide medical care, but we cannot.

Amen
The employees are in part to blame. They let 1199 run them around by the nose. They thought they were the great saviour. They were not. They bleed the hospital dry and never ever worked with management. You are as much to blame for letting them do it. I love now how they have tv spots fighting the cause. That's only because they will be losing lots of your union fees. And how will it look to know that they don't have another hospital to control. You all thought that they were going to save you in the end. Well they didn't. It will be interesting to see what happens to some of your union delegates. What will there big mouths get them. Starting out at them bottom of a new job is going to be a bitch. Just think. Working Christmas, no summer vacations, floating all over your new hospital, doing mandatory overtime.
It will be fun to watch that after 20 something years of service that you are now going to be the bottom feeders. That's if you get a job

Saint John's had the chance to be saved and it was all about greed. Someone should be looking into the books at these hospitals and who's running them. I see, in this man's future jail time. If a hospital has patients and insurance apparently, someone didn't do their job correctly. Stop blaming the state for this and the people who had raised the money to save them. I know I paid my $35.00 co-pay bill.

Where is the community?

This is what happens when you have poor illegal transients in the area.

Where is Bloomberg, Marshall & Patterson to help with keeping open these 2 hospitals?

We are the fastest growing buough so where are we going for emergency care? No-where because if you experience a stoke or heart attack you will need to go well out of the way in an ambulance - you'll die going much further away.

As a previous employee,I was very sad to see St. John's close last evening. I do agree with some of the posts regarding the union. It will be interesting to see what happens. I never expected very much of them during my time at the hospital. In fact, in 6.5 years of working there, I only met one union delegate (???). Funny how the ads didn't show up on TV until the week before closure, I see where my dues went.

As for finding another job...obtained one at a non-union facility and couldn't be happier.

St Johns employees had no illusions about the union & the fact that they very often defended the indefensible. That doesn't change the fact that the great majority of employees were hard working people dedicated to the hospital and the community.

For most of us, this wasn't just where we WORKED, it was our family and it is OUR community.

You can say what you want, but the fact is that closing these hospitals is extremely detrimental to the people of Queens. The other hospitals are NOT equipped to handle the overflow.... period.

Not that I am a union shill, but why are the working poor more responsible for the failure of this institution than the big shots? How has it become acceptable in America for the bigshots to corner nearly every penny in every enterprise? Why are we standing for TARP money leaking out of the bucket as fast as it is poured in via million dollar bonuses? Time for America to put on its big-boy pants. Avarice is a deadly sin, not a virtue.

I am one of those dedicated,hard-working employees who absolutely loved the hospital. Yes, I felt like we were a family and with all families there are some knuckleheads (talking about employees not administration). As for administration, well they speak for themselves and I am sure they all had a pretty nice cushion when they left. The sad part is that the surrounding hospitals will be unable to meet the requirements placed on them now that we are closed. If you didn't think you had a long enough wait in an ER before, see what happens now. I guess the department of health does not care about the increase in death rate that will result from these closures.

To those of you reading these blogs who are former employees of St. John's, my best wishes in your future endeavors. Take comfort in the knowledge that your extended family members will miss you and hopefully your new families will grow to love and appreciate you as much as I did. Yeah, that's mushy, but it needed to be said.

Closing hospitals is exactly in line with the kind of "growth" Bloomberg has in mind for this city: cancerous growth of the illegal population which will provide everyone a third-world standard of living.

It would be a huge disgrace for the city's administration to continue to tout "growth" and "development" after the closing of two hospitals.

The closing of St. John's should be a wake up call for us. Why the outpouring of bile toward the unionized employees? The Medicare/Medicaid fraud that undermined most of the recent hospital closings is not even discussed. Do you really think that the employees are to blame? Let's stop the race to the bottom . Stop blaming others for achieving decent working conditions, wages and benefits. Pretty soon, we'll all be vassals for the monied interests, paying stealth taxes so their cheap labor can receive free health care. Stop blaming other middle class workers who are now jobless. The closing of this much needed health care facility and the loss of employment for so many fellow citizens is a serious situation that needs to be addressed by our elected officials.

You can say what you want, but the fact is that closing these hospitals is extremely detrimental to the people of Queens.

THE PEOPLE OF ELMHURST DON'T CARE. NO ONE SHOWED UP. GO AHEAD, WALK AROUND THE COMMUNITY. MOST DON'T EVEN EVEN KNOW WHAT IS GOING ON.

FOR MOST OF THEM, IF YOU TELL THEM WHAT IS GOING ON, THEY WILL SHRUG OR GIGGLE.

The other hospitals are NOT equipped to handle the overflow.... period.

BY WHOSE STANDARDS? MOST OF THE IMMIGRANTS COME FROM COUNTRIES WHERE THE HEALTH CARE IS IN THE TOILET. AS FAR AS THEY ARE CONCERNED, YOU COULD CLOSE SIX ST JOHNS AT IT WOULD STILL BE BETTER THAN THEIR COOOONTY.

ADD TO THIS SENIORS WHO VACANTLY VOTE FOR THAT 'NICE MAN' THAT SHOWS UP ONCE A YEAR, AND THERE IS NOTHING YOU CAN DO.

WHERE IS THE QUEENS DELEGATION?

BTW, YESTERDAY THERE WAS A LISTING OF NEW SCHOOLS GOING UP. THE BRONX AND MANHATTAN EACH GETTING MORE THAN 10