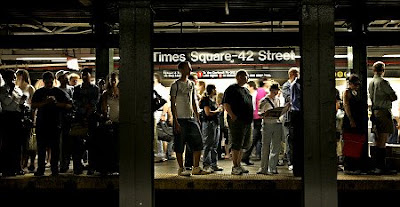 The MTA will cut weekend subway service even if it gets a state bailout, officials said Monday.

And, for the first time in six years, the number of weekday riders dropped 2% in January, suggesting job losses have begun to thin the throngs of straphangers riding the rails.

If the pattern continues through December, the MTA faces a $651 million budget gap - even if whopping fare hikes and other severe measures go into effect later this year.
Posted by Queens Crapper at 12:50 AM

Typical bureaucratic thug talk. Why is it that when merchants (food, service, clothing ...) want to increase sales and profits, the best way is to have a sale?

But, when any government agency wants more money, it raises prices and cuts service.

Now, when bureaucrats like Commissar Death and Taxes claim that there is a financial crisis, and people are losing jobs, and small business is closing, we should all "sacrifice" to restore prosperity.

But, the MTA wants to worsen the crisis by limiting travel to only folks who pay more for less. MTA management, in its limited capacity to think imaginatively, simply cannot (WILL NOT) lower prices to increase ridership. Let Burger King take this agency over. On its break times alone, they would make Mass Transit fantastic.

With lowered ridership, fewer people will use mass transit to move around to shop, see movies, visit, in short, to spend.

Also never forget that the "Titan of Commerce" wants to enact his travel ban via the "Congestion Tax", and in-city bridge tolls, claiming that drivers must switch to MTA's Mass Transit system.

Never forget this. Dump these morons.

Here goes Taxpayer wanting handouts again. The fact is that the subway fare is low compared to other cities and compared to historical fares (inflation adjusted).

It is not that the city has to cut back that enrages--but where. Cut schools, hospitals, basic transportation, but fund private endeavors such as sports stadiums, take private property through eminent domain, replace natural grass with expensive, toxic turfs that add to flooding in surrounding areas...

The last comment was silly. The city didn't fund the stadiums. It committed funding to improve infrastructure to facilitate far greater sums of money to be spent by the private organizations to build the stadiums, which creates jobs and benefits the overall economy.
Also, the artificial surfaces, if done correctly, saves a great deal of money in maintenance and is much more appealing for high use areas that wear down to dirt during the summer months.

Nothing wrong with the old stadiums, they only created temp construction jobs and no new permanent jobs. Glad we put millions into rebuilding parks and infrastructure for them.

Artificial turf may be cancer causing and has been known to induce heat stroke due to its ridiculously high temps. This increases the heat island effect and leads to death of vegetation, which leads to more CO2 production. It also spreads staph infections. It's a bad investment. People have been playing on dirt since the dawn of time.

City planning put brakes on development until infrastructure catches up: ?

City cracks down on illegal conversions and tweeder programs for 'guest workers': ?

Can someone help me?

Why is the voters and tax payers getting screwed, but the clubhouse sails by untroubled as they damage the city?

Anonymous said:
"Here goes Taxpayer wanting handouts again. The fact is that the subway fare is low compared to other cities and compared to historical fares (inflation adjusted).

I would never boast of being a bigger taxpayer. That says that you don't look to protect your own interests when lousy government fails to deliver but demand ever more.

Do you also boast that you pay more for a car, or for a plumber, or for groceries? If you like to pay more than necessary, what does that reveal about you and common sense?

Drivers already pay through the nose for using roads and bridges. Gas taxes go to maintain those.

As for the other Anonymous' comment that "Merchants don't have sales to increase profit margins. They have sales to move old inventory.", are you saying that Burger King sells old burgers? Or, that supermarkets sell old food?

Now you must be a truly educated consumer.

Lead-footed, thick headed government employees simply lack the imagination or the knowledge to imitate this useful tactic. One other reason for failure is that government agencies are always happy to COMPEL taxpayers to keep supporting failure.

In the private sector, we cheerfully say good-bye to the failures.

The "Clubhouse" is depending on the new tweed people to keep them in power forever. Ego maniacs are like drug addicts, they can’t quit and step down and insure they are going to get the "next fix" before the one in front of them.

Remember Mario Cuomo? That arrogant A**hole built a lifelong career F_ing the people that paid his salary as governor for 15 years.

Funny it would be an Illegal from Trinadad named Colon Furgerson (the LIRR Shooter) that would take Coumo down.
Coumo still refusing the death penalty after that animal and his circus trial

Gets even WORSE Obama is doing the same thing!!

Turns out Obamas plan gives ILLEGALs money to avoid foreclosure!
It turns out that banks **conducted buissness** with about 5 million illegal aliens given them mortgages.

Only $275 million is set aside to help "homeowners" avoid foreclosure.
(The term legel homowners and US Citizens have been removed)

That $275 million is already down the turlit !!

When the "sub-prime mortgage crisis" began, it turned out that banks had given mortgages to about 5 million illegal aliens and it was primarily those mortgages that defaulted, causing the ENTIRE financial catastrophe we have.

Now, the very people who caused the financial meltdown, are poised to get free money from the government!!!!

SEE WHAT HAPPENS WHEN YOU READ WHAT PASSES FOR NEWS THESEDAYS?

MCDONALDS OF THE SYNAPSE.

11 states have already declared sovereignty against the US government (10th Amendment) due to the stimulus package. NY would be wise to do the same. There are MANY strings attached if the states accept this money. This means less freedom for us, and more government intervention on all levels of life. Kiss the freedom we have now goodbye! Computerized medical records, not being able to be opted out of whatever the government wants you to do.

if there going to cut weekend service, they should at least take appropriate measures to keep the economy stimulated, such as offering half fare rides on weekends to keep people on the buses and trains.

It is a really bad idea, but even worse is the talk about bringing back the sales tax on clothes--when all the stores are empty!

Perhaps the local Queens merchants can hold a "Manhattan Drop Dead" sale and encourage locals to buy from them instead and save the train fare.