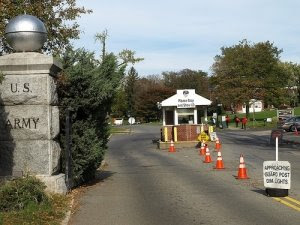 Gate security at Fort Totten will be discontinued on Sunday, March 1, 2009. Fire Commissioner Scoppetta is taking this action in response to the Mayor’s recently announced budget cuts. Termination of the security contract will threaten Fort Totten and the surrounding community.

Both FDNY and NYPD house units on Fort Totten which have high security needs. To go into detail would be irresponsible but suffice it to say that these units deal with matters pertaining to terrorism and criminal investigation.

Without security there will be burglary and vandalism concerns at night. In addition, the abandoned old buildings, many of which are part of the Historic Monument Trust, would be prime targets for arson once it gets dark. Night time criminal activity in the Fort will spill over into Bay Terrace.

According to Bay Terrace Cafe's update, the FDNY rethought this idea and found it to be incredibly stupid and so light duty firemen will be picking up the slack.
Posted by Queens Crapper at 12:48 AM

I know the stuff that goes on at Fort Totten. The front gate security they have already is not enough

Maybe Ann Jawin can sit in the booth.
Her mug would scare the crap out of anyone!

All part of the plan folks.

When those buildings get "vandalized" enough, Joe Mattone or St. John's U will be back with their old "development" plans for Fort Totten again!

Why the hell do they need (was it 3 that I counted) Parks Department employees sitting on their hands doing pretty much nothing in the
museum building located at the head of the battery tunnels?

" but suffice it to say that these units deal with matters pertaining to terrorism..."

aah, there we go. Tired of answering questions? Want people to just do as they are told? Just drop that little beauty, and go on with business as usual.

They act like having NYPD TARU in there is some big secret?

Security there is already a joke. It has been for awhile now. I just plain don't believe that they will man that booth at all with 'light duty' firemen... wtf is a light duty fireman anyway?

So let me get this straight, they're going to replace minimum wage security cards with guys making way more than that? To save money?