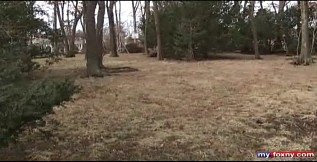 A humble burial ground on Long Island that pre-dates the Civil War is at the center of one family's efforts to keep history alive. The land is the final resting place for slaves -- and their descendants are determined that developers not disturb the land.
Posted by Queens Crapper at 12:02 AM

There is one of these slave cemeteries across the street from North Shore LIJ Hospital on Community Drive in Manhasset nobody talks about.

The old church has already been torched, now both the Hospital and a developer are after it.
A HUGE tax exempt synagogue for the Great Neck people (Imported Buk and Iranian medical staff)already sits on part of the property yet it’s plugged into Manhasset taxpayers water a sewer treatment.
It’s Not Fair and was a sneaky illegel stealthy project IMO

North Shore LIJ is F_ing up the whole Town of North Hempstead!

I know the place well Joe. One final indignity to an enslaved people. The land here is sacred ground and development on their final resting place should not be allowed. Ever

Kaman
Pollack, Gross, Wink
Shimel
So far over 4 people, building inspectors, zoning people, head of finance have been dragged out of Town Hall on Plandome road in handcuffs and these people that hired them still get re-elected

Great Neck now has a HUGE population of new Mid Eastern people that love them. You can row out on Manhasset Bay look west and you think you’re looking at the walls and tan stucco of Haifa Israel bay.
Most these new people work the North Shore LIJ hospital system.

These people have no more space in Great Neck and have every piece of Green in the in-incorporated areas of Manhasset and New Hyde Park in the crosshairs.

Manhasset is simply out numbered by these new Persian, Russian and Buk Jewish from Great Neck who see any Green space as wasted space.
They are also as nasty and hostile as they come!

I bought a place in Mattituck (Southold)
Out their -those Polish & Italian people don’t take to crap, tweeds or change.
If some Buk should go out there to start shit fighting variances, laws, etc he or she wont have a house left or may come back in a box.
Thats if they could even be sold a house or property.

No Democrat's in the Township and everybody has guns if the Mexican agriworkers pull any crap. For Christmas time I have this archery target warthog...I put antlers on it, a red bulb in the mouth and call it my reindeer. ALL the people love it !

When I did that in Manhasset OH VEY ! people called the cops, news 12 it became a circus.

I have to get out of Manhasset before all these now broke Wall streeters subdivide there properties, sell and split.

Honestly I would rather live in Jackson Heights or Corona then around Persian and Buk Jews. Id have no problem even living next door to a PR or DR compaired having all these savages near bye.

At least in Corona or JH you can sit in you gate and your neighbors hand you a beer !
Over here they spit at you, and drive the black Benz's like maniacs.

Calling a gravsight "wasted space" and torching a 150 year old church .
.....what disgusting bunch of animals!

Hey -Joe, I really love your noble defense of the Polish and Italian races in your posts; makes me feel so proud to be a New Yorker. Seriously dude, what's with the Jew hating and the Mexican bashing? It makes any legitimate argument you have worthless!

It is sad that we have to desecrate graves. These people were abused, disrespected and robbed all their lives and now their bones aren't even safe.

Since when are facts hate ?
Take a good look at the people f*cking up our country and **those who** refer to "Green space is wasted space"

Hint ...They weren’t born here!
The Buks and Persians are most distructive law ignoring scumbag groups out there !
Try living near just one of them !!

Most normal people agree with me but are to afraid to say it.
Im not, I will say it to these savages ugly faces also !!