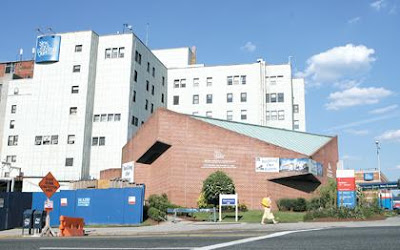 Emergency rooms around the borough are already experiencing “significant” spikes in incoming patients this week as Queens hospitals brace for the impacts of the impending closure of St. John’s Hospital Queens and Mary Immaculate Hospital.

Ole Patersen, vice president of emergency medicine and public affairs at Jamaica Hospital, said patient levels at the emergency room varied from slightly above average to between 20 percent to 30 percent above normal on different days in the last week.

Oh, and did you hear about the nurses' strike?

If it had received $36 million from the state, the parent company of St. John’s and Mary Immaculate hospitals said it would have been able to continue operations at the financially troubled facilities.

$36M is a drop in the bucket compared to the corporate welfare the City, State and Feds have provided to other companies. There's something else going on here, and hopefully Attorney General Andrew Cuomo will get to the bottom of it. Or maybe he's in on it, too. Would it really surprise anyone?
Posted by Queens Crapper at 12:37 AM

There's something else going on here, and hopefully Attorney General Andrew Cuomo will get to the bottom of it. Or maybe he's in on it, too. Would it really surprise anyone?

After watching whats gone on the past month, there is very little that could surprise me. What does surprise me is the fact that these people think St Johns employees are stupid enough to sit back & accept that our hospital closed because we ouldn't pay the bills.

We might be closing, we may have lost this one battle, but the war to see that this dirty deal gets exposed hasn't even begun to be waged.

Who are they kidding.....a 36 million dollar loan from the State would barely cover their debt. They probably could have survived another few months before asking for more money. No one seems to get it, the operaring losses from these two hospitals are tremendous. I beleive that if the hospital presented to the State a comprehensive proposal to reduce their losses and maintain quality....the State probably would have provided additional funding. These hospital cannot expect the State to provide unlimited funding and continue to do "business as usual".

I agree with you that the money given to the CURRENT administration & board would have ended up in the same mess months from now, but money given and a total overhaul of management and board of directors could have saved these institutions.

Does no one realize how much thievery went on here? This isn't just a case of a hospital with poor reimbursment rates & un insured patients, this is a case of many people getting RICH while watching St Johns & MIH sink lower and lower until there was no recovery possible.

The local politicians should have pleaded with the State to provide a trial period of funding that required the removal of the present Board and Administration...with complete oversight by the DOH,including an investigation of how the hospitals do business. This process should be transparent with full disclosure of the past fees paid to CEOs, CROs, Hospital Administators, and Department Chairs and Directors.

An earlier post today reports that Commissar Death and Taxes has $46 Million to spend to "retrain" the financial industry's "Masters of the Universe". These are his kind of people. These are the ones who destroyed the universe.

Now, we know that the Commissar will NOT allow a single penny be spent to rescue these two hospitals.

$306 BILLION to Citigroup, $46 Million for his cronies, NOTHING for the health of the citizens in Queens!

And, he wants another term?

The bottom line is that for the vast majority of people being served by these hospitals, medical care in Queens is excellent.

Perhaps, in many cases, beyond their wildest dreams.

As a matter of fact, it will be one of the reasons they will encourage their relatives to move here.

So you will not get any support and for all intents and purposes, its business as usual in running the firm we call Queens.

Some ones in some ones elses pockets on this issues as da ways i cees its!!

What happened to shutting down Queens Blvd?

Protest at 12noon Saturday. Be there.

Shut it down. None of the politicians helped. No one cares for queens lets make a statement

The two Vice Presidents (AH and CM) have a large amount of explaining to do. 250k a year, expense accounts, incompetence, coruption. How can anyone expect these places to survive. These two are laughing all the way to the bank!

I hope all these hospitals suffer and drown, they did nothing to help these hospitals. No one said a word. Well I hope you all earn your money. And don't strike, someone will want your job. And hopefully no one will die because of care in patient care!!!!!!!!!!

screw them all. hope the DOH does not close you down because of patient safety. maybe they should all put tents out in the ER bays for the overflow of patients. its like we are living in a third world country. hardworking tax paying people out of jobs. got to love it!!!!

You are blaming the hospitals that are left? They are victims in this mess. The State DOH really blew it especially in the way that they did the closing. They did not give enough time to the hospitals left to plan for the patients that they would get.