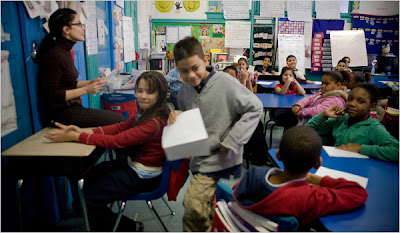 In many circles, class size is considered as fundamental to education as the three R’s, with numbers watched so carefully that even a tiny increase can provoke outrage among parents, teachers and political leaders. Alarms went off in New York and California last week, as officials on both coasts warned that yawning budget gaps could soon mean more children in each classroom.

But while state legislatures for decades have passed laws — and provided millions of dollars — to cap the size of classes, some academic researchers and education leaders say that small reductions in the number of students in a room often have little effect on their performance.

At recent legislative hearings on whether to renew mayoral control of the New York City schools, lawmakers and parents alike have asked, again and again, why Mayor Michael R. Bloomberg and Chancellor Joel I. Klein have not done more to reduce class size. On Tuesday, the Education Department issued a report that found the average number of children per class increased in nearly every grade this school year.

Want smaller classes? Stop overdevelopment and stop illegal immigration. Not willing to lean on legislators to do that? Then start saving to send junior to private school or move somewhere else.
Posted by Queens Crapper at 12:52 AM

When I was in NYC public school in the 70's and 80's there were routinely 40+ in my class, and only one adult (the teacher) in the class room. We survived and learned. Deal with it.

Yeah seriously. When you asked a little while ago about becoming a city of wusses, this is a prime example of it. Whine, whine, whine...my kids a dumbass so I'll blame the size of his class for why he doesn't learn anything.

You'd think parents would be smart enough to realize when they are being manipulated by the UFT, but alas, their gelatinous minds were molded by these same culprits a generation ago.

Class size despite what you think it is capped at in any school, public or parocial are large in this city.
Unless you go to an elite tiny private school in Manhattan - Trintiy, Brealey etc @ 40k annually if you pass muster after flashing all that cash your out of luck.

The artical indicates illegal immigrant's children are only adding to the numbers in classrooms is correct and how it affects your childs education. In effect your child has much less attention and teaching because of the illegal populations that are sending their children to school. In fact money is devoted to teaching these kids English to get them up to speed. Good luck if your child needs resources for learning - they have been spent on English learning.

"When I was in NYC public school in the 70's and 80's there were routinely 40+ in my class, and only one adult (the teacher) in the class room. We survived and learned. Deal with it."

I have a few questions for you:

1) Were half of the kids in your class unable to speak English?

2) Were any of your classmates born on drugs?

3) Did any of your classmates' parents come to school to beat up the teacher or principal?

4) Did most of your classmates come from single-parent homes?

5) Did your classmates' parents have complete disregard for homework assigments and school in general?

I could go on. Get the drift?

THIS is what educators have to deal with on top of all the abuse handed down from Joel Klein and the principals under him.

40 kids in a class is way too much with what you have to deal with.

I went to Bronx Science during the 70's and the fiscal cuts were brutal. We had kids sitting on the floor without chairs, on the window sills, everywhere.

I had a history text that was printed in the 1930's, most of the "history" occurred after the book was written.

I hope we never go back to those days.

The city pays lip service to immigrants invoking the good old days of the Lower East Side that produced a good deal of the scientic, culutural, political, and entertainment leadership in mid-20th century America.

The reality is, outside of tweeding

(they move in, the middle class complainers move out,

they have needs the clubhouse can provide, not impossible quality of life issues that make the pols look bad,

they vote Democratic clubhouse, not question ethics or have expecations on civic perfomance)

the immigrants are treated like shit, forced to live in substandard housing,

substandard city services (in every neighborhood that is immigrant services suck)

and now their kids future is stunted by substandard education.

But someone needs to drive cabs, watch babies, change bedpans. We dont need them to compete with OUR kids for jobs.

and they say crappie is antiimmigrant

Whether it's a fact or not, we can't afford it. Deal with it.

Those ignorant dummies will be providing your health care, driving your bus, taking your phone calls, filling your orders. We will reap exactly what we sew and in the same proportion.

Short-sightedness and a begger-thy-neighbor mentality is exactly what cooked America's goose.

Good teachers can handle big classes. Unfortunately there's only about three of them in the system.

Yes, we had 50 to a class in my Catholic school, but punks could be thrown out, nuns could discipline, including corporal punishment and parents were supportive.

Even then, the education in math, science,history, foreign language, art and music was inferior, although the good nuns did teach us to read, write, speak and act correctly.

Combine overcrowding with ancient textbooks, no labs or resources and you have a recipe for trouble. When the kids are functionally illiterate and on welfare we'll really see how much money we save.

Do you really want smaller class sizes? Want the kids to have an actual education? To get to and from school without being shot, knifed, or have drugs and hookers foisted on them?

Do you also feel some compassion for these illegal aliens and their progeny, unable to speak English and lean anything from the school experience?

Both problems can be easily solved: Send the aliens back to their homes where their residency is legal because they are citizens.

Poof! They will no longer be aliens once they cross the border to their home country. Their kids will attend class with same-language speaking classmates, teachers and material.

Poof! Again. The kids of citizens will no longer have to fight to learn the alphabet, reading, etc.

And, Poof, class sizes will shrink.

Oh, oh! UFT won't like this at all. The effectiveness of each school would then be more easily judged without the excuse of the violence, language, attendance, etc., caused by illegal aliens.

If the UFT wanted smaller, nonviolent, classes where students learned, then they would use their clout to empty these buildings of the aliens who are there to be babysat and fed. And, of course, to be counted for the purpose of obtaining federal funds. Funds to be used for pay raises.

The UFT is not the "powerful" teacher's union it used to be thanks to sell-out Randi Weingarten. She has effectively destroyed the UFT. Teachers are now being systematically abused by their principals and assistant principals on a daily basis. Klein has ordered school administrators to dole out U ratings in an indiscriminate manner. They are ordered to write teachers up for the most minor things. They even make stuff up all to keep everyone on edge. School buildings have now turned into a revolving door for eduactors. You do not want new teachers coming and going on a yearly basis. It weakens a school. Veteran teachers are treated as though they are the enemy and forced(through relentless harassment) into retirement. I could go on.

No, the UFT has no power. Trust me. Those days are over. Blame Bloomie for wanting the illegals.

Imagine that we are reading this story and the one about hospitals closing in the same blog where the mayor has money to take private property, provide re-training for millionaire bankers, cover a natural wetland with plastic turf...

If we had a voucher program, then all those Catholic schools wouldn't have closed the past two years and there wouldn't be overcrowding in the classroom. Oh, but that's not an argument we should have.

Daniel, believe it or not the Department of Education does provide substantial help to Catholic Schools including special programs where Catholic and other private school teachers can take graduate level courses without paying. Public School teachers have to pay for their master's degrees.

Like it or not, we Catholics will just have to dig into our pockets and pay through the collection plates the way our parents did during the Great depression and World War II.