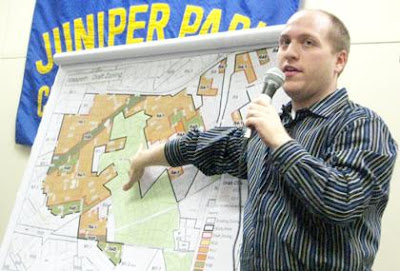 Paul Graziano, a land use consultant hired by the civic, said the proposal unveiled by the Department of City Planning, largely resembles the one he drew up and sent to the agency, but he was concerned that roughly 40 blocks of the study would remain unchanged.

That area, an R−4 zone dominated by row houses, was not part of the agency’s plan because development has been stagnant there and it could not find an appropriate contextual zone, according to DCP liaison Tom Smith.

But Graziano said he feared that with other parts of the neighborhood rezoned, developers would hone in on the unchanged area and start building. He proposed a one− and two−family front−loading row−house district for the area.

Smith said areas in Brooklyn are content with the R−4 zone. Graziano shot back, “But this is Queens. I love Brooklyn, but this has to do with Middle Village and Maspeth.”

Juniper Park Civic Association President Bob Holden agreed and said he has issues with part of the zoning plan that allows so−called infill.

He said infill lets builders construct three−family homes and are required to have only one parking space for the house.

Holden said the civic originally told the DCP that if infill were eliminated, it would not have had to request a rezoning.

“We’re going to take this for now because it protects a lot of the areas,” she said.

Crowley noted that a six−week environmental review process of the rezoning is underway and she believed it would become law by early May at the latest.

But Smith gave a target date of late summer or early fall.

Why does Liz think this is a-ok when no one else seems to agree?
Posted by Queens Crapper at 12:06 AM

Thats it, downzone your back yard and push it into someone elses backyard.

No wonder the community of preservationists are so messed up.

Paul has a haircut.

I saw in the article that Holden made a ludicrous comment that the area doesn't need another school built. First he complains about school overcrowding and now he complains that we don't need a school. Wow.

School overcrowding is happening because kids are being bused in from other neighborhoods. Maspeth doesn't need a high school. Corona, Jackson Heights, Elmhurst (where illegal aliens and overdevelopment are both rampant) are the neighborhoods that do. Build it there.

It's about time this moved forward. It's been 5 years.

"I saw in the article that Holden made a ludicrous comment that the area doesn't need another school built."

If you have been following the battle, he suggested other locations that would be more suitable within the district, but the SCA is adamant about the 74th Street location which is in close proximity to 2 other schools. There is such a thing as oversaturation of schools, too.

"School overcrowding is happening because kids are being bused in from other neighborhoods."

Words of wisdom and experience. The proposed high school would add a ridiculous amount of time for Maspethians to get to the subway on QB (even worse if the JPCA shuts it down).

Finally, a modicum of progress.

Holden's quote didn't say to use a different location, it said that the area doesn't need a high school. He also hasn't given good reasons why those other locations are better than this one.
So Middle Village high schoolers have to trek to Grover Cleveland or Newtown because Holden doesn't want a school in Maspeth. Terrible.

What's the big deal? They're still a town away no matter where they go to school. I notice no one seems to be clamoring for a public high school in Middle Village. I wonder why that is.

what's this BS about middle villagers having to choose between newtown and grover cleveland? they have over 500 choices of high schools through nyc.

does anyone know where i can get afro sheen?

maybe we should go visit Crowley's office to discuss this matter in greater detail. Too bad she doesn't have an office open yet. Must be a tough job to try to get an office open after knowing you needed to do so since November 5th, 2008. It is now Feb. 21, 2009. I wonder if she can even count how many days that is. I think she has been too busy dealing with her DOB Stop Work Order. What are we paying her and her staff for? We can't even call them!!!

And so it begins... this blog was against Crowley before they were for her, and now they're against her again. We all knew that marriage wasn't going to last too long, but this swerve might have set a land-speed record. So who will Crap support when Crowley's up for election this November? Como? Gallagher?

The horses are all gone. Quick, close the barn doors!

This blog has never endorsed a candidate other than Frank Padavan. We are more than happy to point out when someone acts like an ass, however.

Pinky Gallagher and his fellow asswipes are in the building.

QC Said:
"This blog has never endorsed a candidate other than Frank Padavan. We are more than happy to point out when someone acts like an ass, however."

Plus, why is anyone obligated to stay with ANY office holder or candidate?

The beauty of our democracy is that we take vows of fidelity, spouse to spouse, but expect a one-way vow of fidelity from elected officials (actually, ALL on the public teat).

When a teat sucker strays, we have no obligation to act like moron Hillary and "stand by our man (or woman)" And, even she didn't. She had a deal with the devil. She wanted to get what she believed she was naturally entitled to, the presidency

For us whose nipples are regularly bitten, we must keep reminding the sucklings that we are in charge.

Or, do you believe that we must have faith in straying politicians?

Did not misread the article.

Unless you do something about the million people that the machine wants to bring here, spot downzoning means you remove more and more communities from the mix, and in doing so, concentrating more and more development on the backs of fewer and fewer people.

Who are these people? Working class, poorer, immigrant.

Spot downzoning, like landmark designation, is not based on merit, but pull. Someone someday is going to overturn all these bandaids.

All that will result is that a certain party will make lots of money.

Either rezone the entire city so that the development burden is shared equally, or stop making this a sancutary city with a new million people that the infrastructure cannot sustain.

Spot downzoning is a joke.

What are this guys qualifications, and how much civic cash was spent on him. Does he have any professional credits?

What guy? If you are referring to Tom Smith, he works for City Planning. If you are talking about Paul Graziano, he is a renowned zoning expert advising the civic at no charge.

"Spot downzoning is a joke."

I am glad the civic is protesting the high school since our kids will only be able to go to it if they want to practice whatever trade it is specialized for.

I am glad Anthony Como is against the school too.

If you are talking about Paul Graziano, he is a renowned zoning expert advising the civic at no charge.


Wasnt he the guy that went into old astoria and told the locals he had 20 years experience? at the age of 30.

what did he count - tinker toys.

you get the 'expert' advice you pay for. and that boy goes to paris often (no not paris texas)

and that boy goes to paris often (no not paris texas)

Sounds like that last guy is jealous
as well as lazy.

You can travel to Paris too bub...if you put in as much time working hard as you do mouthing off.

I'm curious. What are Graziano qualifications. Does he have a degree in planning or is this a hobby.

He has a Masters degree in urban planning.

A master's? Is that from Pratt by any chance?