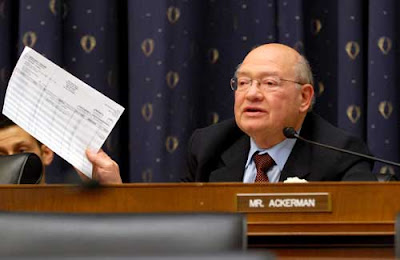 Ackerman has become the go-to congressman for network and cable news shows looking for someone who can be angry and funny about high-flying executives and inept regulators as the economy collapses.

Over the years, Ackerman has cultivated a flamboyant image, with the fresh carnation in his lapel and a quirky, but often direct, sense of humor.

He asked for a urine sample from an official who argued at a hearing in favor of worker drug testing. He also held up red- white-and-blue socks in a debate on a flag-protection amendment.

"It's just me," he said. "Sometimes, I say the funniest things when no one is around. I think something funny, and I start laughing."

Wow, Gary the funny man! Newspaper stories about Queens pols are usually about what great people they are and not about their accomplishments or legislation they've authored.
Posted by Queens Crapper at 12:16 AM

Gary is Gary. He has a solid record of delivering for his constituents, both before his Congressional tenure, in the NY State Senate, and as a NYC public school teacher. He is not so much Nyuk-Nyuk like Curly in the 3 Stooges as he is 'Grandpa Mensch' to tens of thousands of people who have come to know him & his unique style among his 535 Congressional peers.

Who are they, Asian illegal aliens? Can anyone name a major legislation that this man has sponsored?

Does his district look better today then when he was elected?

He is not so much Nyuk-Nyuk like Curly in the 3 Stooges as he is 'Grandpa Mensch' to tens of thousands of people who have come to know him & his unique style among his 535 Congressional peers.


SURE, HOW MANY PEOPLE IN CONGRESS RUN A NEWSPAPER WITH HALF NAKED THIRD WORLD TYPES ON THE FRONT COVER AND ADS FOR ASIAN AND HISPANIC MASSAGE PARLORS?

THIS GUY IS A JOKE AND IN A REAL ELECTION WITH A TWO PARTY CONTEST WOULD FALL ON HIS FAT ASS.

Good buddy of Sri Chinmoy, the sleazy con artist guru who took over the Normal Road and 165th street area in Jamaica, Queens. Helped the cult leader get buried in the private tennis court on land the cult stole from NYC.

Ackerman's newspapers are a lot of crap. those fluff pieces about the Sri Chinmoy Meditation Center Church, Incorporated are more than a bit suspect and full of harmful lies. they don't waste any money on fact checkers. The endless creepy articles about Chinmoy's bag boy, Ashrita(Keith) Furman is a testament to Ackerman's business relationship with Ashrita's father a real estate lawyer.

How many illegal apartments are in his district? How many slumlords have he taken donations from over the years?

Ackerman's district resembles a third world country. In the past twenty years I've watched as the neighborhood has eroded and been turned into a slum thanks to Ackerman. He has a paycheck unlike many of the citizens in his district.

Time for a new congress person.

Since he's such a comedian, maybe Gary was only joking when he voted against a resolution honoring Christmas (because it would be "too divisive"), yet voted for resolutions honoring Ramadan and Diwali. He's been in office too long, and it's time for new blood.

If you truly believe in all the innuendo, allegations, and mud-slinging which you have cast upon Gary Ackerman, why not go public and declare YOUR candidacy for the same Congressional seat he now occupies?

I am sure that in addition to all the vitriole you exhibited today, you are the owner of a whole slew of proven solutions to the various scenarios you claim exist in this particular CD.

Which step are you going to take?

Anon 1- and try to find out exactly WHY in 1981, the Queens College Student Union GAVE the College the land that the houses they USED to own, and then the college sold some of the land, and turned the rest into parking lots - follow the money trail - Oh, I forgot - in 1981, the paperwork was conviently lost...

"What are you going to do about it?"

Can anyone name a major legislation that this man has sponsored?

Missing Foundation said...
Step Three: Go ahead and run against him.

At the least, you won't feel as bitter about things if your candidate loses. You tried. That's the way I've always looked at things.

Now...what are you going to do about it?

Anonymous said...
Can anyone name a major legislation that this man has sponsored?

We don't have any Republican congressmen in Queens. Hello....

Anonymous said...
We don't have any Republican congressmen in Queens. Hello....

I am very disappointed in my representative Congressman Gary Ackerman (along with Congressman Jerold Nadler from New York) to hand over $475,000 of our taxpayer's money to "improve and expand" the Italian American Museum in Little Italy whose board is known to run the museum like a private corporation. Every taxpayer in New York State should protest to their elected official's in Congress and the U.S. Senate against this wasteful use of tax payer's money.

They elitist at the museum do as they please without any Federal, State or Local Regulation's even though they collect money from corporate sponsor's (tax-write-off's that would other-wise be used for public use) or public taxpayer money. This a non-profit public money sucking coffee clutch pat-on-the-back organization who discriminate against those Italian American artist who have no connection's, or are rich enough., or a part of their inner-circle.

The money would be better spent on security to protect Fort Totten in Queen's New York.

President Barack Obama should not allow any public money to go to this museum, especially during these tough economic crisis.

Ha ha ha! Thanks for posting that, Rochdalian. It seems like Gary is more concerned with Middle East affairs than domestic affairs - oh wait, duties on lamps and such are very important! How about all those bills where he couldn't find any cosponsors?

It's time for "change" in NY's 5th District!

Despite unprecedented cuts in both the number and size of specific projects in funding bills, I am proud to report success in securing our community’s fair share of federal support. The Omnibus Appropriations bill, which passed the House of Representatives on Wednesday, still has to make its way through the Senate and be signed into law by President Obama. But when that happens, our community will benefit quickly and directly. Listed below are projects that I believe represent the diversity and shared values of our community: investing in a green economy, expanding educational opportunities for underprivileged youth, assisting immigrants in learning English, fostering environmental awareness, and securing our community’s rich cultural legacy.

The projects for which I have secured funding in the House-passed bill include:

With new rules in place to ensure that federal funds are used for their intended purpose, I am delighted to have been able to return to our community a significant portion of the funds that have been sent to Washington.

Thanks for posting this. Looks like a lot of money toward tweeder programs.