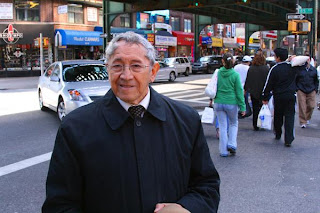 Roosevelt Avenue has a problem with prostitution, say local officials who last year announced a campaign against promoting sex for sale. Moreno, now in his 70s, said he went undercover as a "John" as recently as last year. It's a personal battle - police officials say he has no official role in their vice operations.

Instead, Moreno said, he brings cops first-hand information about brothels.

“My friends on the Community Board ask, 'Ralph, are you crazy?' No, I'm doing good work for the community," he said.
Posted by Queens Crapper at 12:39 AM

He had better watch himself. The cops themselves are probably "on the pad." He could be criminally charged or murdered by a pimp. He should find safer things to do with his old age.

Geez - this is as crazy as it gets. Good luck with that mister. I hope you live to tell your tales.

I want that job! lol

He is from Colombia so its ok.

If he was an native born he would be slurred as an Archie, and become a figure of contempt worthy of ignoring.

has nothing to do with where he's born. he's taking action. he'd only be sneered as an archie if he was sitting home on his xenophobic ass typing out poorly-spelled mouthbreather hate instead of taking some initiative to fix a problem he sees in his community. whether it's advisable to then be pictured in an article about it is another question. isn't the first rule of going undercover that you don't show your face?

has nothing to do with where he's born. he's taking action.

It has everything to do with it. If you are a native born Queens resident, you do not have the right to push for quality of life issues within your community particularly when the vast majority of such problems are created by immigrants and undocumented illegals.

The tweeding newspapers will rush to stick microphones in their faces as they play the role of the shifty peasant mummering they know not what has aroused your ire, for their [music, food, noise, living arraignments, clubs, insert your word here] is typical for their cooontry and perhaps the solution is to invite you to come over some evening.

Like the Bellerose icecream parlor, you are old, out of touch, and can expect at best a touch of sympathy for a doomed existance.

The bottom line: you are a loser until the immigrants show up. Shades of Grand Turino.

The problem is the Archie Bunker has disenfranchised a whole segment of society, as Sambo or StepnFetchit did, putting a shadow, a stigma over everything they say or do.

Made more interesting considering that these discrespected 'Archies' are the only real barrier to our elites (lets face it, only those in Mahattan count) from turning over nearly half our fair city to a teaming third world dorm.

Waste of time and taxpayer $$.
Most of the woman living off the 7 line are whores. We have the bursting schools and single moms to proove it.

Why is this idiot and the cops harrassing the only Latino women using condoms ?

Most of the woman living off the 7 line are whores. We have the bursting schools and single moms to proove it.>>> Listen up douchebag...not all women that live in this neighborhood...women who try to bring up their children the best way possible are , as you narrow-mindingly put, "whores". Your mother is a whore...She stupidly gave birth to you...She should of had an abortion loser...

Of course the cops are always on the pad when it comes to the prostitution game!

There were over 40 whore houses in the 109th precinct's area operating unimpeded.

That's where a few of their "finest" were indicted for offering protection to an Asian madam and availing themselves of sexual favors!

Too bad they didn't nab John Liu in
the act patronizing one of these "spas'.

Oh but it's been years that the Farrington Men's Sauna has long been closed.

Our "Wedding Banquet" boy must sorely miss it.

What has happened to the moral fabric of society?

By the look of things worn, faded and placed in an attic to remind us of what was.

Prostitutes have no place in society more like a rodent feeding off our fragile economy.

They are a vile subhuman breed and should be exterminated. Prostitution is ILLEGAL !

Bravo!!! This is a man of Dignity:) A Civilized Man, Your not alone brother there are others just like you that wish to maintain decency in their lives and their communitys:) If our elected officials and our 109th precinct were doing their JOB!!!! He wouldn't have to!!!!