SCA trying to pull a fast one 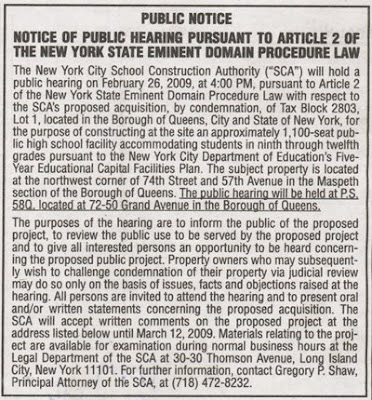 Yes, you read it right, folks. Neither Community Board 5 nor the City Council have voted on the plan for the proposed Maspeth high school yet, but the School Construction Authority is already preparing to use eminent domain to take the property.

They printed the notice of the hearing only in the NY Post (if you don't read it or didn't that day, or don't scour the legal ads you're out of luck) and the (City Record, which the average person doesn't get because it costs $500/year to subscribe to it. The hearing is at 4pm, thereby ensuring that only the pro-school staff of PS58Q will be able to make it and not the average working Joes and Janes living in the vicinity who will be most affected by the presence of this new school. This is a real mockery of what public hearings are supposed to be about, but this is what we have come to expect from the Bloomberg administration.

As per SCA, this school will not be locally zoned. It will consist of two 500-seat "career" schools (really one big school) that by nature must be open to the entire city (with preference given to borough residents -- not even district residents), and a 100-seat special ed school. Someone needs to explain why Maspeth, with no rapid transit and tremendously overcrowded bus lines should be the location of 2 schools that cater to the entire city. Someone from SCA should also explain why it's ideal to build schools in industrial zones in LIC, but not in the industrial areas of Maspeth that have empty warehouses collecting dust and owners dying to sell. And what is the City's obsession with using eminent domain for everything even when it doesn't have to?

Could it be that SCA went to Liz Crowley and made a deal with her to get her support? If Crowley votes yes, so votes the Council. Is this a done deal?
Posted by Queens Crapper at 12:49 AM

There you go making a bad argument again. Even when I agree with you, as I do here with respect to the local preference for this school, you screw it up by making a dumb attack argument with a bad comparison to something else.
What school location in LIC are you comparing to the industrial area of Maspeth? This is just silly. The population density near the school site in LIC is far, far greater than the residential population in the industrial area in Maspeth.
Focus on the merits of the locally zoning this school, and on the poor planning and notice of the hearing, and stop attacking others with bad arguments and comparisons.

How about the High School for Information Technology? That's on a truck route with low population density in the immediate vicinity.

Then there's Academy of Finance and Enterprise, High School of Applied Communication, Pan American International High School And Frank Sinatra School of the Arts, all of which are in industrial non-residential area along Thomson Avenue.

These are all career schools. This comparison is legitimate.

There is low population density in the proposed location as well. The kids all live in Corona and Elmhurst, not Maspeth.

Why is the School CONSTRUCTION Authority making the decisions regarding whether or not to locally zone any particular school?

Perhaps SCA is the acronym for School Corruption Authority, under the management of Commissar Death and Taxes.

It is the Commissar who is totally obsessed with the practice of eminent domain, without ever consulting the citizens most affected by the construction of a school (in 5 years with a student population of nearly 2000, plus teachers and staff).

This action is the Commissar's payback to the UFT, the builders, and the politicians of the communities where the school WILL NOT be placed.

Keep in mind that this same Commissar has placed the same community at risk by doing NOTHING to prevent the closing of Saint John's Hospital.

Vandalism, parking problems, neighborhood disruption (and no education), PLUS killing off those who already suffer by elimination a lifesaving hospital.

Governing is choosing. The Commissar chooses in an evil manner.

Wait! There is a way to contact Liz Crowley? I have yet to see her office open on Dry Harbor as was promised. I also heard a rumor that her "new office" has a Stop Work Order on it by the DOB. So please, if anyone knows how to contact her let everyone know. Its only Feb. 19t, 2009.

Crapper, you have to be kidding with those examples. The Thompson Avenue locations are in a stretch of office buildings and other schools, such as DeVry and LaGuardia CC. To say the IT school is in a low population density area is just wrong as well.

Why must you bring up arguments that don't help your cause and just annoy others? You really are not very good at this.

Wake up Maspeth & Middle Village. You elected Elizabeth Crowley. She is beholden to the construction unions that build the schools, not to the people that voted for her. Many Union members were FORCED and PAID by their companies to work on her campaign. A little investigation will uncover that.

Putting up a public school high school at that Maspeth location will be the beginning of the end for our once livable community. Crime and congestion will certainly increase and people will sell their homes closest to the school.

We hope we can return the favor Liz Crowley.

There are mainly 1-2 family homes in Sunnyside south of QB and north of the LIE immediately east of these schools. West of the schools is a basically just a jail and a railyard. Now on the other side of the railyard, you start to get more residential. This is no different than industrial M1 Maspeth, which, as a buffer zone, is saturated with homes. Now let's get the conversation back where it belongs. Eminent domain is not necessary to construct a citywide high school in a location where there is poor public transportation.

Eminent domain=abuse of power. that's why the city does it so much. who are we to tell bloomie "no"?

QC: "Could it be that SCA went to Liz Crowley and made a deal with her to get her support?"

No doubt about it. She made a bunch of promises to more than just the SCA. That's why she is now in a bind.

Elizabeth Crowley's motto: “Never let inexperience get in the way of ambition.”

OH WAIT, SHE DOESN'T HAVE ONE.

They printed the notice of the hearing only in the City Record, which the average person doesn't get because it costs $500/year to subscribe to it.

Actually it was in the New York Post as well...

Yes, I just found that out after reading the Forum article that came out today. Big fucking deal. They didn't notify the Community Board and the guy running the show thinks it's no big deal that it's in the middle of the day because "no one cares" about it.

Liz Crowley talk about a no show job. I want to collect a salary and not work.

E-Domain is a dirty twist including a hear at 4 in the afternoon.

Another large school built on that site would have 3 schools total in a 2 block radius. Since public transportation is by bus and the schools are off the beaten track, our neighborhood will be swamped with school buses.

This simply not fair and the school will be burden on the residents in so many ways. Another problem is the site is the demarcation of Police preciencts. When I called 911 about crimes taking place at that very corner last year, the dispatcher could not determine if the very block was Elhurst, Maspeth or Middle Village - thus no patrol car showed up. This also an area with above average car accidents in the morning and evening rush hour traffic.

"Liz Crowley talk about a no show job. I want to collect a salary and not work."

No she's working, that's the problem, we'd be better off if she would just stay home.

STAY HOME LIZ, PLEASE, THE COMMUNITY IS BETTER OFF!

Stop work order violated at her new office again. Non union labor. Whats up with this nonsense. I am a proud union member who worked in her last election bid. I will tell you I will work against her next election in 2009

Those bastards! Trying to build a school. And to use eminent domain for a public use! When will the madness stop? They should have gone door-to-door to every house in Queens to alert you about the hearing. Who reads newspapers anyway?

Why wasn't the community board notified?

There is an incredible lack of honesty as to why there is opposition to this school.

Yes! That MUST be it. Would you like to live next door to a NYC public high school or even have one on your block? The congestion, the noise, the vandalism.