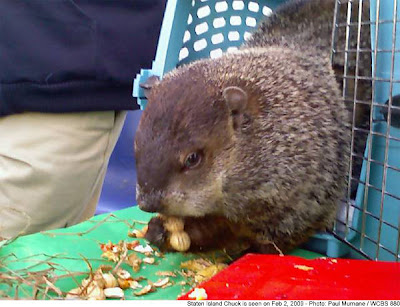 The tongue-in-cheek topic was polled by Quinnipiac University, which released the results Wednesday.

Sixty-one percent of New Yorkers - including 79 percent of Staten Islanders - felt the incident was turf-related. Fifteen percent thought it was political.

Chuck - full name Charles G. Hogg - nicked Bloomberg's finger on Feb. 2. The mayor was trying to coax Chuck into view with an ear of corn for Groundhog Day.

Quinnipiac polled 984 registered city voters from Feb. 17-22. The margin of error was plus or minus 3.1 percentage points.
Posted by Queens Crapper at 12:10 AM

I suggest we make him Crappy "Man of the Year".

I want that t-shirt!

Were any groundhogs polled?

When you give an animal food then pull it away and you keep doing that until the animal comes out eventually you're gonna get bitten. I guess it's like an election you keep slapping the voters eventually your good loose the election. Chuck was not in the wrong i watched it that morning and in my opinion The King tormented Chuck until I guess Chuck had enough.

Check it out on the video. Chuck really pissed Bloomie off. Notice how the mayor triumphantly holds the critter in the air after he wrestled him out of the cage.

chuck should of killed him no 3rd term

That's what happens when you use a wild animal for publicity purposes--sometimes they bite.

It's a wonder poor Chuck hasn't died after performing his supreme act of public service. I'll bet Chuck would be a better mayor.

Chuck was defending more than his turf.

What he saw threatening him was a jackbooted thug come to seize his property using eminent domain.

Too bad Chuck stopped at the finger. Well, the explanation here is that groundhogs don't eat shit.