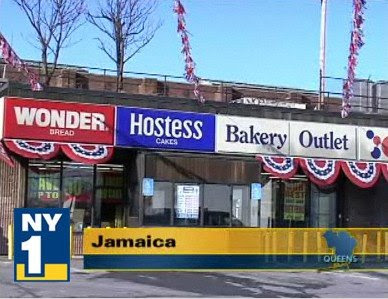 Senator Chuck Schumer brokered a deal Wednesday to keep Drakes cakes on the shelves, saving hundreds of city jobs in the process.

The International Bakeries Corporation, which makes Drakes Coffee Cakes and Hostess Cupcakes, has been in Chapter 11 bankruptcy since 2004.

Now, thanks to a deal between IBC and General Electric, the bakery can come out of bankruptcy.

Another 200 people work at other facilities around the city and Long Island.

Yay, Chuck. Now can you do the same for our hospitals?
Posted by Queens Crapper at 12:40 AM

I am happy to hear this as I know a good neighbor - father of 3 works as a driver for this Co for many years. Drakes cakes are an endearing treat for many NY ers - my mother inlaw sends boxes of the devil dogs to her son out-of-state!

We'll do anything to avoid layoffs at this time so this is somewhat good news from Sen. Chucky

is this good? yes

is this odd? yes

how many other equally deserving groups are being squeezed out?

did someone make a 'campaign donation?'

should be looked at from the federal level. you might be surprised.

Hmmm....Chucky Schmucky steps in and saves the cupcake factory from the wrecking ball.

Bloomie will play "nanny" and tell us to stop eating fatty foods.

Which guy should we believe?