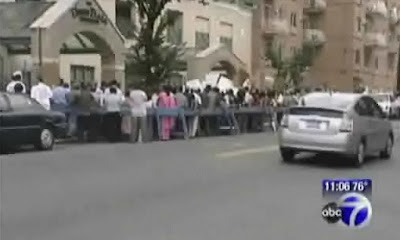 As Queens Borough President Helen Marshall today announced her support for Mayor Bloomberg's potentially illegal land grab at Willets Point, the landowners fighting to keep their family businesses issued a warning to Marshall and others who do not publicly denounce the abuse of eminent domain. "We will remember those who turn their backs on us and remind them that this fight will never be over so long as the City continues with its reckless plan to take our private land and give it to a politically connected developer," said Jerry Antonacci, WPIRA member. "Today, Helen Marshall demonstrated a callous disregard for the 2,000 men and women who work hard every day in Willets Point to provide for their families."

"This is clearly a situation where the emperor has no clothes," said Council Member Hiram Monserrate. "The land use process is designed to provide the community with the details of a proposed project. Yet, this is the second time the Mayor's Willets Point plan has been approved with the clear acknowledgment that it is absent necessary information. As their questions continue to go unanswered, the Queens community is disenfranchised from a project that will determine their future for decades to come. Unfortunately, the Queens Borough President chose to support this vague and noncommittal plan rather than question it. These questions will not be ignored in the City Council."

"This developer's boondoggle is little more than a blank check written on the backs of two thousand working breadwinners in Willets Point. Why all the secrecy about who will build it, for how much and for whom? In the midst of a City and State fiscal crisis, how can our City afford $3 billion for a deeply-flawed, pie in the sky plan?" said former Bronx Borough President Fernando Ferrer.

Despite the act of betrayal, the Willets Point Industry and Realty Association, a group of land and business owners fighting the Bloomberg Administration's attempt to steal their land, continues to grow stronger and larger. Today, SIJ Inc. and Dahlia Group joined the coalition, adding a combined 34,000 square feet to the more than 24 acres of private land represented by the group. That's more than 53 percent of the private land in Willets Point.

SIJ Inc. owner Irene Presti, who has been in Willets Point for over 25 years said, "The City has been lying to all of the landowners at Willets Point for decades. They have been collecting our taxes and promising us that they would take care of us and give us the basic services we were asking for. Now we realize they are a bunch of lying crooks and that's why we are standing together as a group to fight them."

I'm looking forward to those junkyards getting cleared out and the area getting cleaned up and developed. The vast silent majority of Queens residents also are looking forward to it. Those of you who want to keep this area a filthy dump, or are too simple-minded to understand what is needed to clean it up, are going against the grain here.

Is the Parkside Group in the house?

Monserrate owes his political future to the Dems and Parkside who support this land grab. Be careful of his support.

No one wants to see it kept a dump. The city should do what it should have done years ago and invest some $$$ in the area. If those businesses were paying their taxes, then they should have received the city's services. Shame on the City of New York!

The WPIRA should protest outside Marshall's house, to show her how it feels to lose a home!

NO ONE WANTS TO SEE WILETS POINT STAY THE WAY IT IS , HOW MUCH MORE NEGLECT CAN THEY TAKE UNTILL THEY DISAPEAR INTO THE FLUSHING BAY? IF THEY GOT WHAT THEY PAID FOR ALL THESE YEARS THIS PLACE WOULD NOT LOOK AS IT DOES, THERE WOULD BE A HOME DEPOT,COSCO ,FED-EX IN THIS AREA IT WOULD HAVE DEVELOPED ITSELF, BUT NO BIACH SHULMAN & MARSHALL HAD A BETTER PLAN AND REFUSED SERVICES SO THE PLACE WOULD BECOME UNBEARABLE AND THEN THEIR PLAN CAN BECOME REAL. NOW THATS THE CRIME " INTENTIONAL NEGLECT TO STEAL LAND FOR DEVELOPER FRIENDS" WITH THE BIG BUSINESSES DOWN THERE I BELEIVE THEY WILL FIGHT HARD AND TO THE END! AND IF EVER THERE WAS A CASE TO OVERTURN THE ABUSES OF KELO THIS IS IT!!

while I am against the whole land grab, let's not cannonize the people of that area to quickly, yes they paid some taxes but are you aware a good protion of chopped car parts were sold down there for cash, so the taxes they paid went to trying to prevent their illegal activities else where. Not all businesses there were shady but it's a fairly high percentage and the rest turned a blind eye.

most of the shady businesses down there are actually on city owned land. The city should be able to clear those lots without anyone's permission.

But they leave them that way so idiots like those at Channel 7 can shoot videos for their biased reports and show how awful the area looks and how 'blighted' it is. The city needs this angle to steal property from the legitmate buisnesses down there who have kept their properties nice - even landscaped - despite not getting any basic services for the taxes they pay. How nice of the media idiots to help them along.

This WP thing is such an ego driven endeavor by Claire Schulman, who has nothing to show for her tenure as borough president. She is the equivalent of the Roman dictators who had to have a statue, or a bridge or anything that would perpetuate them and/or their memory. And now, His Honor The Tiny One has joined her. His legacy will be the cumulative defeats he has suffered. I guess billions don't buy admirers (or height, for that matter)

Amazing that these politicians can spearhead a 'takeover' of private land and businesses and do it under the guise of 'improvement'. Kelo was wrong and all in America knows it. Yet they (the City and EDC) are hell bent to STEAL peoples land and our legacies. You saps out there that want to enjoy a 'dumb' ballgame, while getting 'screwed' by Wilpon deserve a Mayor like this. But MOST of the saps that come to Shea are from LI, so they could care less...

Proof, once again, that Helen is just a "House N" for Bloomberg and his NYC real estate industry buddies!