NYPD issues parade permit to Sons of the Revolution 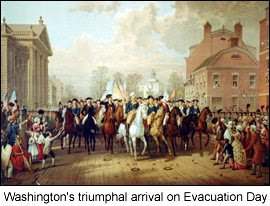 The Evacuation Day parade is on. The Sons of the Revolution, New York's group of descendants of Revolutionary War veterans, will be able to hold its historic parade this fall in Lower Manhattan celebrating the 225th anniversary of the last British forces to leave the city, a police spokesman said.

The New York City Police Department's commissioner, Raymond Kelly, ordered another review of the group's application for a parade permit yesterday after learning that it had been rejected in May. The police department holds authority over parades in the city.

Thank you Crappy! We think you had a hand in this.

You are a descendant, if only in spirit, of the dream they had.

"We are delighted, gratified, and honored that the police department is allowing us to hold this special parade, something we do just once every 25 years," ...

What a craven, ignorant statement from a representative of descendants of the brave people whose victory led to the Constitution.

The police department has no say in "allowing" anyone to exercise their First Amendment right to free, peaceable assembly.

In any event, now eat shit, Commissar Death and Taxes. Chalk this up as just another failure in your effort to throttle the Constitution in this city.

Good work keep up the pressure they all have glass jaws

Do you have any more information about NYC Battle Week in August ?

When practicing first amendment rights of free speech, and assembly,watch out for militant police officers knocking people to the ground, and then making false police reports.It happens a lot in this money based capitalist city.