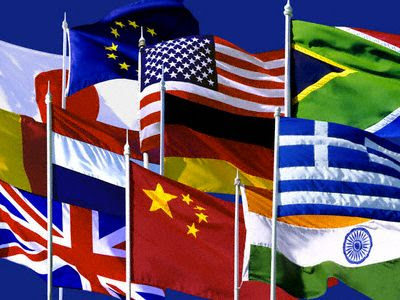 NYC services to be accessible in 6 languages

The executive order is the first uniform, citywide policy requiring agencies to provide assistance and translation in the languages most commonly spoken by New Yorkers with limited English proficiency.

Those are Spanish, Chinese, Russian, Korean, Italian and French Creole.

The mayor says the 1.8 million New Yorkers who struggle with speaking English should be able to interact more easily with government.

Now they'll enjoy the same shitty service from the city that English speakers do, but at least understand when they're getting the shaft.
Posted by Queens Crapper at 12:19 AM

Isn't it just great that NY will now cater to those who come into this country so that they don't have to learn English? As you all know, in Forest Hills, it's hard to find someone who DOES speak English and not Russian. It's insane. This is just going to make things a thousand times worse.

Commissar Moron tells the illegal aliens who speak the other 6794 languages to go shit in their hats. The UN Reps for those illegals didn't pay tribute to the Commissariat.

Oh, yeah. It won't cost a penny for these criminals to have their begging for more money translated; we'll pick up that tab, too.

Steve, what Forest Hills are you talking about???

Do you get a very small sample group and run with it or do you make this up as you go along?

Every store they speak English and except for small 3 block groups (like all neighborhods, ie Polish in Middle Village) most people speak English, and an accent doen't mean they arent speaking english either.

Money that would be better spent on... oh I don't know... Immigrant English classes?

Why doesn't the city give a breakdown where every dollar in taxes we pay goes to?

I'm outraged that Boston Mike is telling parents there isn't enough money for schools, but he'll make sure that an alien who refuses to learn English (legal or illegal) can go to every single city agency and have their arrogant needs catered to.

So, translating everything Bloomie, is a MISTAKE just like New Yorkers electing YOU was.

I am outraged. This is America, learn english. I am tired of my tax dollars being spent on projects most New Yorker's are against. Who is he to take it upon himself to spend on this instead of our school teachers, police officers, EMT's and other city agencies that are in desperate need of funds. Shame on him once again!

It was the most diverse city in the early 1900s, too, I am sure. But my great-grandparents learned English and ONLY spoke English at home with their children. Why is it soooooo wrong to expect people to do the same today?

Our Mayor has surrounded himself with extreme left liberals. They encourage him with feel good programs that cost millions of taxpayer dollars. They conspire with him that these programs will help those unfortunate people in the city who desperately need to be saved by him and his liberal friends. The council funds them. They do not care of the effectiveness or the consequences of these programs; they only care about the feel good intentions. When he implements them they all gather around him and applaud and pat each other on the back. The media congratulates them and most of the public accepts it. Never taken into account that the funds needed for these endeavors come directly from the taxes of the working class. The middle income guy or gal who works hard and watches every penny. It is so sad that know one represents us.

"Why is it soooooo wrong to expect people to do the same today?"

It's fine to expect people to do the same today. But then on that same token, in our grandparents time when someone didn't speak English, it was their problem, not the taxpayers'. Grandma didn't expect official correspondence from the city to be in German.

I would laugh if a victim of one these "immigrants" beats the hell out of the Mayor with a pipe!

I don't recall being consulted about this matter. I am a taxpayer. I am the person who is footing the bill. Why wasn't this issue put on a referendum so the taxpayers could vote on this? I'm sick and tired of Bloomberg deciding how to spend my money. Surely this money could have been put to better use. Let the illegals learn English. They already get an abundance of benefits, i.e. health care at city hospitals, welfare, food stamps. I pay enough taxes in this city. I should be included in the decision as to how it is being used.

ANONYMOUS: I don't recall being consulted about this matter.

Direct democracy might have worked in Athens in the 5th Century B.C. - at least for everyone who wasn't a woman or a slave - and it might still work in tiny New England towns today, but it's impractical anyplace larger. We have a representative democracy here. Consultations are called "elections" - you vote for the person whom you believe most perfectly represents your point of view. Unless you happen to be George W. Bush you agree to abide by the results of the election until the time comes for the next election. That, or you attempt to exercise your inherent right of revolution.

"Us New York City residents think that you and your administrations'
performance really bites the one eyed worm"!