Welcome to our sanctuary city 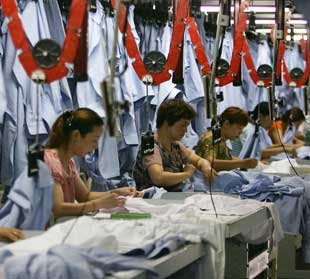 A garment factory in Long Island City, Queens, was busted Wednesday by the state Department of Labor for underpaying its workers and deliberately concealing sweatshop conditions.

Jin Shun Inc., which operates at 47-51 33rd St., underpaid 100 workers by $3 million since 2005 by ignoring minimum wage laws and instead paying them for each piece of clothing they finished, labor department official said.

The department alleges that Jin Shun’s owners, Jikai Lin and Zhang Yun Chen, tried to conceal its violations by asking employees to memorize mock question-and-answer sheets they could use in response to investigators’ questions. Some workers are said to have put in as much as 84 hours a week with no overtime.

Wow - In the past week Queens has seen stories about slavery, forced prostitution, sweatshops...what year are we in?
Posted by Queens Crapper at 12:56 AM

Im prety sure ive been past this slave labor warehouse a few times biking by.And not too long ago there was a forced Asian prostitution ring that was busted in Queens.Nice oversite there bloomy and co.

This sweatshop has been at that site for 2 decades - perhaps under different ownerships. I worked across the street from this site and know it first hand.

But what really makes this interesting is that NYC gov is neighbors with this sweatshop and continually ignored the situation. It maybe that the City now wants the valuable building that houses the sweatshop, to expand their operations.

They're classified as OTM - Other Than Mexicans. So what will happen is that they'll be given a date to show up for their hearing, and released back to the streets.

They'll also be given a special visa if they agree to file a complaint against their employer. With that Visa, they'll be able to bring over their families.

To anonymous #1. There isn't any forced prostitution rings anywhere in the USA involving illegal aliens.

These women come here to make money, and are free to call the police if they feel like they're being abused. 911 will have an operator who speaks their language. All they have to do is say "I Chinese" in broken english and they'll get that translator.

They don't because they like the money. They're criminals who spread disease, and deserve no sympathy.

The women forced into prostitution were from Mexico.

Truman Harris said...
This comment has been removed by the author.
Thursday, July 24, 2008

"These women come here to make money, and are free to call the police if they feel like they're being abused. 911 will have an operator who speaks their language. All they have to do is say "I Chinese" in broken english and they'll get that translator.

They don't because they like the money. They're criminals who spread disease, and deserve no sympathy."

How ignorant can you be? Ever heard of human trafficking? These pimps threaten to kill them and their families back home if they tell the police anything.

And no, women/girls do NOT enjoy having sex with 20 men a day.

"Wow - In the past week Queens has seen stories about slavery, forced prostitution, sweatshops...what year are we in?"

Forced prostitution is very much alive today the world over unfortunately.

"Forced prostitution is very much alive today the world over unfortunately."

But America is supposed to be above this. This is where the huddled masses come to breathe free, don't forget.

Forced prostitution is a huge problem in this country. It's not just an Eastern European problem.

To the men out there:

if any of you visit a brothel or strip club, you can bet at least some of those young women are FORCED to be there even though they may not act like it. Drugs to can do wonders for misery.

Knowing that these workers were being paid even less than minimum wage is a good thing, for him. His loyalties are to Macy’s, Gap, Banana Republic, Express, Victoria’s Secret, Limited and Coldwater Creek. They are the true economic forces. These women are nothing. They exist to be abused. Never forget the Commissar's words to the woman's happy announcement of her pregnancy: "Kill it", ordered her boss, Commissar Death and Taxes. The pregnancy would interfere with profits.

In the same vein, obeying the labor laws in regard to these women would have lowered profits for the Commissar's supporters. So they would be forced to work 84 hour weeks without overtime pay? Screw them, says the Commissar. These women were never going to contribute to his retirement. Besides, after an 84 hour workweek, they would be too tired to get pregnant, thereby defying the profit needs of his merchant friends.

Slavery is alive and well in NYC. Bloomberg will translate in all languages to keep them here and keep them happy. The illegals don't ask for much. They make more money in sweatshops here than at home. The rich people can exploit them and pay them as little as possible. Everyone wins!

The forced prostitution ring was Asian,and that was a bust about two years ago.Look on your backs too, at your clothing tags.If it says made in the USA then according Bush senior and clinton as well as NAFTA then it can be made in South east Asia.Its not a surprise because in the U.S. no one cares where there clothes came from.

So where is John Liu in all this?

Can anyone IMAGINE what would be going on if the buisiness owners were Caucasian? The HOWLING would burst your eardrums.

So John...what are you doing with your "office" ?

And NONE of this occurred in Willets Point! -Which the city would have you believe is "riddled with crime!"

"But what really makes this interesting is that NYC gov is neighbors with this sweatshop and continually ignored the situation. It maybe that the City now wants the valuable building that houses the sweatshop, to expand their operations"

Surprise, surprise. The city loves to ignore what it later wants to "acquire".

Read "McMafia" by Misha Glenny if you really want to know what kind of sex trafficking is going on. Women and girls from China, Albania, you name it are being sent all over the world to suck the you-know-whats of exploitative perverts everywhere.

There was a forced prostitution ring
busted near the north west corner of 154th Street and Northern Blv'd. in Flushing about a year and a half ago....at the Rennaisance Cafe.....moron!