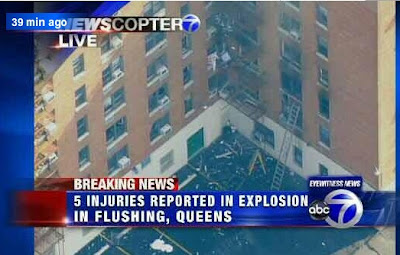 2 of the injured are critical; 37 apartments left unlivable

QUEENS (WABC) -- Dozens of Queens residents are displaced this morning after a gas explosion at an apartment building that injured 17 people, two of them critically.

The incident happened at a six-story building located at 147-25 Sanford Avenue in Flushing.

Authorities say two of the victims are in critical condition. Eight civilians and six firefighters suffered minor injuries. Another civilian suffered serious but not life-threatening injuries.

Preliminary reports were that a gas explosion preceeded a fire that burned on multiple floors of the 90-unit building.

Debris could be seen scattered on fire escapes and around the building.

As fire marshals investigated what caused the two-alarm blaze, City Councilman John Liu raised the possibility of calling for a criminal investigation.

The explosion came minutes after natural gas service was restored at the 1962 building, which had been largely without it for more than a month. State Assemblywoman Ellen Young called the blast an example of "neglect turned tragic."

In a Daily News article published just two weeks ago, residents of the building said a small kitchen fire in one of the apartments had knocked out gas service to the entire building.

Natural gas - which can be turned back on only after a licensed plumber certifies it's safe - was restored Wednesday to part of the building, and Friday to another, Con Ed spokesman Chris Olert said.

It's the landlord's responsibility to secure an OK from the plumber, he added.

"It's up to the property owner to make it safe," he said.

Everything appeared to be in order when Con Ed workers left shortly at 4:13 p.m., Olert said. The explosion rocked the building 11 minutes later, according to firefighters.

Liu described the damage as "devastating" and said he was interviewing residents to see whether "there may be negligence involved, possibly criminal."

It wasn't clear when residents would be able to return. A junior high school across the street was opened as a shelter.

"After suffering for weeks with no hot water or gas, my constituents now find themselves having to live through an even worse nightmare," Liu said.

The utility shut-off spurred residents to start withholding rent earlier this month, the Daily News reported July 3. Alwall operations director Jeff Pace told the newspaper the landlord had spent tens of thousands of dollars on repairs to try to get the gas back on.

"I'm very sympathetic to the situation over there," Pace said. He said Con Edison had been slow to test a new gas line, which the utility denied.

The fire came nine months after a leaky kitchen gas hose in a Harlem apartment building fueled an explosion that hurt more than 20 people, including four badly burned girls.
Posted by Queens Crapper at 12:03 AM

Dose anybody know who Sanford St was named after? Thank You!
\\

I wish the speediest recovery to all those hurt!

good god, this was the apartment building that i used to live next to.

praying for a safe return of those homeless and recovery... especially to that 23-month old kid

So, Liu's constituents were without water and gas for a month?

What the f--k has he been doing about it for all this time besides grabbing another post disaster photo op?

This is yet another political Chinese fire drill on his part!