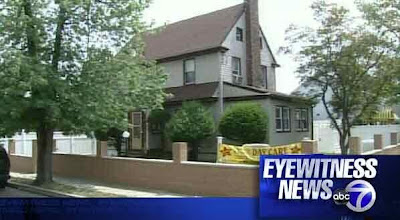 QUEENS (WABC) -- In a story first heard on Eyewitness News, there were some frightening moments for parents in Queens after they were called to pick their kids up at a daycare center Tuesday.

In a detached garage next to the center, officials found drugs and guns.

Police have arrested the daycare owner and are looking into if she was running a legitimate business.

Hugh Thomas says he dropped everything when a daycare worker called and told him to pick up his daughter Sydney.

The woman would not say why but he felt something was wrong.

"They just told me to come get my child," says Thomas.

Police sources say the husband and wife who live in this house at the corner of Hannibal street and 113th avenue got into an argument and someone called police.
A man barricaded himself in a detached garage just feet away from the kids.

Once officers got inside the garage they found two fully loaded guns and marijuana bricks.

Parents say seven frightened children were trapped inside the home.

Police arrested another man in this incident, and are looking for the business owners' partner.
Posted by Queens Crapper at 12:19 AM

"New residents like Mr. Blair have grown frustrated waiting for change to come to Bed-Stuy, a north-central Brooklyn neighborhood with high rates of crime and foreclosures, trash-strewn streets and limited night life."

If this fool doesn't like the neighborhood, why did he move into it in the first place? Now he's whining because it didn't metamorphose overnight into the perfect little yuppie conclave in which the unpleasant aspects of city life aren't swept under the rug.

"There is a subway station down the street from his building at Myrtle and Nostrand Avenues, but it is for the G train, which does not go into Manhattan."


Yes, but he can ride it about three stops to Hoyt-Scheremerhorn, for example and transfer to the A into Manhattan.

It's difficult to work up a great deal of sympathy for this guy and his huge sense of entitlement. He made the choice to move into this place. No one forced him to.