The latest blow to Broadway-Flushing

"Attached are the photos of 32-42 160th Street. By the time we all sit down for dinner tonight the house will be gone. Seth from Tony Avella’s office is attempting to get a Stop Work Order but the damage is done. Completely illegally. I put a call into 311 hours ago when they had just ripped off the roof (C1-1-1085024291) and was told it could take up to 40 days for an inspector to show up. What good is having the strictest zoning in the city and a restrictive covenant?" - anonymous 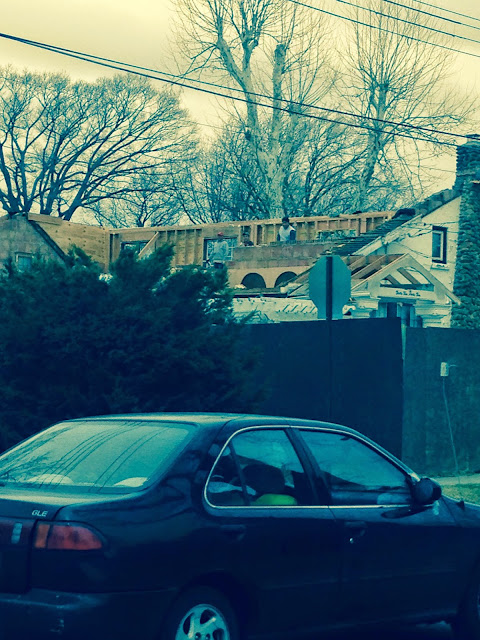 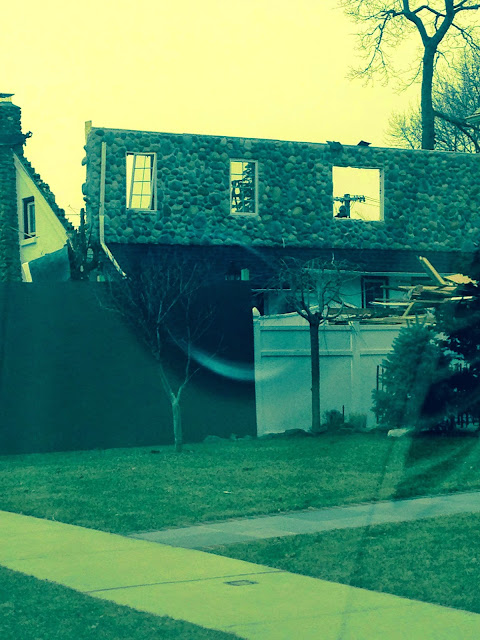 In the meantime, the permits are for raising the roof, but workers have been telling neighbors that this is a top to bottom teardown. 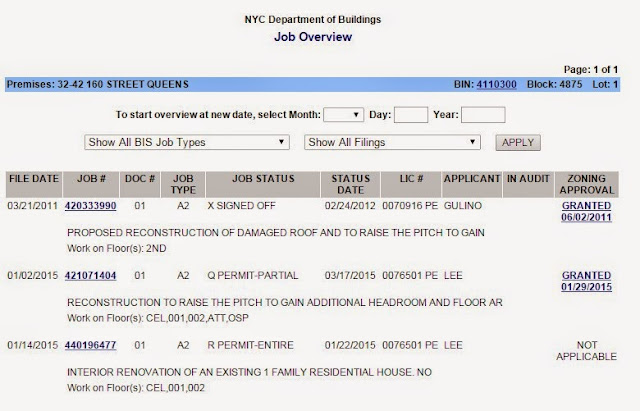 Interestingly, but not surprisingly, the zoning challenge that was submitted by the Broadway-Flushing Homeowners Association was ignored by the de Blasio administration and does not appear on DOB's website.

It's every neighborhood for itself.
Posted by Queens Crapper at 12:01 AM

You can complain all you want but the change that is happening is unstoppable
Thank Donald Mannis.

And now you know the rest of the story.

I wonder who the buyer is?
Maybe a nice irish family?

This was one of my favorite houses. The owners should be sent back home!

Thank Paul Vallone. He is not interested in going forward with the historic district that it's residents overwhelmingly presented a few years ago. This National register Historic district awaits municipal landmark status. Vallone is always cutting out of meetings early to attend some family event. Hmmmm...la Famiglia of developers?

This home was compromised years ago. Now it fits the category that the LPC loves to quote, "Too altered" to be eligible for designation.

Those social hours, after each BFHA General meetings are yummy. But the nabe is being gobbled up.

Go and squeeze Vallone's olives to move on landmarking. Take no excuses he tries to force feed you with to delay the process. Otherwise..."Coming soon to your stately neighborhood, Malba Mc Mansionville"!

If the US government recognizes our value enough to grant us national historic district status and so does New York State...what's holding up New York City?

What is holding back our councilman? He should be spearheading our efforts to have the LPC calendar Broadway for a designation hearing.

No delays, please, and no excuses!

Heard enough , consigliere Vallone? Move your butt , or else face defeat in the next election. Do you want to gamble with our voting block? Talk to your daddy. He would know better.

Could it be that all of your politicians are corrupt!

"Stinky Pinky" or the "Bubble Gum House" ( near Bowne Park) is a glimpse of the models we can expect in the future. LANDMARK STATUS NOW!

It isn't the first Zoning Challenge that has been ignored by Queens DOB!

Should we be takin' a chance on lovin' our neighborhood without municipal landmark protection?

I worked...next year it will be 30 years...trying to save the RKO Keith's theatre.
Without full landmark status only the ticket lobby and grand foyer was saved awaiting restoration.

What remnants of Broadway will be left in 30 years?
Will it be recognizable in 5 years?

New March Zoning Diagram ... open for challenges until April 21st ... but the damage has already been done.

More crap going up in Flushing!!

Moving to Brooklyn is looking better and better to me as the months go by. While I can still get a bundle for my home, I can do an even swap for a Crown Heights historic district townhouse. But if I wait too long, those fine Brooklyn houses are about to reach two million bucks. That will then be out of my reach.

All we keep hearing is Vallone-y baloney. That fool can crap from both ends of his alimentary canal at the same time.

You're going to lose a lot more of your favorite houses before winter sets in. Broadway is going bust! Hey, let's present the guy who is tearing down the home with one of our bronze plaques. LOL!

I'm thinking of starting up a new website, "Flushing Down The Toilet" . Wadda ya think? Maybe we can present a series of "Golden Doo Doo" awards, online to some deserving homes.

I invite anyone to feel free to use my ideas. Anyone for starting up such a website?

Another suggestion is "Bye Bye Broadway".
Too cynical? Maybe. The situation is grave., however.

BTW.
Is a certain president of a certain civic association still against landmarking?

We in Broadway have been "most fortunate". First we had a former state assemblyman that went to jail. This was followed by a former city councilman that has been sentenced to 10 years in prison.

Gag! And now we have Paul Vallone who does as little as possible to protect his district from ruin.

Paul Vallone blows as a councilman. That is a big part of the problem in Broadway.
He prefers to support developers over his constituency. He's anti preservation! He's a developers' lobbyist.

Look at the bogus bill he is introducing regarding our Rickert Finlay covenants. There is no teeth in it for NYC to enforce these deed restrictions. This is a watered down effort.

Don Paulo is afraid to give his own neighborhood any power over his developer clients. They might cut off his campaign contributions.

Did you all know that you elected a political mafioso to represent you in the city council?

As each stately home gets torn down and replaced with a shit box, maybe you voters will wake up?

This was just one on a list of "favorite houses" that have been demolished over the years. Then there are those abortions that were created under an alteration permit that survive. Gag! Expect more eyesores in the near future.

Hope the gas line was shut off by Con Ed. That is something neighbors should make sure happens. You can bet it doesn't always happen.

No one cares util after the fact. DOB AND CON ED need to be on the same page.