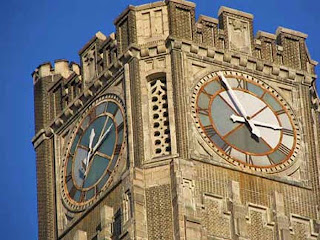 The public will be able to weigh in on whether the Clock Tower building in Queens Plaza should be designated a landmark at a meeting on Tuesday.

After the Landmarks Preservation Commission agreed to consider the former Bank of Manhattan Building for landmarking last month, it's holding a hearing concerning the designation.

Local preservationists have been pushing to preserve the building at 29-27 Queens Plaza North, which they say is an iconic focal point in the rapidly-changing neighborhood.

"I think it's just so recognizable for that area," said Christian Emanuel, one of the organizers campaigning to see the building preserved, who's father currently works out of the Clock Tower building.

"This is a highly-decorated building that survived through a lot," he said, pointing to the rapid pace of development happening in Queens Plaza and Court Square, including thousands of new apartments.

"I think the old gets more beautiful when it sticks out more," Emanuel continued.
Posted by Queens Crapper at 12:23 AM

There is nothing left to preserve there...except the Queensboro Bridge.
Time has moved on and political corruption has wiped out the area. This. Is Queens. We have little and deserve nothing. That is the way our borough presidents have seen it for decades.

There is nothing left to preserve there...except the Queensboro Bridge.
Time has moved on and political corruption has wiped out the area. This. Is Queens. We have little and deserve nothing. That is the way our borough presidents have seen it for decade.

How about the millstones you *sswipe.

There is something that just does not ring right about that building.

The previous owner was a real jerk when approached to make the lobby as an excellent community center probably at the encouragement of the Vallones and disgraced library trustee Stamatiades.

Local preservationists? Well, lets do a few minutes of digging and see what we can come up with....

Michael Hall: Friends of the Upper East Side Historic Districts
Evaluate the applications with the architects, present the proposals to the committee, formulate a position based on the committee’s findings, and offer advisory testimony at each public hearing at the Landmarks Preservation Commission.

Special projects include managing the ongoing survey of architectural resources in the neighborhood of Yorkville, overseeing interns, and design of in-house marketing materials and publications.

Mathew and Michael are partners in
+ Partners.

Their office has launched a comprehensive architectural survey of Long Island City and will produce an online open database, archiving the current state of the neighborhood as it undergoes a period of massive redevelopment.

IT IS ANTICIPATED THAT A STUDY OF THE SURVEY WILL INFORM FUTURE PROJECTS TO IMPROVE AND GUIDE THE DEVELOPMENT OF THE AREA.

Christian is a graduate of New York University’s Film and Television program, where he also double majored in Religious Studies and played Ice Hockey.

While these people are being marketed as 'community organizers' this seems far from the truth. Indeed, they seem to be more hired guns to help the 70 story tower get there.

Considering the landlord's typical churlish hostility toward landmarking that infests the politician and real estate circles of this benighted borough, these seems little more than yet another sordid chapter on the misuse of a law whose original intention was so different.

The fact is that this building has been jobbed repeatedly by one local artist after another over a period of years and gotten nowhere.

So they had to bring in hired guns from outside to get it done.

Sorry to burst your balloon Mr. M.P. Like your average Queens civic leader, you are duped again.

And wasn't it nice that HDC has mentioned this particular effort for special attention - while other efforts by locals throughout the borough gets ignored?

The mill stones? LOL!
You have been looking up your own ass for too long, fella.
They are not the pyramids of Egypt.
When we have only a pair of granite donuts to brag about, I think we are in worse shape then I ever Imagined.
Move those stones into a museum and brag about something else that is really worth saving.
What a bereft borough we are, in mind, spirit and gumption. It's people like you who fight to preserve ant hills and let really important sites vanish.

Wait until that huge tower near Silvercup rises. The LIC landscape's destiny is to face obliteration.

By local preservationists do you mean the Greater Astoria Historical Society? Yes, I know this is LIC and not Astoria, but aren't they interested in this turf too?

Save the God damn Steinway Mansion from being surrounded by high rises! This is a lost cause. Lock 'n load and do some real fighting.

Move the clock tower portion to Gantry Park. It's going to get lost where it is anyway. It's already overshadowed with tall buildings as it is.

In Queens if you express an opinion, a duty, right and obligation of all citizens, the pols will not fund you.

That is why this effort is so blatant as a pro-development move.

We invite the boys that are so passionate about this place to go out to Richmond Hill or Broadway Flushing and to some real fighting that actually benefits the people of Queens instead of developers.

Particularly that fellow that works for the Upper East Side Historic District. Queens Civic Congress can use your insight.

How about it boys?

PS Welcome to Queens kiddies. You ain't in grad school anymore. Sorry this board outed you all - but then, again, your photo spread series in white shorts are just so precious.

IT IS ANTICIPATED THAT A STUDY OF THE SURVEY WILL INFORM FUTURE PROJECTS TO IMPROVE AND GUIDE THE DEVELOPMENT OF THE AREA.

Whats wrong with the people already living in Queens?

I am sick and tired of some preppie a-hole coming over here to insult us and tell us how things are better because they walk around like zomies sharing with their airbain buddies an instragram of an ice tea they just bought.

And its worse that our elected officials just smile at these snide put downs at us while they pocket donations from these nitwit's landlords and restaurant owners.

They will live anywhere. Most lived in crap in their old country. Living on top of a sewage treatment facility would be an improvement for these folks.
There are some streets in China where the effluent runs in the streeets and mingles with the drinking water.
What the he'll, China is overpopulated anyway, and it's government doesn't mind if thousands die.