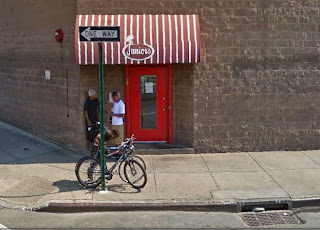 No amount of scrumptious dessert makes the news go down easier that Junior’s, maker of Brooklyn’s signature cheesecake, will soon shut its Queens bakery and reopen in New Jersey.

The move comes not because Junior’s is fading; its flagship restaurant beams brightly at the foot of Flatbush Ave. But the company, which churns out more than a million cheesecakes a year, cannot justify the cost of industrial real estate in the five boroughs.

Streit’s, the venerable matzo baker still in its 1925 Lower East Side home, is decamping to Pennsylvania while pondering a move to Rockland or Westchester counties.

Stella D’oro, whose heavenly scents once kissed the Deegan Expressway; Taystee, which moved its 400 Flushing baking jobs to Pennsylvania after fleecing the city for tax breaks; Bazzini, the Bronx firm that roasted Yankee Stadium’s nuts; and Old London Foods, a mighty maker of Melba toast, linger only in the sense-memories of New Yorkers.

Firms like those were canaries in the coal mine, lured away with the honey of tax breaks or repelled by the vinegar of union combat. Junior’s is the coal mine. That an employer of 60 felt it had no choice but to leave is a distressing sign of the city’s inability to retain middle-class jobs.

Among other forces, conversions of factories to living spaces — hello, Williamsburg and Long Island City — have helped drive the cost of manufacturing space out of reach.
Posted by Queens Crapper at 12:01 AM

I can see the problem with NYC pricing out companies trying to make a living.

What I don't get with this story is that they are going to New Jersey. Don't they have a similar tax burden always putting them, like us, in the top of the states unfriendly to business'?

Maybe they got a deal and they should be thanking the NJ taxpayer who is making up the shortfall for their tax break.

This makes me think of Robert DeNiro complaining about DeBlasio not supporting the Tribeca Film Festival. Why should taxpayers support this millionaire? You already get enough tax breaks on filming in NYC, as well as the city bending over backwards to accommodate with parking and traffic changes to allow shoots.

And yet, the purported political leadership is once again (as always),missing in action---except when it comes time to self-appoint (and anoint) a pay raise (that wasn't publicly approved or advocated).

Where, oh where was Wall Street Wizard, Mike Bloomberg, throughout the exodus of so many NYC established businesses that defined the region like nothing else ever could? Oh, that's right, he was busy with his pals, like Deputy Mayor Doctoroff, engineering crooked land deals to destroy New York--not to mention illegally selling Willets Point property for a dollar, that was worth more than $250 million---that wasn't his to sell in the first place!

Now, that he's finally gone after abrogating the law of term limits (thankfully, I think), it's even worse with the new circus and side show in town---where only the unfunny clowns are different!

Larger employers with more than 100 employees might be able to get a deal cut for them for a few years of tax abatement.

But with 40 employees, as Crappy points out, there's only the standard NYC tax burden. There's also no worse regulatory environment and leasing costs than NYC.

The mystery is why pick NJ over PA for a new location?

Where was Bloomberg? Caving to NIMBYs that don't want their neighborhood to get denser while still trying to increase the housing supply enough to moderate the rising prices. So downzone existing residential neighborhoods like Broadway flushing means allowing residential competition in cheap industrial zones.

Want your old neighborhoods to stay as they are, affordable housing for people who don't already own, and cheap industrial space for businesses? You can't have it all.

Sorry, but tens of thousands of units were added under Bloomberg. Nothing changed. Furthermore, businesses like Juniors are moving because of the cost of doing business, like being forced to payunion wages, insurance, taxes and fees. Real estate is a part, but not the biggest part.

Most neighborhoods were massively upzoned during the Bloomberg administration, and the ones that had downzoning had upzoning along major thoroughfares.

But that was a nice try.

You should write for YIMBY if you don't already.

Only a reflection of our national policy. America keeps exporting its jobs to the third world. Could that be , in part, to excessive labor union demands? I don't know.

We don't make anything. We import practically everything.
NYC's chief product is real estate. REBNY makes policy here. They may not manufacture any sympathetic politicians, but they certainly buy them.

We don't make anything. We import practically everything.
NYC's chief product is real estate. REBNY makes policy here. They may not manufacture any sympathetic politicians, but they certainly buy them. Want an example? Paul,Valllone! They paid for his campaign material (printed by CB7's own, Chuck Apaelian). Isn't that a conflict of interest? Yeah, right! Go and complain to the director of community boards. Another bought and paid for party hack.

Labor unions' excessive wage demands and Americans buying cheap imports because they could not afford to buy American is what emptied those Williamsburg and LIC factories. Blame yourselves, citizens!
But America. Your purchase will last longer and provide long term jobs right here in the USA......not temporary construction or low paying mall jobs.!

Buy American! We are supporting China's disregard for humanity.

I was ready to buy a DeWalt, Bosch, Black & Decker cordless drill for about $200. Then I noticed the box. "Made in China" , it read. I put my money back in my wallet and will do a little more research before I support a communist government that doesn't care about its own people. There must be a good drill made In Sweeden. I'll even up my price for better quality.

Without question NYC is an expensive place to run a manufacturing concern, but the skyrocketing value of real estate had made the opportunity cost of running a factory in deindustrializing neighborhoods outrageous. There is just too much money for landowners to make in selling out to developers than to hold out eking diminishing margins making stuff. It's a sellers market and the developers hold all the cards.

If we had kept our manufacturing zones for manufacturing there would be no problem. Instead we manufacture cheap condo conversions for dumb hipsters to buy just so they can feel they o wn a piece of New York. LOL! Most of it is located in flood zones. Keeep a rowboat handy.