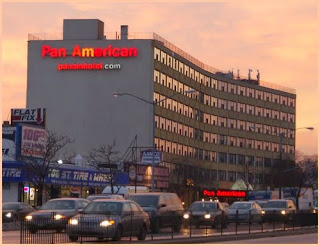 Gov. Cuomo’s administration on Tuesday gave the city a week to clean up homeless shelters perenially plagued by code violations, including a Queens hotel that’s hosting a vermin colony.

In a letter obtained by the Daily News, Sharon Devine, acting commissioner of the state Office of Temporary & Disability Assistance, warned the city homeless services department it could be facing big fines.

Devine cited a city Department of Investigation probe that found multiple code violations at 24 shelters, plus a News report Tuesday about a rat colony behind the Pan Am Hotel in Elmhurst.

Noting that these conditions “are not isolated,” Devine also singled out the Pan Am Hotel report in the News:

“Published reports today highlight substandard living conditions existing at the Pan American hotel in Elmhurst Queens,” Devine wrote. “We have concluded an independent inspection of that facility and have confirmed several serious violations.”

Devine ordered DHS to fix the problems within seven days. If DHS fails to comply, the state could withhold payments, impose daily fines, ask a court to appoint a receiver or even close problem shelters.

In response, a DHS spokesperson faulted the state for not providing more money to address what has been a steadily growing homeless population in the city.

The Pan Am opened almost a year ago, so what is the excuse? Why does DHS need more money when they have contracts with providers who are supposed to be taking care of conditions at these sites? Please sign the petition I posted in the sidebar. Maybe we can get Stringer to give this slimy provider, Samaritan Village,s the boot.
Posted by Queens Crapper at 12:20 AM

It worked at Manzanar. It'll work in NYC.

I don't understand why a hotel can actually house homeless people. Who is going to want to stay at this "hotel" with homeless people walking around everywhere? I wonder how much of a tax break this hotel is getting. I'll make a note to myself to stay far away from this site!

Did Cuomo have the State check out the shelters run by Help USA where his sister sits on the board? Almost all of the homeless shelter providers have health and safety violations up the ying-yang. What should be investigated is the way these no bid contracts are handed out to the "non profits", all of whom have political ties to the City or State. These "non profits" are raking in millions of our tax dollars and provide substandard service. Who's getting rich off our money?

Of course they have a rat problem. Hotel was not built for families to live in (how can they be expected to live w/o kitchens, for example?) and is not equipped to handle as much waste as is being created.

"If DHS fails to comply, the state could withhold payments, impose daily fines, ask a court to appoint a receiver or even close problem shelters." So remind me again how this helps the NYC taxpayer? F- Cuomo. F- Duhblazio. F- them all.

It could be worse. They could have installed Civic Virtue out front.

This is the direct result of people wanting to "do something" about housing. SRO that housed 500,000 New Yorkers in 1950 don't exist anymore. Instead you have four 20 somethings paying $800 each a month for a 2 bedroom apt. Replacing low rise apartments in the Bx with houses instead of land banking after the arson and firehouse closures of the 70's was another dud.

Flattening low rise dense neighborhoods, that were poor but close nit, scattering the residents hither and yon, and replacing them with superblocks and policies that concentrated and institutionalized both poverty and dysfunction, was yet another dud.