Lack of opportunity in NYS 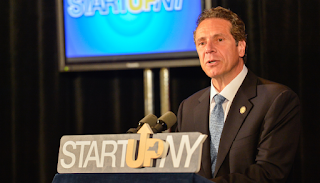 New York has the bleakest economic outlook of any state in the nation, a report released Wednesday found.

The American Legislative Exchange Council, a conservative-leaning think tank, made the dire assessment in its annual “Rich States, Poor States” study — blaming New York’s high taxes. It was the fifth time in the last six years that New York ranked 50th in the annual study.

Companies participating in the state's Start-Up NY program created a total of 76 jobs last year in exchange for $56,650 in tax benefits, according to a report on the program's inaugural year of operation.

Governor Andrew Cuomo has often touted the program, which creates tax-free zones rooted in university campuses, for its promised job creation and investment numbers offered by the accepted companies. The report issued this week by Empire State Development is the first time the Start Up-NY's actual numbers have been documents.

The 54 companies approved last year by E.S.D.—33 of which are new to New York—have thus far created 76 of the 2,085 jobs they promised. The companies also promised $91.3 million in investment, and have so far delivered on $1.7 million of that, according to the report. Those numbers translate to 3.6 percent of the promised jobs, and 1.9 percent of the promised investment.
Posted by Queens Crapper at 12:04 AM

Start up NY is a dud. Was right from the start. $25 million squandered.

I know many retirees who would like to move upstate but choose Florida or Pennsylvania instead. Much lower property taxes and more value for the buck when buying or renting a place to call home.

It's abundantly clear to everyone but Governor Cuomo and his entrenched, totally corrupt Albany that no business has any faith in setting up shop in New York State---because the systemic levels of corruption itself are making it virtually impossible for anyone to live here---except the corrupt politicians themselves. Just like the fall of the Roman Empire, New York's power mongers are so bent on privilege, private splendor (and unjust enrichment), that they still haven't awoke from their suspended state of Yuppie, cradle-to-grave Fantasia to see the vast, irreparable damage that their own monstrous greed, corruption and graft have turned a former, independent and self reliant city and state into a heaping, corrosive pile of public beggary, obscurity, quiet desperation and public squalor!

New York City and State is now a hollow place of nihilism for hollow plutocrats. Unbelievably sad, but true!

New York State thinks that spending money on commercials touting the "opportunity" in New York to a get a few years tax relief is going to turn things around.

States like Texas and North Carolina are going to continue to grow because they are doing what it takes to attract businesses.