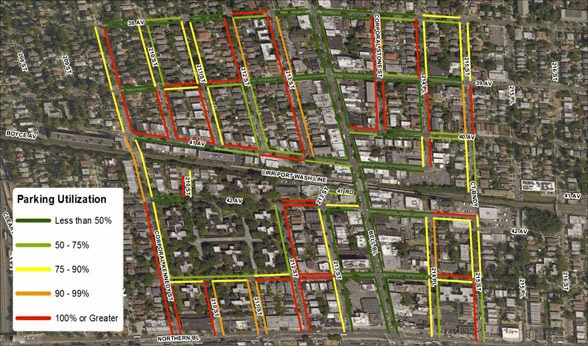 Matt Carmody, the director of transportation for VHB, presented “heat maps” during the public meeting, which displayed the utilization of parking on residential streets within a half mile radius of the LIRR Station on 41st Avenue, color coding the streets at different times of day.

The streets with a utilization rate at or above 85 percent were marked in red. And between 8 a.m. and the end of data collection at 7 p.m., the residential street map of Bayside was almost nothing but red.

In VHB’s findings, the municipal lot does not fill up until the afternoon, around 1 p.m. But once it is full, it stays full, because there are limited options at that point in the day for parking on residential streets.

One of the most attractive short-term solutions to those community members present at the public meeting was to introduce a parking permit system for employees and business owners offstreet and on side streets, which VHB consultants said might take away some of the cars now parked in meter spots.

Other more long-term solutions proposed include working with DOT to reconfigure and stripe on-street parking spaces and readjust meter rates for different times of day. Also, Sclair said the BID would look into ways to encourage a private entity to buy the municipal DOT lot from the city to build a parking garage further down the line.
Posted by Queens Crapper at 12:07 AM

If the asians would stop tearing down one family houses and making it into multiple family dwellings, then maybe just maybe we would have more parking available. But since the government allows it to happen, then we are all stuck with overcrowded neighborhoods and nowhere to park. Look up the block from me, the asians were allowed to open up a Chinese restaurant with no parking lot! They "claim" that the back of the store by the trash bins is a parking lot but yet it only fits 4 cars in it! Meanwhile, people's driveways are getting blocked in because the customers all want to park next to the restaurant but they don't want to park on northern blvd to pay the meters. I have neighbors that draw yellow lines on their driveway and put up big "no parking " signs.....sometimes that doesn't even work though! Bayside has become too crowded and overdeveloped! I was born and raised here so I've seen the destruction of the neighborhood within recent years!

The real destruction in neighborhoods like Bayside (not to mention Ozone Park, Woodhaven, Richmond Hill, Kew Gardens, Rego Park, Forest Hills (and too many others to name), is the false, fake and failed political leadership that even Caligula himself would judiciously reject!

I feel your pain, Bayside residents, with regard to the 'ASIAN INVASION' (no, not beetles and other insects!), because here in Ozone Park we are burdened with a recalcitrant pair of horrifying examples in failed leadership, a SCOURGE more COMMONLY known as Joe Addabbo (AKA, 'ADHT Joe'), and Eric (the derrick, as in wrecking ball) Ulrich--and the duo make up the deadliest epitome of un-suave, political worthlessness, and working examples in active treason, public integrity betrayal and epic fail that is as arrogant, as it is unprecedented---and all of this is on top of their well worn penchant for never employing a relative, friend, cousin-in-law, niece, etc., that they didn't like---or, the Friends & Family plan of voracious thievery, as I correctly like to explain and reveal it for its ostensible purpose).

Now, there was a time when Bayside was all sewed up with a crook, err, councilman named Tony Avella (I called him the friendly robber (yes, I lampoon our local politicians with examples of hardly commendable behavior that illustrates their strongest points of human fail and weakness), and although I don't know which new criminal du jour has been elected to fill Avella's underground pit (where bright, cleansing sunshine is never welcome), I certainly empathize with the many new (and old that is once again new), plights of our Baysiders to the north.

Sadly, it doesn't matter where hardworking, overburdened residents live in Queens anymore, because the borough itself has been overtaken by a swarm of foreign, low wage, unskilled locusts (peasants, really, with a fully accessorized wardrobe to match), that continue to create a blighted landscape of over crowding, filth, clutter and Un-American living standards that no longer exist in Third World countries---but continue to flourish here, exactly like the rapid regrowth of crabgrass that was just ripped out from its breeding point!

Now, when friends and visitors become involuntarily "detoured" at JFK and LGA airports (because many, if not all, simply bypass Queens altogether, mainly because of the raw sewage plant that all politicians have turned it into, but who continue to voraciously feed off the endless flow of sewage and polluted runoff, nonetheless), they collectively stare in disbelief at the wasteland that abounds.

Then, they quizzically ask me, "But, where is the art, culture, beauty, examples of Americana (ANY EXAMPLES!), progress, identifiable commerce, cleanliness, openness, public meeting squares (like the blighted Kew Gardens Plaza (that forcefully evicted Queens' most empowering statue, Triumph of Civic Virtue, for more than two years, and counting)," and any proven offerings that would persuade them to loiter here, longer than a hooker outside a church congregation!

Sadly, my answer is always the same: Please just Pass 'Go,' collect your $200 dollars and visit Manhattan, where a vibrant culture of visible public art, working fountains and statuary, museums, theaters and music halls await you, with the excitement, purpose, glitter, bright sided anticipation of the Emerald Isle itself! And, before the last syllable is spoken, they've already left me behind the dusty tumbleweeds of yet another failed and abandoned civilization formerly known as Queens!

The end. . .because, in Queens, it's been over since the ravages of Donald Manes!

Yes Richard "overtaken by a swarm of foreign, low wage, unskilled locusts" but not without the corrupt leaders who enable this destruction.
We the people of Queens are to blame because of our inaction to change the path by voting out the politicians who we put in office in the first place.

Hey Bayside welcome to my world it's called Flushing.

Don't blame the Asians. Blame the zoning. Then blame the crooked pol's who allowed it. Bottom line.....if you live too close to the tracks you will get congestion no matter what the zoning is
Never live in a transportation hub. That's for sure.
Look at downtown Flushing. Do you want to talk congestion? Poor little Bayside pussies. Flushingization has reached you...hasn't it? Grin and bear it. It will not go away!

"Grin and bear it. It will not go away!"
It will spread east and west like The Blob and eat you up !

Spread west? It has passed the west and is sitting like a pile of steaming doggy poo on your Bayside stoop.
That 's the price that Bayside is now paying for their isolationist views. " Flushingization will never reach us".
Never say never.

Want to point the blame finger? Blame it on the gentrification of neighborhoods in NYC's manhattan...