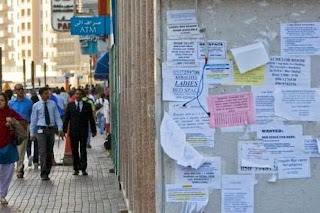 A Washington Heights woman who was fined $11,000 for posting 300 flyers in her neighborhood to advertise her babysitting services will not have to pay the massive fee, a Manhattan judge has ruled.

Pujols, who does not speak English, said in court documents that she did not know the city’s administrative code forbids putting handbills, stickers or other printed material on city-owned structures.

So she attached her flyers to bus stop shelters, garbage bins, street light stanchions and other publicly-owned surfaces in the summer of 2011, only to receive 149 violation notices from Department of Sanitation inspectors.

Each violation with a $75 fine.

Wooten said the city violated the Eighth Amendment, which bars excessive fines.
Posted by Queens Crapper at 12:34 AM

Don't get any idea's this will only work for you if you speak another language.

$75 per illegal posting is not excessive. Will the court at least require her to remove her illegally posted ads from city property?

Judge Paul Wooten. How did this moron ever get to sit on the bench?

I hope someone pastes an illegal sign on the judge's face and then says its not a crime.

How long before Supreme Court Justice Paul Wooten frees some "undocumented guest worker" because he didn't know that he couldn't get drunk, get behind the wheel of a car, and mow down people on the sidewalk?

The Daily News article doesn't appear to indicate if this person had to pay ANY fines. I would like to think she had to pay SOMETHING. If so, how much? Does anybody here know?

Also, it is yet another unfortunate indication that citizens have to take matters into their own hands when keeping their neighborhoods clean.

I'm sure we'd all rather not have to do so but a situation like this leaves us little choice.

Here's what we can do:

Take the numbers off any flyers you encounter on a daily basis and make it a hobby to call each of these slobs. (block your own number of course either through your cell phone settings or dial *67 first for a land line) If you can, call them late at night - or early in the morning - and often. If you get voice mail, see if you can fill up their mailbox.

Let the slob know that they are damaging city property and that they nave no respect for the community and are bringing it down.

Remind them that any additional money the city has to spend on maintenance and repair of city property comes out of other things like schools and such.

Tell them you have ripped down all of their signs that you have seen and will continue to do so in the future. Tell them they spent all that time putting up those illegal signs for ABSOLUTELY NOTHING since nobody else but YOU will call.
Tell them they have made an enemy in the community - YOU.

Tell them you will spread the word around the neighborhood that they are slobs who are damaging the community and that no one should use their services.

Then, spread the word. The Internet can help you with that. There are plenty of sites to post reviews of businesses. You don't have to lie. On the contrary, just tell the truth and write about the businesses' filthy, illegal, disrespectful, inconsiderate, damaging advertisement practices. (Make sure your review includes the businesses' phone numbers of course!)

Look, I know this is a lot of work with probably very little payoff but hey, gotta do something. Nobody else will, apparently.

Has John Liu paid all of his fines , for illegally posting his campaign flyers, yet?

Yes, Jerry Rotundi---fraudster John Liu! I love a good joke, but to suggest that Liu would actually obey the law instead of betraying it with impunity is one of the reasons why public voting has been steadily declining for more than four decades.

Political leadership itself epitomizes corruption that is hopelessly tainted from within--and getting worse by the hour! Between Albany and City Hall, if it weren't for unchecked corruption and graft, then there would be nothing to talk about---because actual change, accomplishment and public goodness that engenders policy enforcement (while punishing, jailing and disabusing corrupt politicians), is no where to be found.

Every time Governor Cuomo opens his crooked mouth and speaks of remedy, relief and change, I prepare myself for an avalanche of freshly delivered lies and bullshit that devalues honesty itself! Yet, he keeps getting away with it---with passes and complicity from the free and slanted press!

Does anyone wonder why New York State continues to come in last for retirement residency, when it's not even healthy and sane to live and work here in the first place? Alas, the corruption is never ending!

"I didn't know it was illegal ride my moped on the sidewalk."

"I didn't know it was illegal to put flyers in people's mailboxes."

"I didn't know it was illegal to dump my used motor oil into the storm drain."

One way people learn the law is by seeing it enforced.

Since these people seem to like printed adverts. It's time to stop by Barnes and pick up a couple dozen of those advert subscription cards that fall out of all the magazines. Fill me out for these folks and check off bill me. Soon thier mailbox will be overflowing with magazines. For about one issue. And then the bills come.

Ignorance of the law is not an excuse.