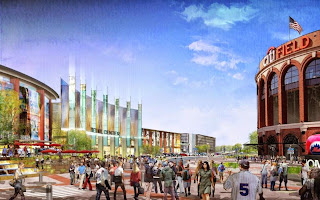 A judge for a state appeals court questioned the city’s plan to build a mega-mall on parkland in Queens, raising a concern that developers were getting an overly sweet deal.

Officials helped win over the City Council for the $3 billion Willets Point development in 2013 — which is slated to include a 1.4 million-square-foot shopping mall and a hotel near Citi Field — by upping the amount of affordable housing included in the project.

But one of the appellate panel’s judges said Wednesday she feared the relatively modest $35 million penalty that developers would incur if they don’t build the housing isn’t enough to see it through.

She said she was concerned that the deal could be a “win-win for developers and owners of malls.”

It is about time that "Justice" removed her blindfold , and start usin the sword she has in her hand. Bravo, judge. Now put Claire Shulman in an orange jump suit. Scope Wellinton Chen, her buddy, even if he's hiding out at the LPC. Chuck Apelian should be doing some time
Smash that spooked cabal that has been selling out the town. Just follow the money. It passes through CB7

Who do they think will shop there? All the malls are empty!

Queens is is borough of minimum wage employees crammed several families to an apartment!

Check out the Parc View mall - it's always empty except for Bjs and the Asian supermarket!

Nobody shops at malls anymore. ...people shop online nowadays mostly. There are alot of big chains that are closing these days because they aren't making ends meet.

Malls are dinosaurs. Park View is a dump utilized by 3rd World trash. People are rude and filthy.

The flushing mall is right across from there along the seven line. So what's the point to another mega mall? Also, why do we need another hotel in queens?

Nobody shops at malls, brick and mortar is dying yet what else can gangster real estate developers do? As long as the public votes to have their wages confiscated through federal, state and city taxes the developers will be happy to grab it.

I shop at malls.

Give those Willets Point United guys medals for sticking it out in fighting corrupt politics. Now, what's needed is a good federal investigation into Claire Shulman and her daisy chain of crooks.

People in Queens shop at malls on Long Island. Queens is a car borough. But muni lot # 1 gets replaced with Flushing Commons. There goes local business flushed down the toilet.

Sadly, this is yet another example of obvious subterfuge by former mayor, and so called Wall Street Wizard, Mike (the chameleon) Bloomberg.

No only did this voracious thief forcefully transform Manhattan (and the other four boroughs, to lesser, but equally insidious extent), into a luxury brand (strictly for tourists, transients, moguls, movers and shakers), that destroyed and displaced the American small and medium business owner to oblivion, but he has also created the greatest citywide divide of income inequality and privilege, versus public squalor, that New York has ever known---as he enriched himself and his pals with infinite wealth (all inveterate liars, cowards and shameless developers---really one and the same).

Now, Manhattan and everywhere else in NYC resembles a hideous New Jersey strip mall (where Jersey itself has evolved), and where all of the interesting Mom & Pop stores, boutiques, salons and curiosity shops have exiled to the friendlier and receptive middle-class environs of Memphis, Nashville, Raleigh-Durhan, Asheville, Atlanta, as well as the Pacific Northwest.

What Bloomberg, the purported Wall Street Wizard left of Manhattan (after 12 years of dictatorship and Neo-Fascism--like the city council itself), is a hollow town for hollow, nihilistic autocrats that has grown exponentially into a 'plutonomy' of even hollower plutocrasy---and the city's vapid, commercial landscape could not look more vapid!

Alas, the vibrancy and magic has left the island altogether, only to emerge victoriously in other parts of our divided, divisive and galvanized nation of class warfare, and ever developing Third Worldism. I am bereft.

Again,cap it and make it a small forest. No park, just trees to absorb all the pollution of 2 highways and too many mouthbreathers.