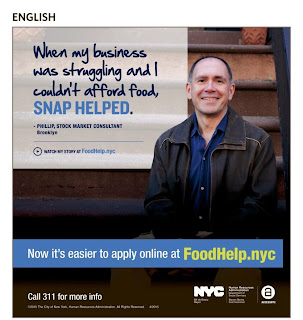 More than half a million New Yorkers who qualify for food stamps don’t get them, officials say — and the city wants them to sign up.

With a new website and ad campaign, the de Blasio administration will encourage people who are hungry or struggle to afford food to seek help. It’s especially targeting seniors and immigrants, who are most likely to qualify for food aid but not enroll in the program.

Mayor de Blasio said 1.4 million people in the city struggle to afford food, 20% of them children. “This is not only a striking indicator of the inequality crisis we face, but a status quo we don’t accept,” he said.

An average of 1.76 million city residents were getting food stamps last year. But officials believe another 550,000 people qualify but aren’t signed up.

If people have managed to get by without government assistance up to this point, why are we telling them to become dependent on it? Don't we want to promote self-sufficiency? And do they really expect us to believe that someone who lost a "lucrative Wall Street consultant job" or someone else who had a struggling business will actually qualify for food stamps?
Posted by Queens Crapper at 12:30 AM

Not sure how someone can determine that they "...managed to get by without government assistance..." Managing could mean skipping meals, eating less nutritious food, etc. (Then we complain when more people start panhandling.)

Come on, how many emaciated people do you see in NYC who aren't on drugs? Sacrifice is part of life.

And if you think the panhandlers really use that money on food, then there's a bridge in Brooklyn I can sell you.

We already give 2 free meals a day in school. No one's child is starving.

Then let he and " First Lady" pay out of their pockets for them. We have been already taxed to Hell!

Third worlders already flock to NYC like flies to honey. Welcome to sanctuary city where the rapidly eroding middle class is eager to support you. If the rich would assume my responsibility, with the scads of money that they have, I would not mind.

Let De Blase' take in some homeless and feed them too.he can put them all up in his Park Slope digs while he's living the good life at Gracie Mansion. This guy if a freakin' train wreck. Be sure to vote for anyone else but butt head Bill next time around. Gag....three more years of ruination for us Ll.

Speaking of de Blas digs in Park Slope, a report on the radio last week said he rented out his PS house and managed to take a loss on his income taxes over it. How does that work?

The Daily News story states that ads were being placed in nail salons. If you have money to get your nails done you can't be very hungry.

SIGN ME UP !!
I've joined the Free Stuff crowd
Give me More,
What else are you offering
I Swear I'll vote republican if I don't get the Fattest Teet on the Pig
uncle Bill ��

wait a second!!! did you see in the article some woman from Jamaica with 4 kids was "escaping from domestic violence from Jamaica"?? give me a break dude, we need to stop people from other states and countries coming here just to become homeless!!??! it doesn't make ANY SENSE!!

All the time at my local grocery store, I see people pay with food stamps and then watch them drive away in very, very expensive cars.

I have an "EBT" card and its funded
with your "DEBT" card.💃
I guess you can call me a "Debtacrat"

The thing that really bothers me is the fact that proof of legal US residency is not required for any of these expanded benefits. I also heard once that a private company that runs some of our homeless shelters was recruiting people in other states to come to NYC and request shelter. Who is going to pay for all this?

How about food stamps for the middle class? I have trouble making ends meet by paying to support third worlders. Oh, wait a minute, soon Iwill be on a downward spiral into the depths of the lower classes. Hurrah! Then. I can get food stamps plus all kinds of freebie stuff that I now have to pay for.

Things will be looking up when I finally fall down.
Then, and only then, will my government support me in the manner that I am accustomed to. Low class's seeems better than middle class's....hey.....what?

"Don't we want to promote self-sufficiency?"

If we promoted self-sufficiency, then the rentier heirs who live out in Old Westbury would have to do something they haven't done in generations - go out and work. Instead of leeching profit - surplus labor time - like parasites off those of us who do work. But we never here about the self-sufficiency of the minority of the opulent who haven't worked since they got off the boat, just for those who need food stamps because those same rentiers destroyed Glass-Steagall, had their banks fail, and then had we the taxpayer bail us out.

Um, yeah, Bill deBlasio has nothing to do with Old Westbury.

"Speaking of de Blas digs in Park Slope, a report on the radio last week said he rented out his PS house and managed to take a loss on his income taxes over it. How does that work?"

When you rent out a property, you can deduct your expenses for the property from the rental income, including R.E. tax, mortgage payments, and depreciation. It's a great tax deal, being a landlord.