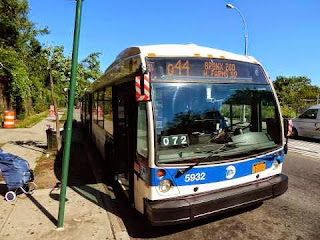 Facing community and political opposition, the MTA and the city Department of Transportation slammed the brakes on a proposed dedicated bus lane for the limited Q44 bus line on Main Street in Kew Gardens Hills.

The news came during Wednesday night’s meeting of the Kew Gardens Hills Civic Association. The MTA planned to take one lane in each direction of Main Street to convert the Q44 between Flushing and Jamaica into a Select Bus Service (SBS) route.

Civic leaders and elected officials protested the plans previously, claiming the lost lane of traffic would increase vehicular traffic on Main Street while also depriving both residents and shoppers of valued parking space.

The Queens Chronicle thinks the Woodhaven Blvd SBS plan should also be nixed.
Posted by Queens Crapper at 12:14 AM

The bottleneck at Union Turnpike and Woodhaven will only get worse if SBL is put into effect. Accidents would quadruple at that already dangerous intersection!

Another dumb idea that came back to bite somebody on the ass!

How much money was spent on a survey to promote dedicated bus lanes? At least somebody made some money off of this moronic idea. Well, let's do another survey and spend some more.

If we want to increase capacity and decrease congestion, make the lane a HOV-Bus lane. Its more palpable to auto owners. A parent driving a car with kids inn the back is a car pool.