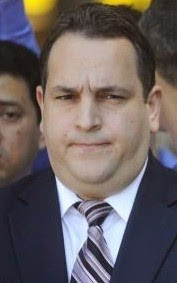 The disgraced former state senator lost his bid to get his corruption conviction tossed Thursday, while court filings reveal that he's deeply in the red.

Monserrate, a once powerful Queens pol, claims in papers filed with the Second Circuit Court of Appeals that "I am currently in great debt" and only has $220 in his bank account.

He says he's been eking buy on $1,120 a month from his job working for a law firm on Court Street in Brooklyn, plus another $2,270 a month from pension and other benefits - and $1,100 of that money goes to paying alimony and restitution.

Monserrate - who was expelled from the State Senate in 2010 for attacking his girlfriend - bared his expenses to get out of paying filing fees for his hoped-for appeal of his 2012 federal corruption conviction.
Posted by Queens Crapper at 12:44 AM

His face reflects his true character. You made your bed , Hiram, now lie in it.

Wonder if the "girlfriend" he "accidentally" cut up still wants to marry this poor boy?

If she does he must have a lot down there and she's got so little up there between her ears.

And you voters chose the crooked machine.

He looks like he is eating well for a guy that claims poverty.

Who is giving this prick a pension?

What still (and always), continues to frighten me about false, fake and failed and corrupt Queens political leadership is not what is enforeably illegal---but what has always remained LEGAL.

Monserrate became visibly arrogant and sloppy (as opposed to just plain arrogant, depraved and entitled, like every Queens pol), and that is what led to his demise (with pension benefits, no less).

But, what about the rest of the endless roster of corrupt and pathological Queens pols who are still in public service (and in good standing, despite shady records, as well as ignoring their constituents, with impunity), where, if it weren't for corruption itself, there would be no purported representation! Unbelievably sad, but true!

Good for him. Being broke is fair punishment. Though I don't have his debts, I make less than he does. Tough. Deal. Bye.

Where are his buddies from the national latino officers association? I gues they don't want to be tainted as they plan their next moves for political office. No honor there.....


But, what about the rest of the endless roster of corrupt and pathological Queens pols who are still in public service (and in good standing, despite shady records, as well as ignoring their constituents, with impunity)

Like Vito Lopez. This deviant still has a grip/grope on people.

How was he ever hired by the NYPD?

Last update about Karla Giraldo was she had to drop her nuisance suit against the city.

From his bio, I think Monserrate served as a U.S. Marine, and that gives you a preference in getting accepted into NYPD.

He is bankrupt on so many levels.