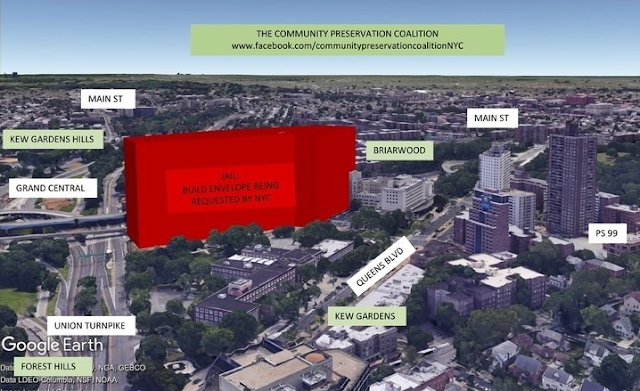 A group of homeowners in Kew Gardens, Forest Hills and Briarwood is planning to sue the city in a last-ditch effort to stop a new jail from going up in their neighborhood and get the mayor's office to return to the drawing board.

The group, which calls itself the Community Preservation Coalition, is preparing to file an Article 78 lawsuit over the city's decision to approve building a new jail in Kew Gardens, part of a $9 billion plan to replace the detention facilities on Rikers Island with a new jail in every borough except Staten Island by 2026.

Article 78 refers to a civil law that empowers New Yorkers to challenge decisions made by public agencies or officials on the grounds that it was unlawful, arbitrary or capricious.

"We really want them to do a meaningful review," Kew Gardens Civic Association President Dominick Pistone told Patch in an interview. "We don't think they've fulfilled their obligations under the City Charter."

The New York City Charter lays out a series of design and funding details that officials must include for a capital project to be approved by the mayor.

Members of Queens Community Board 9, which voted unanimously against the Kew Gardens jail plan last year, previously accused the mayor's office of failing to meet those requirements in a Sept. 27 letter to the City Council.

The Kew Gardens Civic Association, which is helping spearhead the legal effort, sent a letter to homeowners Wednesday soliciting contributions to fund the lawsuit, pitching it as "an investment in preserving your home," according to a copy obtained by Patch.

A group of South Bronx residents is suing the city in a bid to block a new jail from coming to their neighborhood as part of Mayor Bill de Blasio’s larger efforts to shutter the Rikers Island prison complex.

The suit, filed Tuesday in Bronx Supreme Court on behalf of the Diego Beekman Mutual Housing Association and other parties, seeks to halt construction on a 19-story, 886-bed jail planned for the site of the NYPD’s tow pound in Mott Haven — a neighborhood located in the nation’s poorest congressional district.

It alleges the de Blasio administration and City Council broke the law by snubbing alternative sites for the jail, failed to reveal the true environmental impact of the project to residents and snubbed the entire public-review process.

“The Mayor and Council Speaker broke the law and rigged the process to saddle a low-income community of color with a jail, plain and simple,” said Arline Parks, CEO of Diego Beekman Mutual Housing Association, which represents 5,000 residents in 38 buildings.

The city’s plan to construct a jail in Chinatown routinely neglected community input, including
Native Americans concerned about the possibility of large amounts of human remains in the area of the planned facility, a lawsuit set to be filed Friday claims.

The suit, which will be filed by Neighbors United Below Canal and American Indian Community House, claims the city’s plan will cause “irreparable damage to indigenous lands” and that the city failed to adequately reach out to neighborhood organizations and affected residents.

“The work and outreach that’s gone into this lawsuit is work the city should have been doing in the first place," said Jan Lee, who runs Neighbors United Below Canal. “It’s a robust case because we did meaningful outreach to our neighbors and came to realize just how deeply negligent the mayor’s plan was from the very beginning.”

The suit, which was shared with the Daily News, also alleges the city violated its own land use procedure, in which the City Council must approve projects before they can be built, by changing the proposed location of the Manhattan facility from 80 Centre St. to 124-125 White St. at the last minute. The White St. location is where the borough’s current jail , known as “The Tombs,” stands.

“Although the community was not pleased with the initial proposal to build a new jail structure at 80 Centre Street, the change of location was even worse,” a draft of the lawsuit reads, noting that the new plan puts the jail near residences, small retailers and a senior center.

The city also identified that there is a “moderate to high” possibility of Native American remains at the site of the proposed Chinatown jail, but still failed to reach out to the indigenous community, neighborhood advocate Christopher Marte told the Daily News.
Posted by JQ LLC at 5:35 AM

Good for them. What party will they vote for in November?

You can battle, but you will lose. You are only a Civic group.

Are we going to get a refund for the millions we spent on that brand new parking lot they now want to demolish and build the prison over?

I think the Queens Borough president has say in zoning. Vote for James Quinn. He is against the closing of rikers, and against community jails. If he gets elected, it would send a message to all these stupid pols that they better pay attention to the silent majority.

If SOuth Bronx doesn't want prisons nearby, that pretty much proves this is a bad idea. I mean Bla-Blasio said he wanted to put the prisoners near their loved ones. Of ocurse he could just put a hotel on Rikers.

Tony Seminario used to fish on Rikers.
So, teach a prisoner to fish.
Stay on Rikers.