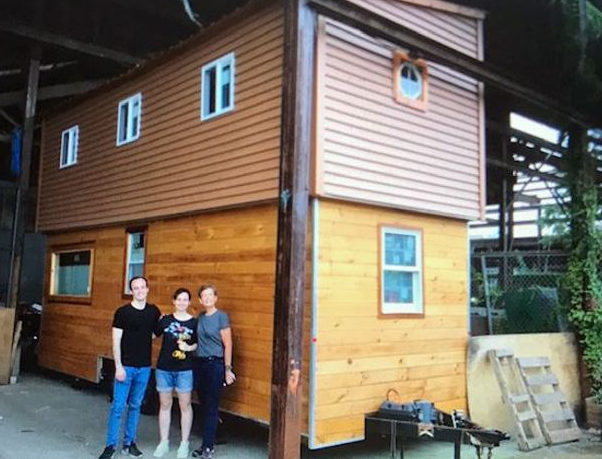 “It has a stand-up shower, compost toilet, full-size refrigerator and a second-story high enough to stand in,” said Saat, a 57-year-old Turkish immigrant who worked on his 300-square-foot home in Astoria before moving it to a Long Island City industrial warehouse last year.

“It took my family more than a year to build,” he said. “I have a construction background and watched a lot of YouTube videos. God bless the internet.”

Tom Saat sits atop the roof of tiny house he built. Photo: Courtesy of the Saat family


Saat, who runs a business as a general contractor, is among those excited about the de Blasio administration’s bid to boost affordable housing by easing restrictions on backyard dwellings and basement apartments. The mayor revealed the proposal last week ahead of his State of the City address at the American Museum of Natural History.

“People should be allowed to put tiny houses in their backyard — or someone else’s backyard with their permission,” said Saat, who actually lives in Lower Manhattan. “And there should be lots assigned for tiny-house owners.”

Saat’s eight-foot-wide, 23.5-foot long house on wheels, with an electronic, retractable second floor, cost roughly $50,000 to build. He and his family eventually moved it out of an industrial warehouse in Long Island City on Thanksgiving Day last year and headed to a more affordable lot upstate in Stormville, N.Y.

Saat conceded that his little home, while cozy, does not comply with city building codes in its current state: The 6.5-foot second-story ceiling does not meet the required minimum clearance, for instance, and the bathroom uses removable plastic bags for waste.

“Number one goes into a separate container which can include a small chlorine tablet inside for keeping it clean, germ- and odor-free,” he said. “Number two goes into the plastic bag area and sawdust, or other natural dust made from coconut shell, is used to cover number two each time it is used. Once or twice a month, this bag is replaced.”


If the city were to ease restrictions, Saat said, he would consider offering classes on building tiny homes in the boroughs. He had planned to offer classes in Queens before heading north.

De Blasio administration officials predict at least 10,000 additional units, including newly approved basement apartments and tiny backyard homes, could be added to the city within the next 10 years under the proposed changes, which the City Council must approve.

I think it's necessary to also post the conclusion of this article, which throws this ridiculous (and gross idea) into the growing dung heap of de Blasio's housing policies:

Other architects, however, remained a bit skeptical.

Lorena del Río, an assistant professor of architecture at The Cooper Union who has worked on affordable housing in Madrid, said, “It’s not going to resolve the bigger problem. Affordable housing should have even higher standards in terms of design so that people don’t end up living in a closet.”

The solution to the city’s housing crunch, she suggested, involved more alliances between the public and private sectors — and the “political will” to regulate housing prices.

“That is the future of affordable housing,” she said. “Not tiny houses.”

Not only should people not end up living in a closet, but people shouldn't end up shitting in plastic bags every day.
Posted by JQ LLC at 5:07 AM

When my parents couldn’t afford a bigger place in the city they packed up and moved to Long Island and commuted to work. The world is a big place, not everyone can live in the same place all at once.

This is total BS it should not happen !

Jam 'em in Baby! Keep 'em from moving west and destroying our environment.

Go ahead and destroy every last blade of grass in NYC. Pack dem people in cheek to cheek. See how physically and mentally well people stay under such conditions. And think of the strain on the already inadequate infrastructure. See how DumblASSio speeds the total destruction of NYC--wall to wall people, protecting hordes of illegals sucking down your tax dollars, commie SJW schools chancellor using the public schools to indoctrinate your kids as new little commies--ignorant of the 3 R's, but able to quote you Bernie crap. It's already impossible to drive more than 10 mph in the outer boroughs and impossible to find parking spaces. Just wait until people are packed into every crevice. And what about facilitating the spread of disease in such close quarters?

Small houses in backyards-->an express lane to the highway from hell.

Dear God in heaven. The future is glass towers and shanty towns.

This actually seems super-cool; heck, that mini-house is nicer looking than most of the Queens Crap getting built these days. All that's missing is a sewer hookup, which legalization would allow.

Maybe this will replace the GLENDALE Men's shelter.

People shouldn't be shitting in plastic bags? Of course they shouldn't, but maybe we can get the subway homeless to do that? That would be preferable to shitting right next to me. In 5 years, we're gonna need the plastic bag system.

How far underground can these be installed?

> It's already impossible to drive more than 10 mph in the outer boroughs and impossible to find parking spaces. Just wait until people are packed into every crevice.