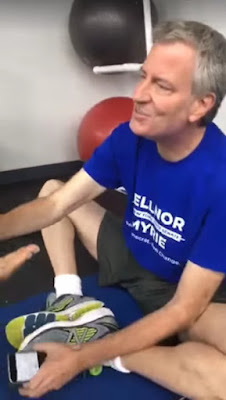 
Mayor de Blasio has joined the 21st century — and found a way to hide his communications.

Hizzoner joined encrypted messaging app Signal over the weekend. The tech lets users send disappearing messages to one another and protects the content with encryption.

So if the mayor wanted to discuss something controversial with an aide or campaign contributor, all he’d have to do is time his messages to disappear after a few minutes and the public would never know.

“We don’t think that any elected official should be using an app that does not preserve communications that are subject to the Freedom of Information Law and the records archiving laws,” he said.


Under state law, “any information kept, held, filed, produced or reproduced by, with or for an agency ... in any physical form whatsoever” is subject to FOIL requests requiring agencies including the mayor’s office to turn over the info.

“We don’t see how it’s possible to use that kind of app and be in compliance with those laws,” Camarda said of Signal.

This is SOP for our secretive and above all laws mayor. I tend to think he's been pulling this craven stunt for years during his daily Park Slope Y workout routine.
Posted by JQ LLC at 7:29 AM

What is he hiding ?

Unsurprising, but this is also what burner phones are for, or having underlings relay your messages for you. BdB is taking his cues from Trump, but executing with a fair deal more competency.

"BdB is taking his cues from Trump" We know TommyR, we know.... #TDS

"BdB is taking his cues from Trump"
I love it when POTUS 45 get to you Tommy R !
You have to say these things because you have no choice :-D

For once the mayor has the right idea, even if he's using for the wrong reasons.

Americans need to start waking up and using programs like Signal. So many apps record everything you say permanently, providing it to their marketing department, to third parties who want to monetize your personal life, and to foreign governments who most definitely don't have your best interests at heart.

But this is an elected official using it for communications covered by FOIL, which is morally wrong and potentially illegal.

"I love it when POTUS 45 get to you Tommy R !
You have to say these things because you have no choice :-D"

Jeez, why don't you ask Putin to spring for better English lessons, huh? Must be great a gig, sitting on the keyboard all day and looking for Trump comments to blather on about.

TommyR,I think you spent too much time cleaning up Chernobyl 😨

utilkizing is not a valid word, and implies pretentious illiteracy

I am going to assume that's a typo instead of accusing you of illiteracy also.

Perhaps TommyR spent too much time in College and got brainwashed ?
Professors use the lectern to spout liberal propaganda and anti-American sentiment.
Most of our young people are indoctrinated.They are transformed into leftists and almost always become less kind, less happy, and more angry.