Mayor de Blasio and NYC's First Lady will only pay less than $9,000 in property taxes for their two homes next year 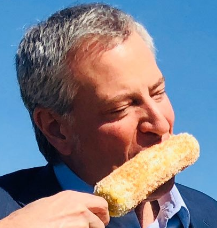 A sneak peek at Mayor Bill de Blasio's anticipated property taxes next year has hizzoner's online critics wondering: "How is it that @NYCMayor only pays $4493.33 on a $1.76 Million dollar Park Slope home, when other NY'ers are taxed through the roof?"

Twitter user @odonnell_r posed this question along with a photo of de Blasio's and his wife Chirlane McCray's notice of property tax for their 11th Street property. The Jan. 15 notice and the amount has been confirmed by Patch through public Department of Finance record


But it doesn't tell the whole story — a twisty tale of multiple homes and New York City's antiquated tax system that many, including the mayor himself, have criticized as unfair and due for change.

For one, it's not de Blasio's and McCray's only high-dollar Park Slope property on 11th Street — they own a $1.88 million home also with an estimated $4,493.33 in upcoming taxes.
That's about $9,000 in expected taxes on just shy of $4 million worth of property, for the math-averse.

The homes' taxes at that time about $3,600 each, according to records.

So when the mayor received notices dated Jan. 15, 2020 about his expected upcoming property taxes he actually learned his taxes would go up.

"I pay double that on an attached house in queens. Doubled since this fool took office. This has to change and fast," wrote @Onivasa316.
Posted by JQ LLC at 5:46 AM

We need to recall him now. The damage he is doing will take years to fix if ever !

Little two bedroom coops in Oakland Gardens pay $5500 per year in property taxes. And what services do we have? No subway service, bus service about to be cut, and schools are getting worse.

You folks didn't get over liberal Lindsay until Rudy turned the town around. Your looking at 25 years or more. Keep voting democrat.

I wish he'd be impeached

As Mel Brooks would say - It's good to be the King

The mayor did not put the property tax code in place.
It is ridiculous to somehow imply he is doing something wrong.

We have a president that literally makes billions and pays no income taxes.

Maybe he should give a lecture on how he does this??? I sure would like to know.

A Tale of Two Cities ! I pay almost what this idiot dose on my small two bedroom co-op in Bayside.

"The mayor did not put the property tax code in place.
It is ridiculous to somehow imply he is doing something wrong."

No, but he certainly has no incentive to fix it, now does he?

Masturbayor Billy Blog Villain is just Big Bird with Turd in His Gurd. It seems the only thing he can get right without stepping on his member is filling up his bank account. Next Powerpoint SLide Please.

>The houses gained attention in 2017 when one went up for rent to nonsmokers without pets at $1,825 a month, Politico reported.

That's less that the rent for most apartments. I'm glad he's passing his savings along.

I will be paying $6000 in property taxes in Northeast queens has shelters, group homes and a bunch of drug rehab people walking around. Crime is up and trash ever where. Sick and tired of paying for these services in my area where houses are half a million to almost a million. Will be moving in the next 2 years to Long Island. I would rather pay a lot of taxes and live in peace.

My parents property tax went up to 7000 dollars and they own a small 2 bedroom attached house in bayside that technically should not be worth more than 300k but due to foreign investors, the price of their little house is 600k so their taxes are now 7000 per year. It literally went up like 2000 dollars in the last 5 years. Its ridiculous.

Taxes and more Taxes passed by the NYC Blue Demorats !

”The mayor did not put the property tax code in place.
It is ridiculous to somehow imply he is doing something wrong.“

He didn’t start it, but fixing it was part of his campaign to fix inequality in “the tale of two cities”. So he should be doing something about it. BECAUSE HE SAID HE WOULD. Why is that ridiculous?

This guy made a lot of promises when he was running. I could tell that he was full of crap so I never supported him, but for the people who actually believed him, he has failed to deliver on most things. Quality of life is objectively worse for everyone.

For those of you still voting Democrat,

take a close look at just how badly this idiot has performed his job.
-Taxes are up
-crime is up
-homelessness is up
-school performance continues to suck with an average of 40% of students proficient in basic Math and English.
-Public housing taken over by the Feds due to lying incompetence
...and the list goes on.

Next time you get to vote, try looking at the other columns to the Right,
your children and grand-children will thank you.

You simply refuse to accept progress, you nazi!