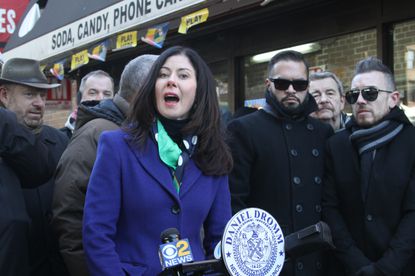 Three current and former City Council members raked in a whopping total of $1,897,914 in “public matching funds” for their campaigns, the New York York City Campaign Finance Board announced Thursday.

They received $8 in taxpayer funding for every dollar they raised on their own. The candidates had to get at least 100 contributions from Queens residents and raise at least $44,614.
Posted by JQ LLC at 7:31 AM

Note to politicians. being flanked on the podium by angry looking dudes in shades is never a good look. Was there not a single kind looking old lady or innocent child available for the photo?

You don't even need this make believe Boro President office, New Yorker's. Get real. Start circulating a petition, letters, phone calls, emails to your City Council forcing the end of this joke.

This trio of feckless hedgehogs are a collective waste of skin——depleting the earth of precious oxygen (out of too many 'OTHER' cradle-to-grave, government grandstanding, 'do nothing, know nothing,' DemonRat parasites to name in this missive)! After all, pigs that feed at the same public trough can't smell their own putrid STENCH!

ALAS, the FOISTED class warfare (and, CLASSISM) of the 1% has been successful——basically because the 99% refuse to do anything about it, and they prefer to chase the red herrings that the 1% provides (and, FOISTS), with a vengeful impunity that remains unprecedented, to date——and, the ever languishing public be eternally duped, bilked, scammed and damned!

My dearest possums, the Free Market does not exist in New York City, New York State, nationally AND the world-at-large! Anyone who has got anything is THERE because they can help the puppeteers and monstrously failed political scourges (NOT public servants) of New York City.

How about the other candidates? Did any of them get matching funds?

Desperately trying to find the least objectionable choice. What an awful crew.

Jim Quinn for Borough President. He is the only one that supports keeping Rikers on Rikers. Crowley, the credit taker, and Donovan, the do nothing, are career Political hacks. They say what you want to hear, and the do nothing when you need them to work.

You make me dizzy, Miss Lizzy !