Felony crimes made big jumps this year in the "Safest Big City", especially in the "World's Borough" 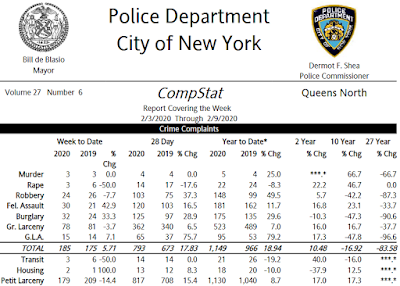 New York City experienced its worst January for serious crime in five years, according to NYPD data set for release Tuesday and expected to show an ongoing spike that department officials attribute to the state's new bail reform law.


The latest Compstat data through Feb. 2, shows that total overall serious felonies — such as homicide, burglary, robbery and auto theft — are up 16.4% over the same period in 2019. The increase is 6% when compared to 2015, the data shows.


After years of steady declines in crime, the city has seen double digit increases in burglaries, grand larcenies and auto theft — the latter up 70% over 2019 — since Jan. 1. Robberies and felonious assaults saw single digit increases. A positive trend within the data shows homicides down nearly 20% since the same period last year and a decrease in rapes by 18%, according to the latest data.

In January, serious felonies citywide continued to rise throughout the month. NYPD Commissioner Dermot Shea is scheduled to talk about the overall upward trend Tuesday during his monthly crime briefing. He is again expected to call on the legislature in Albany to tinker with the bail law, which took effect Jan. 1. The new law eliminates bail for most nonviolent crimes.

Crime across the city and in the borough of Queens jumped significantly in the first month of 2020 — which top NYPD brass attributes to bail reform.


There were 758 serious crimes from Jan. 1 through Jan. 26, 2020 in Queens North; up from 629 during the same period in 2019, according to NYPD data.
Major crimes climbed 31 percent for the same 26-day period from the year prior in Patrol Borough


Days before a new civilian patrol was set to begin in the neighborhood, a 60-year-old man was robbed and severely beaten in broad daylight in the Cityline section of Ozone Park that borders on Brooklyn.

Graphic photos of the victim, Shahab Uddin, bleeding profusely from the face, posted on Facebook sparked residents to call an emergency meeting of the Ozone Park Residents Block Association this week to deal with what they are characterizing as a neighborhood “crime wave.”

“The brutality of this crime really got to me,” Sam Esposito, head of the OPRBA and a former police officer, told the Chronicle.


Uddin was walking home from Liberty Avenue on 76th Street at around 11 a.m. Sunday when he was attacked from behind by a lone assailant who beat him and stole his cell phone and wallet, his family said.


He has been hospitalized since then, unconscious with severe facial wounds and bruises, according to Esposito.


It is the second time in three months someone in the largely Bangladeshi community near the border with Brooklyn has been badly beaten in an unprovoked attack.


In November, a man on his way to work was set upon by a group of young men at the elevated A-train station at Liberty Avenue and 80th Street, a few blocks from the site of Sunday’s assault.


That attack spawned a neighborhood rally that drew several hundred people to protest what was called poor police coverage in a crime-prone section of Ozone Park.


Crime has “been going up over the last 18 months and we knew it,” said Esposito.


The most recent crime stats seem to bear him out.

Although the bail reform laws are a major factor in this precipitous rise in crime, the New Bad Days have been here for quite some time.

I don't know why everyone is getting so worked up over this. The city overwhelmingly voted for politicians who campaigned on suppressing the police, and giving criminals/ illegals more rights. Why is there now an issue when crime goes up? This is what most of the city wants.

If election day was tomorrow most would re elect each and every politician who enacted this law.

It’s not bail reform, it’s the entire CJ reform. Remember arresting/prosecuting/sentencing those who commit crimes is racist. This is the city that everyone wanted. Enjoy.

Ozone Park is full of illegals Mike Miller want the State Police, better if would get ICE in there
, oops no dice sanctuary city

Friends and family get upset at me, when they complain about stuff like this and I reply with “So, who’d you vote for?”

New York Post Story -
The Trump administration is deploying special tactical officers from US Customs and Border Patrol to sanctuary cities, including New York, in order to assist ICE with cracking down on undocumented immigrants, officials and law enforcement sources said Friday.

We are beginning to see the end of mindless knee jerk liberalism.

Everyone should read Anonymous #1 ... and read it again!!

I wouldn't book a trip to NYC unless I was an Illegal Alien! Oh! And a felon!

To Anonymous #3: Mike Miller is a spineless, useless blob of metastasized fat cells who devalues honesty itself! The REAL criminal who State Police should be locking up is Fathead Miller himself. HE, and his entirely 'Useful Idiot' staff are a collective waste of skin, depleting the earth of precious oxygen!

❝If you do not take an interest in the affairs of your government, then you are doomed to live under the rule of fools.❞ ——Plato

Where does this guy find the quotes?

Mayor Bill de Blasio’s latest nomination to the MTA board is Convicted FALN leader Oscar Lopez Rivera ! And you wonder why crime is going up in NYC ! The Far Left is destroying us from within !!!

What does a terrorist from San Juan, Puerto Rico know about trains, mechanical & electrical engineering, block signaling, computers and electronics?
Nobody on that board should be there without degrees and hands on experience in those fields.
deBlasio must be the stupidest mayor in this country's history including that liberal shithole called California

Crime in Maspeth up big time....4 muggings inside of 14 days.

And did anyone see the video of last nights rampage/brawl at Maspeth Pizza House on the Maspeth Citizens app???

No, his appointment is the apparatchik who decided that a terrorist who murdered New Yorkers would be a fitting marshal for a NYC parade.
Rivera might actually be a better choice. Blow it all up.

Problem's crossing the red lights by the Queensburough bridge tonight, these squeegee men with what looked like broken off windshield wiper blades, buckets, rags and newspaper were fighting over lanes of traffic and spitting at each other.

Which is why we need to elect James Quinn for Borough President.
He does not support the closing of Rikers.
He warned us that the bail reforms are going to make the public unsafe.
He is for Law and Order.

We need to send a message to the pols that there are consequences for your irresponsible choices.

Having just returned from Japan. The difference btw the two Cities is, well, a Tale of Two Cities level of difference, and actually has very little to do with racial homogeneity and much more to do with a somewhat higher levels of civic engagement but mor-eso, expectations for standards of service.

I don't know, Tommy! You're pretty vague there. Actually, Japan is a homogeneous country, in totality. Racially, for sure. I can't understand why you apologists go away to these utopian cities and then even bother to return to New York. New York is definitely in a bad way, but if the people who live in NYC would break out of their voting pattern, they could make changes. Maybe they like it the way it is!

Leave half a car space in front of you and the Squeegees won't approach for fear of being run over. (Lesson from the 1980s).

In Tokyo, the homeless sleeping on park benches manage to all disappear at 6am

The Giuliani Pataki margin of victory left because of 9/11 and the financial crisis.
New residents used to register to vote for school board elections.
You need to get your new neighbors registered to vote.
If they chose to live in your neighborhood they will vote like you.
1990 turnout was mediocre 1/3 now abysmal 1/7.

Read a book called "new lies for the old." Then you will understand why this is happening. It's almost complete maybe we have another 10 years if we are lucky.