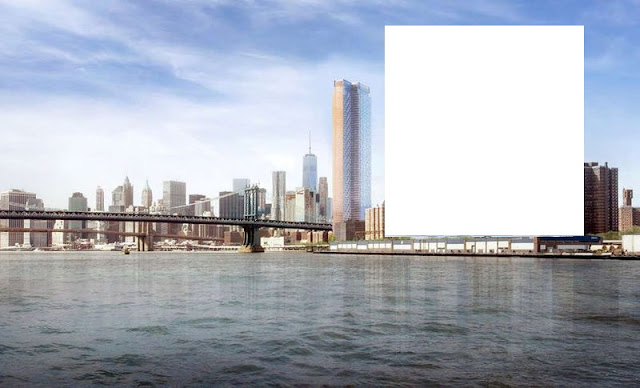 The L in LES doesn’t stand for luxury.

A state judge barred a developer from building four high-rise towers that had been set to offer hundreds of pricey apartments.

Activists had sued the city, which approved the project on the East River between the Manhattan and Williamsburg Bridges in 2016. The proposed project included 2,800 units, and one of the towers would have been more than 1,000 feet tall.

“It would drive up the rent and more people would be facing displacement,” said Zishun Ning, an organizer for the Chinese Staff and Workers’ Association, one of the groups that sued the city.

He singled out Mayor de Blasio, who expected the project to include affordable units and said in 2018, “The legalities made quite clear that this development could go forward."

“With this decision, we’re very excited to prove that the city is wrong, Mayor de Blasio is wrong,” Ning told the Daily News. “He’s with the luxury developers. He represents their interests.”

De Blasio declined to comment on the suit. A city Law Department spokesman said, “We are evaluating next steps including whether to appeal this decision.”

Ning hopes the developer will go back to the drawing board and come up with a plan more in keeping with the feel of the nabe, which is full of walkups that have long been home to immigrants.

Too bad Alicia Glen was not around to see this, maybe she lit a candle for her bestie who was behind this tower pestilence. Bet current HPD commissioner Vicki Been has a lot of explaining to Glen's old employer Goldman Sachs.
Posted by JQ LLC at 8:18 PM

I've written this before and repeated it constantly: the City actually has a long and successful history of building affordable housing for the middle and working classes. Not just the big projects like Mitchell-Lama but smaller, privately developed blocks everywhere from Maspeth to Ridgewood and all throughout the other outer boroughs (but especially Queens). It's a bunch of crock that all new housing must be luxury ("market") rate first, with a few paltry units shoved in on the margins that are barely considered affordable by anyone with a working brain. That's BdB's horseshit he's been spewing for years. Glad these guys scored a small victory. The developers will cry, boohoo.

Like the links I provided in my comment, de Blasio was the figurehead puppet and Alicia Glen was the alpha dog pulling the strings. She controlled three city housing and planning depts as deputy mayor and all these plans were straight from her scheming for Goldman Sachs.

She quit her job around this time last year and it's obvious she knew these projects were going to get slaughtered by the masses and in the courts.

But guess what, she has designs for mayor now. That's what we all need, Femme Bloomberg.

Row houses worked before and can work again if given a chance.

This would have never happened in Queens - the press would have given a sentence for the two or three that were against it while the rest silent and heads down, were counting their square footage with $$$$$$$$$$$$$$$$$ dancing in their eyes.