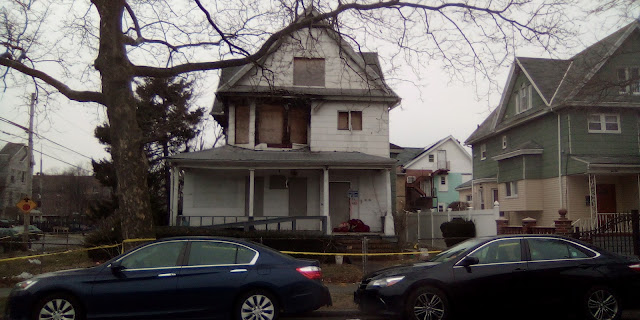 Police investigating the sad death of a homeless man found on the front porch of a condemned Queens house have slapped trespass charges on three people they found inside the run-down abode.


Officers responding to a call Sunday morning found Pawandeep Singh, 27, dead in front of the house, an ugly and bloody gash across his head. The city medical examiner is still trying to determine an exact cause of death.

Inside the house were Jay Daownanan, 25, Vijendar Brijmohan, 22, and a 17-year-old girl, all believed to be homeless. All three were charged with trespassing.Investigators currently don’t believe they’re involved with Singh’s death, police sources said.

Police spotted blood on a rear window of the house on Lefferts Blvd. by 95th Ave. in South Richmond Hill.

Daownanan, who had a cut on his arm, has no previous arrest record. Brijmohan has previous arrests for resisting arrest, petty larceny and unauthorized use of vehicle.

A fire ripped ripped through the building in 2016, and the city then issued a full vacate order because officials feared it suffered structural damages.

Neighbors Monday said the house had been empty for at least 10 years and that high school students routinely hang out there to drink or deal drugs.

“A lot of people complain to police," said Gurdeep Singh, 52. "A lot of times police come, look around and leave. A lot of drugs going on. Girls, boys, 10 o’clock at night, in the morning, people coming from school.
Posted by JQ LLC at 9:04 PM

Another once beautiful house turned to shit due to "certain people".

I thought the Sikhs took care of their own, altho Mr Singh is fairly common name for non Sikhs.

The real fault of the city is in not condemning and demolishing fire damaged dumps like that.

Tear it down and things like this won't happen.

My old Nabe so sorry to see what has become of it today.
It was such a wonderful place to live in the 1950's.