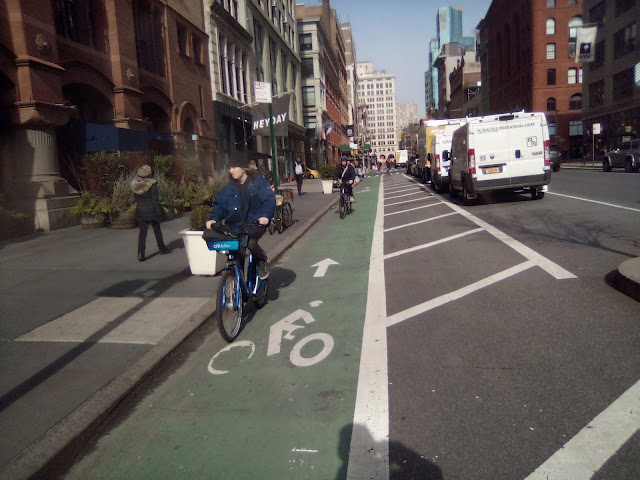 
Citi Bike riders are about to get a boost.

The bike-sharing company will roll out a new line of e-bikes Wednesday, 10 months after its entire fleet of electric two-wheelers was pulled from service after a braking issue catapulted several riders over the handlebars and sent them to the hospital.

The new e-bikes, which give riders a little extra pickup when they pedal, were designed specifically for New York City, said Citi Bike spokesman Cory Epstein. Unlike the old models, they have a motor on the back wheel, instead of the front, and have drum brakes that do not lock up.


Citi Bike’s old e-bikes had “roller brakes” that did not have power modulators, skirting the brake manufacturer’s specifications.

The new rides appear to be safer. During a test ride Tuesday, a Daily News reporter slammed an e-bike’s front brake at top speed. The bike came to a comfortable stop instead of throwing its rider to kingdom come.

As I documented for at least a year on social media with #EbikesAreMotorcycles, the safety issue isn't just with these bikes but the people that use them
Posted by JQ LLC at 7:05 AM

There should be a lot more results than that.

NYC is an Aquapolis. I want to see boatsharing, so I can go aqround by boat!

Looks like they are riding in the wrong direction at least as the arrow is pointing. Should be a law against that don't you think?

These Electric "Bikes" are not safe !
60-year-old woman dies after being hit by e-scooter in Harlem
https://nypost.com/2020/02/20/60-year-old-woman-dies-after-being-hit-by-e-scooter-in-harlem/

That was not an e-bike, it was a vespa like mini scooter. They are more like toys than vehicles, and they are illegal.

Citbike's allowed to run their e-bikes because of a glaring loophole that they are pedal-assist instead of throttle bikes like the ones delivery guys use. I think a lot of lobbying was involved by Lyft and Motivate (the partners behind citibike) to state officials to permit these things on the streets.