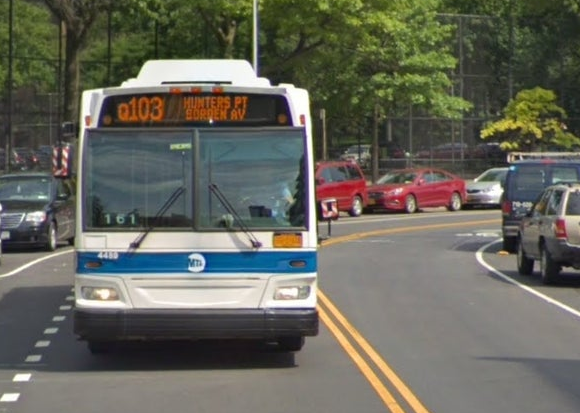 
The MTA's proposal to eliminate the Q103 bus route along Vernon Boulevard has riled Astoria residents, who say the line is needed now more than ever.


Under the transportation authority's preliminary proposal to entirely redraw the Queens bus map, released Dec. 31, the Q103's north-south route along the Astoria waterfront would be cut.
As a replacement, the MTA's plan would shift those riders to a new version of the Q69 bus, which would still run along 21st Street — about 0.4 miles east of Vernon Boulevard — but continue further into Long Island City.

MTA officials working on the redesign said their proposal is only a draft and that the Q103 elimination isn't a done deal, but the mere suggestion had locals up in arms at two recent meetings on the plan.


At an MTA presentation on the redesign plan Friday in Astoria, nearly all of the 30-some attendees came to address the Q103 proposal: When one planner leading the presentation asked who had a question that wasn't about the Q103, the audience roared with laughter.

Actually, someone should have asked if this was a way to open up the road for the BQX.

You keep the Q103, and you save the city $2 billion. You don't need to be a finance whiz to figure this shit out.

Ms Hackett is right on the money with this one. If this administration has shown us anything, it’s that their only way to implement their cockamamie schemes is through bait and switch.

The woman was very perceptive. The scenario sounds like it is being pushed by real estate interests. Especially the nonsensical idea that the area could lose the same transportation that it will soon be described as desperately needing.

Get in touch with the Old Astoria Neighborhood Association - Richard Khazumi.