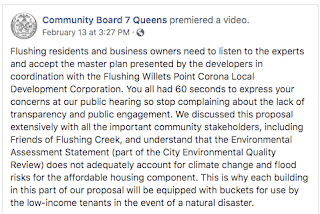 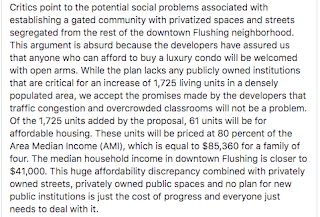 I know. I put satire there.

I saw this on twitter. I wasn't fooled by this one.

Cb7 board member Chuck Apelian is a consultant for the developer. It may as well be real because he will make sure it all goes through so he can collect his bribe money.

Hahaha...brilliant. Now let crop up here and there and see who notices.

Private streets / gated community? Is that the proposal in reality?

Sadly,
this satire is not far from the truth in CB14 (Rockaway),
except that in that case, it's the Councilman and Mayor that are telling the residents to go eat sand.
Remember, community boards are only "advisory" so when they go against the will of the politicians, they become meaningless.

The Peninsula Hospital Project plans for 2200 units of "affordable" housing, which in that area of Far Rockaway translates into 2200 units of low-income housing due to the depressed AMI for this poor area.

When the Community Board voted down the proposal due to the out of proportion scale, lack of schools, infrastructure and transportation options (cited directly in the city's own Environmental Impact Study), the councilman (who previously worked for the developer; Arker) and his colleagues on the city council steamrolled ahead with the plan.

Basically, they said "screw you" with your school concerns and lack of transportation issues, we're moving ahead regardless of community input.

The kicker; that councilman is probably going to be the next Borough President;
Donovan Richards

...keep voting Democrat though, because things are working out so great in our once great city.