Broker fees begone not yet 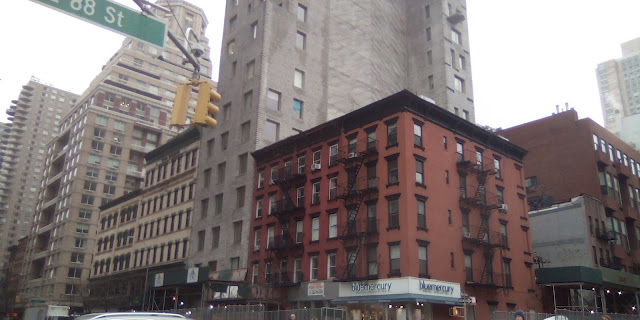 An Albany judge on Monday issued a temporary restraining order halting the Empire State’s new lightning-rod rule that renters can no longer be charged broker’s fees.

The ruling by Justice Michael Mackey came after the influential Real Estate Board of New York and other industry honchos, including big-name brokerages like the The Corcoran Group and Sotheby’s Realty, filed a lawsuit against the Department of State on Monday.

The temporary ban means brokers can, for now, continue collecting hefty commissions from tenants when they rent a residence.

REBNY and the New York State Association of Realtors declared in a statement that it also means “that thousands of hardworking, honest real estate agents across New York State can do business in the same way they did prior to last week’s DOS memo without fear of discipline by the DOS.”
Posted by JQ LLC at 7:11 AM

Why should a tenant pay the fee for a landlord?

I agree Rob ! Why should a tenant pay the fee for a landlord ?

"Why should a tenant pay the fee for a landlord"

Because most landlords need the agent to weed the shitheads out and do the background checks. --and make the prospective tenants pay for that service.
If a landlord goes about things the wrong way they can get slapped with a discrimination lawsuit. The agent is the buffer.

The assholes and deadbeats avoid agents like the plague, most know they cant get through the background and income checks and simply move on in search for a sucker easy meat landlord.
Anyway usually BOTH the landlord and agent pay the agent one months rent, the system works and its 50/50 fair.

Am I missing something??? If you click on a broker's listing, and that broker shows you apartment, don't you pay first, last and broker's fee before you occupy? I always did that--when was it otherwise???.

"Because most landlords need the agent to weed the shitheads out and do the background checks. --and make the prospective tenants pay for that service.
If a landlord goes about things the wrong way they can get slapped with a discrimination lawsuit. The agent is the buffer"

I understand the point you are making here but, this is just shifting a typical cost of doing business from the one who hires the service to the customer and people are fed up with that.

I am a partner in multiple restaurant locations.

In the last two months we have:

Replaced a circulation pump in a roof water tower for a refrigeration system.

Two hot water heaters; one domestic the other a booster.

Replaced the controller and motor on a dumbwaiter.

Neon signs at three locations with a total cost of over $1400.

We don't get to pass this on to customers. it is a typical cost of doing business and staying legal.

Why should some f-ing landlord be privileged to dump these costs onto a tenant he'll be bleeding anyway.

Here's why the costs are passed on to tenants:
because the laws and the system have been set up over many years to leave the landlord holding the bag when there are crap tenants...and there are a lot of crap tenants in NYC!

Every time you hear of a crime or a domestic disturbance or a deranged lunatic, think to yourself; who has to deal with this person on a regular basis?

Yes, usually they are renters because most violent and erratic nutjobs aren't stable enough to sustain their own home in nyc and all that home ownership entails.

Just generalizing here but you understand what I'm saying.
One bad tenant who mugs people for a living, and who likely isn't a good paying prospect, can cause havoc on the finances of a typical small landlord.

The picture in this city is of a couple of Bloombergs or Lefraks owning everything when in reality it's thousands upon thousands of two and three family owners who get to deal with trash all the time.
Then they get the distinct honor of absorbing the brunt of misguided socialist programs like free housing for citizens of other nations and free healthcare for anyone and their aunt from a nation they never heard of or subsidized housing for deadbeats that just never understood how to hold a job responsibly or never wanted to.

Yes, property tax hikes are real, as are National Grid, Con Edison and LIPA rate increases, as are Water and Sewer increases, and Insurance cost increases.

Meanwhile people bitch that the renters are getting it bad.
Well at least renters can walk away.
Yes, I know that owners make a deal to take on problems when they buy a multi-family property. But that doesn't mean they can't take measures to protect themselves.
If you believe otherwise, then you're living in Sanders/Ocasio land where there's just no end to other people's money.


Harry Haller. I get your point here but, we are talking about a business NOT a private homeowner who rents a (hopefully safe) basement apt.

I have no issue with running background checks on prospective resident, but that is a cost of doing business.

The argument that high rents are based on taxes is frankly, specious. We could cut taxes to zero and most landlords would just pocket the difference. They hold the keys -literally and thus set the cost to residents.

The lack of affordable housing has created the worst homelessness crisis in modern history. For the first time in the city's history many residents are paying two or more weeks salary in rent and/or living in dormitory conditions.

High rent is the most often cited reason for young people leaving this city. You want to kill a city -turn it's residents into rent-refugees moving ever further out to afford a roof over their heads.

It affects us as business owners too. It is no surprise that business tails-off toward the end of the month. People are tapped out. I've long seen this pattern, but is much more pronounced in the last 8 or 9 years. I talk to the customers and it is always rent and food costs.

Leave the right-wing ideology out of this and look at what is happening. Greed is rotting out this city and real estate is at the core of it.

Study after study has shown that artificially holding rents down causes a shortage of affordable rental housing.
This is borne out by a basic understanding of economics where the law of supply and demand operates on an inverse relationship.

The higher the supply the lower the demand, and vice versa.

By placing an arbitrary hold on that mathematical curve you distort the market.
The only real way of addressing higher rent prices is to lower the demand by somehow decreasing the size of the population (good luck with that) or by physically creating more apartments. Something the city is loathe to do.

Instead, the city and state think that by restricting the ability of landlords to increase rents, they will somehow deal with the problem.
What happens according to those studies I mentioned is this;
people with connections or means (bribery) are able to get into good deals and stay there. They get their pick of rent stabilized apartments through side deals with supers or owners or just knowing the right people.

Those stabilized apartments become generational strongholds, not allowing people to move up as there is no incentive to leave for a better apartment while those available in limited housing stock continue to rise with competition.

Those younger people looking to move into an affordable "first apartment" are forced to look more and pay more for apartments at an ever rising "market rate".
Why?....because the laws of economics are ignored; supply is not increased significantly and demand has not been abated.
Only the government stepping in to mess things up big time.

I'll leave the politics in it, thank you very much, because it is exactly the democrat policies that have brought us here.
You need only look at our own city before DeBlasio and after to see what I'm saying. And yes, I was here for the Death Wish-Charles Bronson NYC as well so I know what I'm talking about.

I am 63 and remember the disastrous 1971 deregulation fiasco.

We also have the more recent iteration of this failed ideology, the 1997 attack on regulations that has resulted in over 340,000 truly being lost for bullshit ideology and greed.

THAT is among the myriad reasons we won't be turning our city or state back to the bastard gop anytime soon.

Yes of course, you know more than the science of economics because you have your own "studies" to prove it.
Well, I was here in NYC in the 1970's as well and I have my own experiences to go by which tell me that you are COMPLETELY wrong, because you ignore the other economic factors involved in the city's problems of the early 1970s.

Here's an actual scientific study report on the subject of rent stabilization/regulation and its effects on cities.
There are many of them, and guess what? They confirm the laws of economics which I was trying to explain to you but you choose to ignore because you have some sort of emotional attachment to the "D" line on the ballot.

Understand this; we have no time for idiotic democrat policies which are clearly ruining this city and have already ruined major cities across America;
San Francisco, Detroit, Baltimore just to name three.

The 1997 deregulation was part of the huge boost NYC received towards economic development. Thousands of stagnant housing units were improved upon or rebuilt with that deregulation, improving housing for thousands of new yorkers. Middle class workers, students and professionals flocked to this city to make a living. Not all gentrification is bad, unless you like crime and grime. Balance is what Deblasio should have been working on as he inherited a city running on all cylinders.

What didn't happen was the investment in actual housing built by the city for new yorkers. Instead of deblasio's idiotic plans to house people from other sovereign nations and give away freebees to thousands upon thousands of people flocking here from other states, he should have been investing in the development of actual housing for the middle class workers; those earning 40k-120k a year. Instead he lost nearly a billion to his wife's "mental health" initiative. Instead he lost nearly a billion in a failed "school renewal" program with no results. Instead he lost control of the public housing due to corruption in maintaining units for the poor. I could go on.

That is among the myriad reasons we shouldn't be turning our city or state back to the bastard democrats during the next election.

None of this will change your mind as I suspect you are one of those that is receiving a government subsidy of some sort. Nothing against subsidy's when needed.
But understand this; your lack of interest in anything but your own welfare (instead of society as a whole) is what causes cities to go to crap and you are a big part of why this city is heading there very quickly.