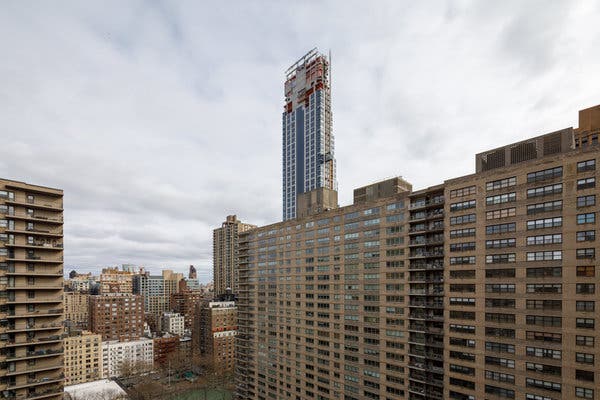 In an extraordinary ruling, a State Supreme Court judge has ordered the developers of a nearly completed 668-foot condo tower on the Upper West Side to remove as many as 20 or more floors from the top of the building.


The decision is a major victory for community groups who opposed the project on the grounds that the developers used a zoning loophole to create the tallest building on the West Side north of 61st Street. A lawyer representing the project said the developers would appeal the decision.

Justice W. Franc Perry ordered on Thursday that the Department of Buildings revoke the building permit for the tower at 200 Amsterdam Avenue near West 69th Street and remove all floors that exceed the zoning limit. Exactly how many floors might need to be deconstructed has yet to be determined, but under one interpretation of the law, the building might have to remove 20 floors or more from the 52-story tower to conform to the regulation.

“We’re elated,” said Olive Freud, the president of the Committee for Environmentally Sound Development, one of the community groups that brought the suit.

“The developers knew that they were building at their own peril,” said Richard D. Emery, a lawyer representing the community groups that challenged the project before the foundation was even completed. Mr. Emery said this decision sent a warning to other developers who proceed with construction in spite of pending litigation.

The question at the heart of the suit was whether the developers had abused zoning rules to justify the project’s size.

It is common for developers to purchase the unused development rights of adjacent buildings to add height and bulk to their project. But in this case opponents of the project argued that the developers, SJP Properties and Mitsui Fudosan America, created a “gerrymandered,” highly unusual 39-sided zoning lot to take advantage of the development rights from a number of tenuously connected lots. Without this technique, the tower might have been little more than 20 stories tall, instead of the nearly finished 52-story tower that now stands.

The decision also sets an important precedent, said Elizabeth Goldstein, the president of the Municipal Art Society of New York, one of the advocacy groups that brought the suit against the project.

“The way this zoning lot was constructed has been invalidated, and that is extremely important,” Ms. Goldstein said, adding that the decision would deter other developers from attempting similar strategies.

Scott Mollen, a lawyer with the firm Herrick, Feinstein, which is representing the project, said the ruling contradicted earlier decisions from the Department of Buildings and the Board of Standards and Appeals that were based on a long-established zoning interpretation. SJP, one of the developers, said they would “appeal this decision vigorously.”
Posted by JQ LLC at 10:22 PM

What a difference between Queens and Manhattan.

Close a pizza parlor and there is the wailing and threats to move.

Tear down am old house, or get abused by a developer, and you get ignored by every level of authority if you dare step out of line - civic, board, or official.

Since no one understands a hint of civics there is nothing you can do about it.

If the existing zoning allowed it and DoB approved it, what right did this judge have to rule against the tower? Should the developer go after DoB and City Planning for financial damages? I guess this judge wanted to be welcomed at the galas at the Municipal Arts Society.

Actually in 2018, the Department of Buildings sent a letter stating that they had made a mistake. The builder continued to build at his own peril.

Nothing will happen, the tower owners will claim hardship, threaten massive lawsuits and get their way. Others will copy the tactic.
Where was enforcement when this ugly piece shit was going up so many floors?
Shit from the Troggs neck bridge you can no longer make out the Empire State Building. Its buried in these spiky stupid looking towers. You think your looking at the skyline of Singapore.

God help small home owners and this country if Bloomberg and Clinton get in.
--And if Clinton has Bloomberg knocked off she will be president.
We have the pro socialist Millennials and stupid voters to make it happen.
I'm wondering how long before the developer locusts with "bag cash" get hold of the manufacturing zoned area of Maspeth.

Couldn't the developer request a zoning change from the City Council? Councilmembers almost always give in to developers requests.

Not a zoning issue ... DOB acknowledged that they accepted Partial Tax Lots submitted by the developer for air rights instead of Complete Tax Lots. Extell has continued to build despite the determination of DOB in 2018 that DOB had been in error in accepting those Partial tax lots.

Good day for Mel Brooks - We just snip the tip