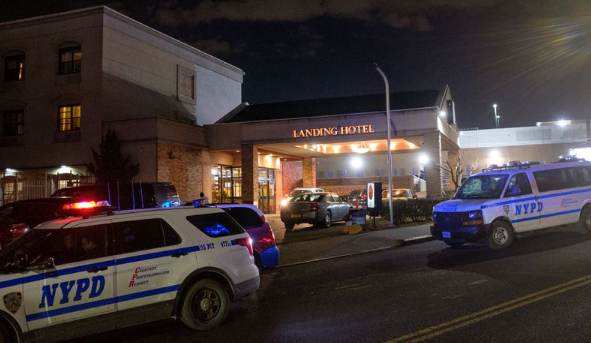 
Authorities are investigating the deaths of 2-month old twins who were staying with their family in a city homeless shelter, police said Friday.

Emergency responders found the twins, a boy and a girl, unconscious around 3 p.m. inside the lobby of the Landing, a Queens hotel that doubles as a city-funded family shelter.

Medics rushed them to Elmhurst Hospital Center where they were pronounced dead.

The babies’ father told cops he put the children down for a nap earlier in the day, but found them lifeless when he went to check on them.

Cops were questioning the father Friday. No charges have been filed.

“This is a heartbreaking tragedy. We offer our condolences to the family and will provide them with any and all support that we can during this difficult time," said Isaac McGinn, a spokesman for the city Department of Social Services, which is responsible for the shelter system.
Posted by JQ LLC at 9:14 PM

No comments ?
People care more about their beer (Neir’s Tavern) than children.

I'm am stunned to anon 1

The parents weren't charged either. Never heard on anything like a couple babies dying and no one is accountable for it. Something strange is going on there.

more from this journalistic nugget. father escorted out of the shelter. ah-ha