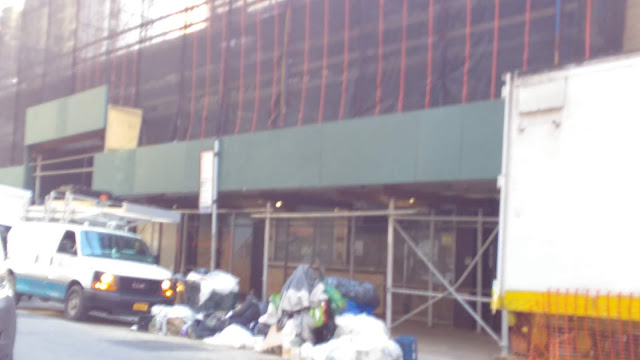 
The five-star Lotte New York Palace, featured on “Gossip Girl,” beckons guests and selfie-takers with an Instagram-ready courtyard, ringed by a mansion-like 19th century brownstone at the base of a modern hotel tower.

But what visitors may not know is that months ago, a city building inspector flagged the Madison Avenue property’s owner, the Archdiocese of New York, for failing to put up a sidewalk shed or other measures to protect passersby from a facade deemed dangerous.

The Palace is one of more than 300 buildings citywide that have open violations in city Department of Buildings records for not putting protections in place to shield passersby in the event a piece of facade crumbles or collapses following a failed inspection.

The risks of deteriorating materials dozens of feet above ground came into tragic view last month, when architect Erica Tishman was killed near Times Square by a piece of terra cotta that broke free from a building and plummeted.

The Department of Buildings swiftly announced it would inspect 1,331 buildings whose mandatory every-five-year inspections had found their facades unsafe, “to determine if they required additional pedestrian protections.”

Of those, 220 lacked such protections and would be issued violations requiring them to put up barriers to falling objects, according to the DOB. The agency declined to identify the buildings while enforcement actions are ongoing, and no such violations appeared in public records as of Tuesday.

Admin. note: There is no city Broken Facades program, I just made it up. Although they are free to use it as long as they stay motivated to regulate these buildings.

And that mafioso ex-congressman upstate wanted to do away with scaffolding?

Some of these old decrepit buildings need to come down, so that safe, luxury, Hi-Rise, Apartments can be built!