The gentrification trolley that refuses to die 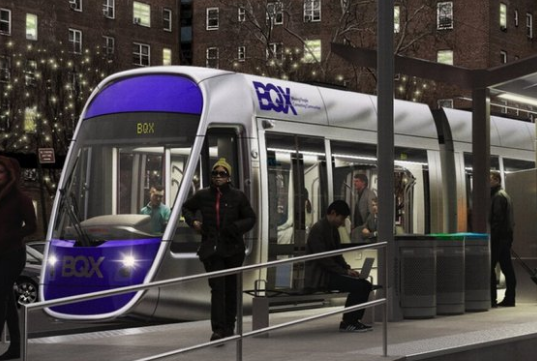 In 2016, Mayor Bill de Blasio announced that the city would begin working on the Brooklyn Queens Connector, a $2.5 billion streetcar that would trace the waterfronts of the two boroughs from Astoria to Sunset Park. The mayor's announcement came after a group of real estate developers somehow had the same idea, and donated nearly $250,000 to de Blasio's nonprofit, but the mayor assured everyone that the BQX would pay for itself, thanks to rising property values.

A year and many "visioning sessions" later, Sunset Park residents fought to take their neighborhood off the BQX's map, leaked documents and independent reports showed the city's funding scheme to be extremely dubious, the streetcar route was found to be susceptible to serious flooding, and the BQX looked to go the way of the carriage horse ban: a full-throated promise backed by stacks of cash that turned into a whisper in the wind.

But the BQX wasn't dead, just dormant. The de Blasio administration released a new plan for the streetcar in 2018 with a shorter, 11-mile route from Astoria to Red Hook and a bigger price tag, $2.7 billion.

This week the city's Economic Development Corporation and Department of Transportation pledged to start presenting their case to the public early next month, with the goal of coming up with a final design by 2023, and finishing construction in 2029—eight years after Mayor de Blasio leaves office.
In the short-term, the city is aiming to get a draft Environmental Impact Statement done by 2021, de Blasio's final year in office.

“From community board presentations and on-the-ground outreach to briefings with elected officials and public workshops, NYCEDC and NYC Department of Transportation are moving forward with a far-reaching process that provides multiple opportunities for feedback prior to the environmental review phase," the city said in a statement.

Thought this interview with the dope from park slope needed to be included, as the Blaz tells Errol Louis (who hilariously presumed that this was dead) that even though the city is earmarking another 2 billion to get the BQX started, it's going to need federal funding. Surely because everyone in the towns that it will traverse and the district council members are all dead set against it. Just quit it, Bill.

Every different kind of transportation requires an extra parts warehouse and repair team. If you keep the technology standard, you get economies of scale. Isn't this obvious? So why do they keep coming up with new slick things? They think we will be dazzled?

If you say "If it ain't broke, don't fix it", your home and your car will collapse on you, right? But it never pays politicians to fix things that aren't broke. They need to play savior. Quietly effective, keep things undramatic but working smoothly, that is so boring, it never wins elections. That's how we end up with hundred year old relays depending on the MTA to machine its own spare parts.

What i dont get is how are they supposed to make those sharp left and right turns? People use the crosswalks and it will take away parking spaces on the curbs.

The crazy turns is what slows down the seven.

The reason we can't have high speed trains in the northeast is
buying up the right of way to straighten the tracks is too expensive.

These creatures are all living in Blah Blah Land, as in Blah-Blah-sio