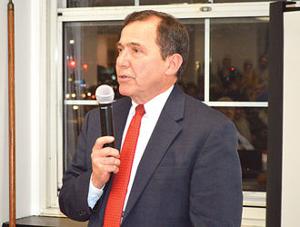 A day after Mayor Bill de Blasio declared the official date for the Borough President’s special election to be March 24, a new, law-and-order challenger announced a last minute bid for the office: former Assistant District Attorney James Quinn.
Though Quinn, a lifelong Queens resident, is reportedly a registered Democrat like the other five declared candidates, both his background and political platform described in the political flyer that was distributed to QNS on Friday makes him stand out among the rest of the field.
“Elect a crime fighter,” reads the first page of his campaign pamphlet.
Quinn served as ADA in the Queens County DA’s Office for 42 years. His platform promises to fight against many of the recent criminal justice reforms that city and state legislators have championed over the past year.
In the campaign materials, he vows to stop the closing of Rikers Island, to stop Mayor de Blasio from building jails in Kew Gardens or anywhere in Queens, and to push back on the bail reform by allowing judges to consider a defendant’s “danger to society” when setting bail.
The platform contains one economic policy idea about working “with businesses like Amazon to bring high paying jobs and careers to Queens.”
Posted by JQ LLC at 6:08 AM

So the pendulum swings back to crime fighter,

Another waste of public money on ALL monstrously failed political hacks. If a cradle-to-grave parasite like Melinda Katz hasn't aptly demonstrated that, then I don't know what.

Move out of QUEENS County, possums. In fact, move out of this entirely hollow, nihilistic, Kafkaesque, Distopian city, altogether (of strenuously failed leadership that has NEVER led by example), and in case anyone STILL doesn't see what a kleptocratic KAKISTOCRACY of 'Monetary Locusts' that City Hall and Albany have been infected with (have ALWAYS BEEN, by two, openly practicing criminal sociopaths named Bill de BLASS-hole AND 'CUOMIGULA'), then go back to sleepwalking, keep pay your cradle-to-grave taxes that will only continue to benefit your completely enabled, sycophantic cabal of entrenched, hyper-corrupt and establishment-rigged political scourges of epic government, humanitarian, ecological, fiscal and spiritual fail!

And, the ever languishing public be eternally duped, bilked, scammed and damned! What? WHAT?? THIS IS NEW???

"We'll use the Democrat and Republican parties, and keep the people busy. And, with matters that have no consequences to our business." --Banker's Magazine

Finally someone with common sense!

"Finally someone with common sense!"
He dose not have a chance to win with all the Krazy Queens Voters !

I really like this guy, he looks like what we need to try and get things back on the right track so of course we know he doesn't stand a chance. I read that he needs 2,000 signatures in the next couple of weeks to get on the ballot but when I did a google search for him, I couldn't find s website or anywhere that I could petition for him, if anyone here knows anything about this, please post..,

What happen to William K. Kregler? He was the Firefighter that ran in 2017.

If he wins this he'll run against Melinda in 4 years.

I like everything he wants to do, unfortunately, Borough President has no power to actually do anything about these crime issues. It's a largely ceremonial post.

Does the Borough President have the slightest bit of power in the area of criminal justice?