Wind dismantles towering wind turbine, causing it to collapse on the street 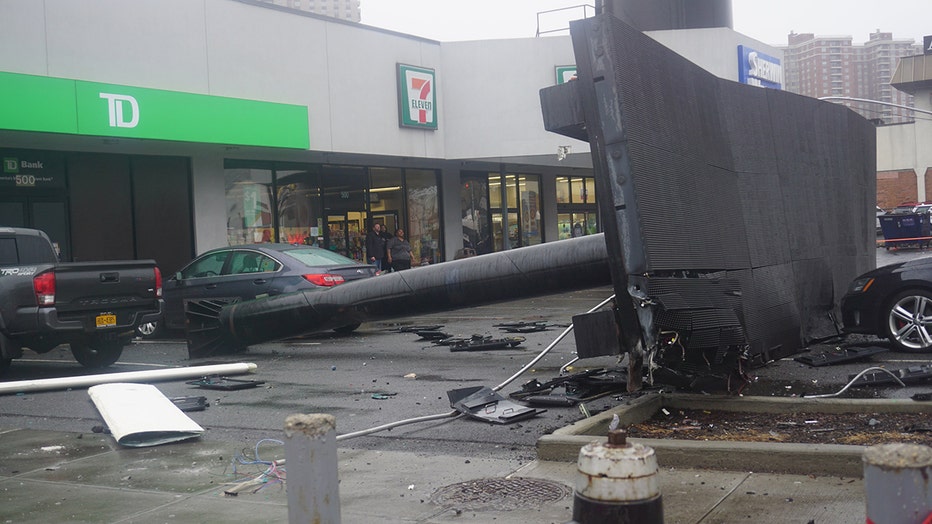 
A giant wind turbine in the Bronx fell from its mast Monday, taking out a billboard and crushing a parked car.

No one was hurt in the 1:20 p.m. incident at Baychester Ave. and Bartow Ave. in Co-Op City.

“It sounded like a cling and then a thud -- like a bing, and then boom,” said CJ Smith, 23, who heard the turbine come down as he headed to his job at a nearby Starbucks.

A massive metal cylinder from the turbine fell onto a parked sedan, crushing its hood.

Eric Johnson, 55, of Co-op City, said the turbine went up about two weeks ago, and he hasn’t yet seen it spin.


“If somebody got killed... coming out the store, somebody has to pay for that," Johnson said. “They didn’t take into account the wind being so strong to bring it down.”

The city Buildings Department issued a stop-work order and a full vacate order for a building at the collapse site that houses a Drugbox Pharmacy, a Sherwin Williams Paint store and a 7 Eleven.

“Due to partial collapse of a large monopole sign structure, the entire property (buildings and lot) are unsafe to use or occupy,” the order reads.

Some Co-Op City residents are looking on the bright side of a frightening turbine collapse – it’ll finally remove an eyesore they’ve complained about for years.

The towering turbine damaged an electronic billboard when it toppled Monday, prompting the city Department of Buildings to order its removal.

Co-Op City residents had complained the sign shined into their apartments at night. They were also steamed about the turbine that sat atop a 195-foot “monopole,” which they’d criticized as unsafe — and ugly. Nevertheless, the building owner obtained proper permits for both structures.

“We couldn’t stop him, so Mother Nature took it down,” Hattie Overman told the Daily News.


The self-proclaimed “proud senior citizen” living in the development since 1998, said the turbine made her uncomfortable before its blades went flying in high winds, destroying a car and taking a chunk out of a billboard. The structure, which stood in the middle of a one-story commercial building with three storefronts, loomed over the nearby New England Thruway and Bay Plaza Shopping Center.
Posted by JQ LLC at 4:06 AM

All wind turbines kill birds hopfully it won't be replaced !

Where is Bronx Barbie and her green bullshit on this ?

Wind Turbines kill more than 500,000 birds a year, particularly hawks and falcons, at present. This is the left's alternative energy answer to fossil (coal) based fuel. Presently, turbines are going up across the country and stand a height of 500'. Most of the wind parks are over a 100 turbines each. Each turbine of that size takes about 150 acres of land to support it. The concrete base is at least 50' deep. How deep was your base, NYC. They produce high frequency noise, ice throws, shadow flicker and interfere with doppler radar. The 500' high turbines can produce 4.2 megawatts of energy each. 1.5 megawatts can produce enough power to run around 200 standard (1,500 sq ft.) houses.

"How deep was your base, NYC"

That land was the former Frontier Land kiddie park. Its all sand and silt.
That turbine was put up almost overnight, I doubt a proper foundation or caisson was ever sunk down.
The jackass city never had the former Frontier Land rezoned from preventing the owner of the property and partners from pulling this shit.
That monstrosity was also near Pelham bay park and salt marshes. It killed dozens of bird & geese in the 12 hours it was in operation. --Likely what damaged or unbalanced the blades.
Must be 2 dozen dead birds on the 7-11 roof, some cut in 1/2.
And not a peep of that in the dirty corrupt news or AOC's big mouth---And that's her district !!

The owners plan was to partner with the company that built & installed it to power the huge commercial billboard and sell the surplus 1.8 or so megawatts of electric back to Con Ed. No benefit for the community.
It was strictly done in speculation for greed & profit.
Co Op city generates it own electric, the public was fed pure bullshit and the local politicians and hired engineers were asleep at the wheel.

Wind Turbines life spand is less than 25 years and where do you think they will all go after that ?
In our landfills and shipped to a slave nations where prople (mostly children) die from dismantling our toxic electronics. What dose AOC or How Dare You girl say about that ? Green Deal My Ass !